Share All sharing options for: Jake Delhomme and the Browns' Offense Look Alive in 27-24 Victory Over Packers

The Cleveland Browns offense got off to a great start against the Green Bay Packers in the team's first preseason game of the year, paving the way to a 27-24 victory for the Orange and Brown.

More important than having the "W" on the board though is the way the Browns played early on. Even kicker Phil Dawson, who has been with the team since its expansion season in 1999, couldn't help but notice a different atmosphere:

"To march down like that with confidence right out of the chute, I don't remember ever seeing that in our first preseason game," said Dawson. "We may not execute like that every game, but now we know what we can do if we execute."

Let's get to my first comprehensive review of a Browns game this season... 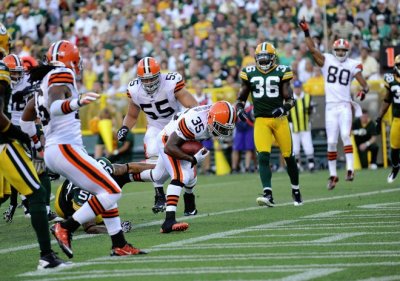 RB Jerome Harrison punched it into the end zone for a four-yard score on QB Jake Delhomme's first and only series. 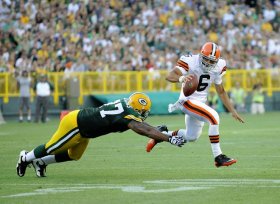 QB Seneca Wallace rolled out to his left and fired a touchdown to WR Brian Robiskie on his first drive. 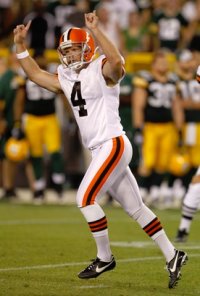 Up next, the Browns head home to take on the St. Louis Rams. Delhomme should see a few more series in that game, but hopefully the Browns' defense has more success since they'll be facing a team on the complete opposite end of the spectrum of the Packers' offense.