Share All sharing options for: Rainfest Causes Fumbles, but Browns Show Ability to Overcome Adversity in 19-17 Loss to Rams

I always find it a little funny when people try to debate the final score of a preseason game with statements like, "if the Browns would have kicked a field goal here..." or "if we would've left McCoy in for that last drive..."

In an ideal world, in a regular season match up between the Rams and the Browns, I would like to believe that the Browns have the major advantage, as stated in my pre-game writeup Saturday morning. The Rams did a nice job putting together their first drive of the game, but overall what I took away from this game was that this team can overcome adversity. Granted, it's not like there was really too much on the line for the first stringers in a preseason rain-fest against the Rams, but you take what you can get in the preseason. 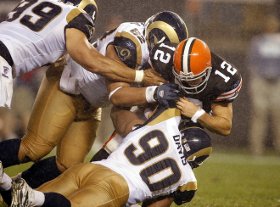 QB Colt McCoy was banged around by the Rams' defense thanks to the lack of depth on the Browns' offensive line. 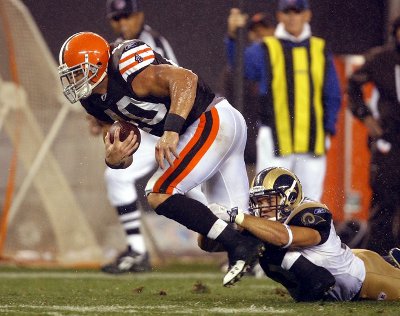 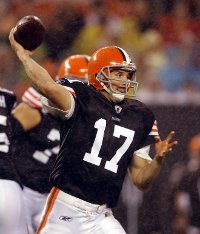 QB Jake Delhomme was in command of the offense again after the team overcame their early fumbles.

Next up, the Browns will battle the Detroit Lions in the Great Lake Classic. The big news this week though will be the fact that Montario Hardesty is set to return and could see action in that game.