Delhomme is Ready for the Regular Season, Defense Looks for Pass Rush in Browns' 35-27 Loss to Detroit

Share All sharing options for: Delhomme is Ready for the Regular Season, Defense Looks for Pass Rush in Browns' 35-27 Loss to Detroit

As a Cleveland Browns fan, I think we're put in a very difficult situation now in terms of judging our expectations heading into the regular season. After the offense was run so poorly most of last season by Derek Anderson and Brady Quinn, we rated our passing games as one of the worst in the league. Heading into this season with Jake Delhomme as the starter, the expectation was that he would hand off to the running backs for the most part and try to manage the game. Now? I'm not so sure... 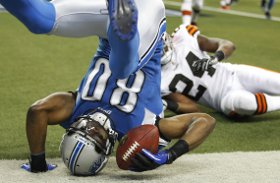 The Lions scored on a touchdown pass to WR Bryant Johnson on their first drive, only took three plays. 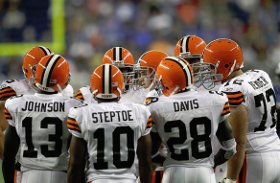 The second- and third-stringers will have a chance to showcase their talents against the Chicago Bears.

The Browns will have to start preparing their cuts soon as their final preseason game approaches this Thursday against the Chicago Bears. It's a short week for the game, but that means we're only closer to the debut of the regular season!

P.S. I'll have a recap of the Official DBN Fantasy Football Draft up Tuesday or Wednesday.