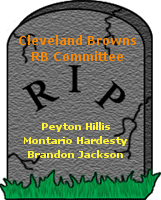 Be afraid...be very afraid if you are a running back on the Cleveland Browns. I'm talking about you, Chris Ogbonnaya.

Heading into the season, we thought the front office had solved the running back depth dilemma by signing free agent Brandon Jackson to a contract. With Montario Hardesty returning and Peyton Hillis as the starting back, it seemed like perhaps the deepest position on offense.

After eight weeks into the NFL season, we're down to Ogbonnaya. Jackson suffered a toe injury in camp and was placed on the injured reserve. Hillis has been bothered by a combination of strep throat (that has passed) and a hamstring injury (which is current). This past Sunday against the 49ers, Hardesty suffered a calf injury. When speaking with the local media today, Browns head coach Pat Shurmur said that Hardesty will miss games with a moderate tear in his right calf, but that it's too early to tell exactly how many games he will miss.

The teams plan on bringing in a few running backs for tryouts this week. The media asked who the next running back would have been on Sunday had Ogbonnaya gone down, and Shurmur said it would've been fullback Owen Marecic. A reporter also asked about the possibility of using Joshua Cribbs at running back, something Shurmur did not shoot down nor confirm would happen. Shurmur said Hillis is still day-to-day.