Announcers and casual fans can see defenders coming clean at the quarterback and immediately place the blame on an individual player.  Sometimes, they are correct in doing so.  But too often, observers of the game are unable to correctly recognize blocking responsibilities.

"BoB" stands for Big On Big, Back On Backer.  It is a man blocking scheme, focusing on blocking defensive linemen with offensive linemen (big on big) and blitzing linebackers or defensive backs with running backs (back on backer).

For simplicity's sake, I'll illustrate these protections from 21 personnel (2RB, 1TE) against a 4-3 defense playing in a 7-man front.  In other words: "normal" offense and defense. 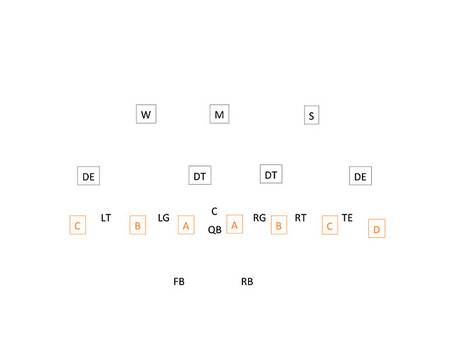 The five offensive linemen will be responsible to block the four DL (Big on Big). 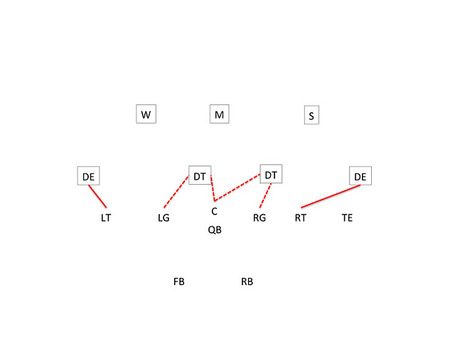 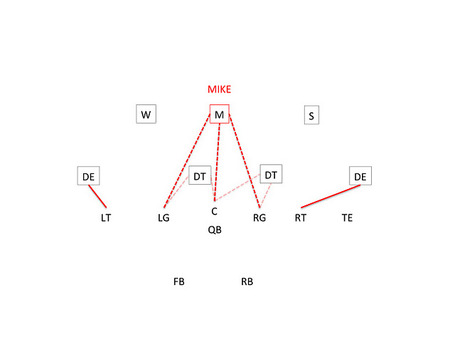 The backs are each responsible for a side, with the FB taking the SLB and the RB taking the WLB (Back on Backer).  Here, the backs "check-release", staying in to block for a 1001 count while checking if their assignment is coming on a blitz, and releasing into the pattern if they drop in to coverage. 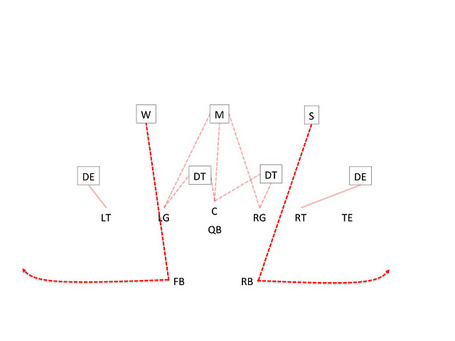 Slide protection is just an area scheme. In our offense, we mainly use it to protect on play-action fakes of the zone runs and for designed rollouts of QB Colt McCoy. As opposed to the man-to-man protection of BoB, slide is a zone protection. Each blocker takes the gap to one side, here the left: 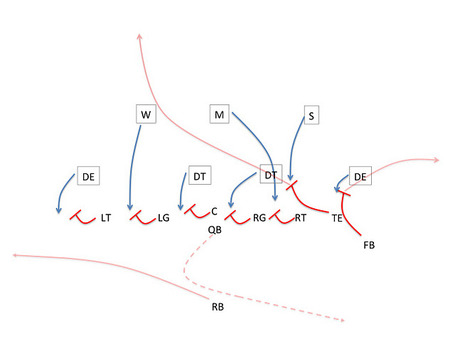 Typically, slide protection is "sturdier" than BoB, but it can result in mismatches (edge rushers on backs, OTs on DBs) and it can be harder for backs and TEs to get out into their routes if the defense doesn't bring pressure.

For the most part, our offense uses Slide protection on play-action passes off of our zone runs (because the initial action can look just like the zone runs) and on designed rollouts for Colt McCoy. For instance, the play above is the blocking on for the play that resulted in touchdowns against the Cincinnati Bengals (Benjamin Watson) and the Miami Dolphins (Joshua Cribbs).

Also called "half-slide", you could probably guess that this is a combination of BoB and slide protection. Typically, teams will block man-to-man to the side of the back in protection, while sliding away from the back from the first uncovered lineman or the "bubble": 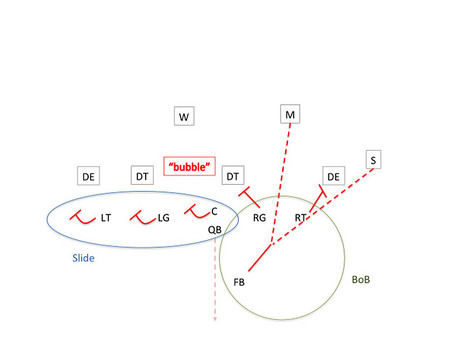 While combo protection is the most flexible of these protections, the "seam" area is always a concern. Obviously, on either side you get the strengths and weaknesses of either protection.

If the in-the-box numbers change, say the offense goes to a single back set and the defense stays in a 4-3, the offense obviously no longer has everyone blocked in any of these schemes.  The back will have what is known as a "dual read".  He is responsible for both the MLB and the WLB if either (obviously not both) come on a blitz. 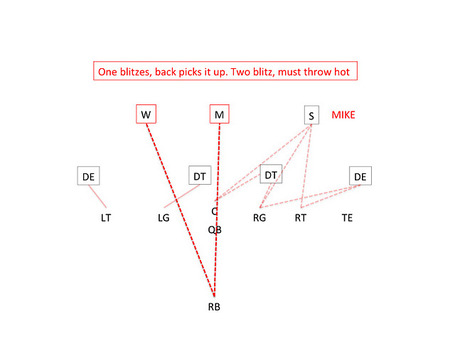 In the past, Guards have also been asked to dual read, but this practice has largely been blitzed out of existence.

If both of the running back's dual reads are coming on a blitz, the Quarterback has to execute what is known as a "hot read".  I'll have more on hot reads later in the week, but these are basically quick routes to attack the voids left by blitzers.