Breaking Down Random Plays from the Browns Offense

Share All sharing options for: Breaking Down Random Plays from the Browns Offense

Our offense is bad. The good news is we were able to see some success between the 20s last week against a fairly poor Rams defense that only got worse with injuries during our game.

Our weak point last week was easily red zone offense, as evidenced by four Phil Dawson field goals and zero touchdowns. Contrary to frustrated fan opinion, we did try to pass the ball in to the endzone on multiple occasions, we just couldn't execute.

After the jump I've highlighted a few of the areas where I think our offense needs improvement, as well as some things we did well against the Rams. While there are more positive plays than negative ones below, I am not attempting to place this game in a positive light: it was a soul-crushing loss, and I don't think there are any excuses for not scoring a touchdown against the Rams defense that was on the field last week. We played a bad game but that doesn't mean it was all bad or that we have to linger on that as fans. Enjoy.

Our offensive line still has problems getting to the second level in zone blocked running plays. Our offensive line should come off the ball with double teams on the DL, looking to knock them off the ball (inside zone) or spread them horizontally along the line (outside zone). During this time, they should be sorting through any stunts or slants by the line and getting up to the linebackers as quickly as possible. Right now, we're bad at this: 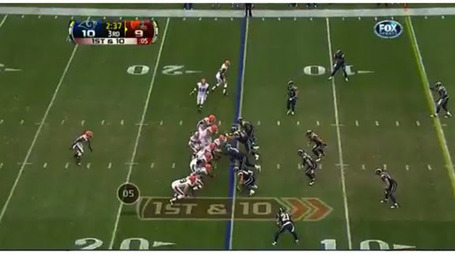 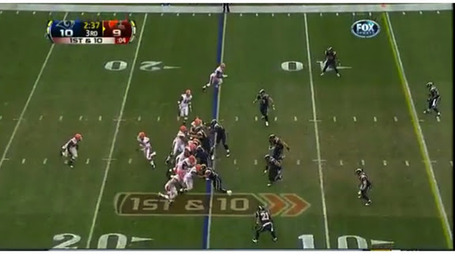 Look at how close to the line of scrimmage the LBs are before they get blocked: 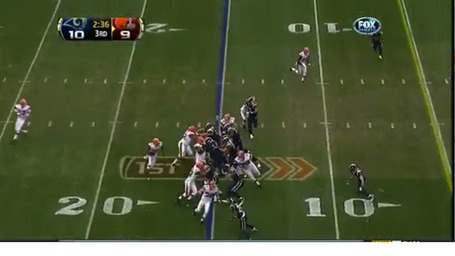 And it doesn't end up well. 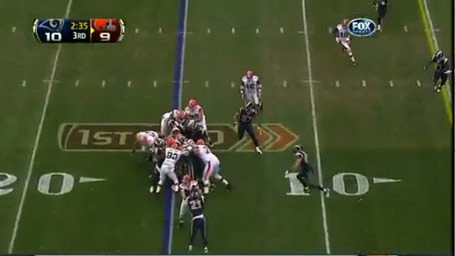 Here's another poorly blocked running play. This play is similar to the 49ers sweep I wrote up recently; the playside of the line blocks down, the playside guard pulls, and the backside tries to cut off pursuit. The back heads downhill to suck the LBs up and then bounces out around the edge. Notice how Pinkston and Mack are responsible for the weakside backer here: 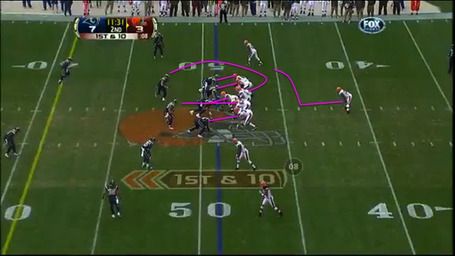 As you can see, the initial back action works and sucks MLB James Lauranaitis up into the hole. One of Pinkston/Mack should be there to block him, in this case it's Pinkston. Mack has his head up looking for the backer, but you can see Pinkston's head down here as Lauranaitis flies right by him: 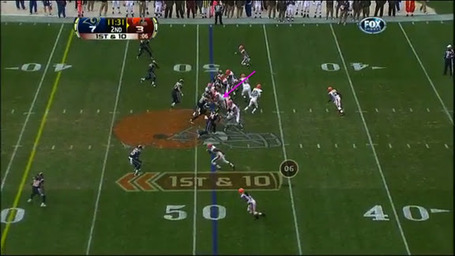 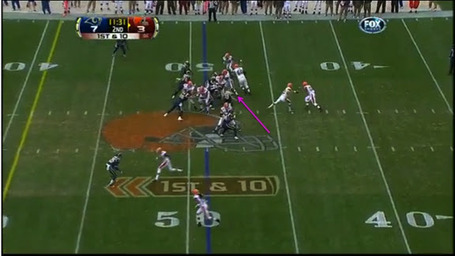 Here you'll notice that everyone on the playside of the run did their jobs and sealed the edge. But we have two blockers on one guy, and Lauranaitis is in the backfield untouched 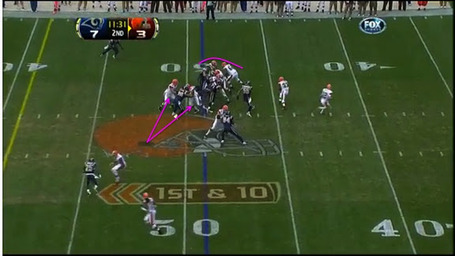 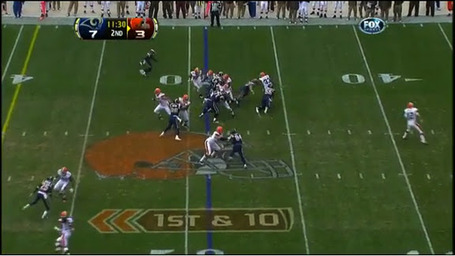 A lot of the problems we are having in the passing game are timing-based, and the mistakes we are making are amplified by a lack of quality protection. As with most "West Coast" passing games, ours is based around the timing of the receivers' breaks with the QB's drop. If the receivers are not in exactly the right place at exactly the right time, it's not good for us because we don't have the physical talent anywhere to overcome a lack of precision. This is what Pat Shurmur means by a "small margin for error."

Here, Colt is simply not in sync with Norwood. With this out route against man, Colt expects Norwood to plant, cut, and burst out of the route. If you watch closely, you'll see Norwood give a little juke to his defender before he breaks. This slows the route just enough that the timing is off, and the ball sails incomplete. Norwood is the WR to the top of the screen:

Again here, Colt is throwing an out route and not on the same page as the receiver. This time it's RB Chris Ogbanaya out of the backfield. He'll run an out to the top of the screen.

Against this C2 zone, we are getting a hi-lo stretch on the CB. He sinks to cover the deep route, leaving no one to cover the flat. Colt expects Ogbanaya to plant and cut hard to the sideline while drifting for depth here. Ogbanaya looks more like he is trying to sit in a hole in the zone and isn't in that spot:

Note for both of these throws that Colt is a little high on each. While these balls would be hard to catch, they are catchable and would be easier to catch had the QB and receiver seen the same thing and expected the pass to be complete in the same spot.

In this last example, McCoy just isn't fast enough at getting through his reads. You can't see what we are running down the field, but it could be any concept with three vertical routes. The C2 defense sinks to cover these vertical routes and the RBs curl under the linebackers. Colt doesn't have a whole lot of time here, but he has enough for his drop and one or two hitch steps.

Particularly if Colt hits FB Owen Marecic here as he still has some forward momentum (i.e. before he stops completely on the Curl) we have a good chance of picking up this first down. Instead, it's a punt:

We had some good runs, but I don't have much in this area. Our best run throughout the game was probably the Inside Zone run with a designed cutback. We show basically the same motion as the outside zone, only as those LBs fill to the playside, FB Owen Marecic and our backs would cut back against the grain where we had numbers and space.

We also gameplanned this run well. The first play in this video is a PA pass off of that inside zone action. But watch the defense's reaction to TE Ben Watson in the flat. Two plays later we called the run off of that pass and broke a big run part of the reason why is the defender that follows Watson out into the flat aggressively. We saw what the defense was doing to us and we exploited it:

The great thing about a timing-based passing game is that when it's working we can gain first downs before the other team can even figure out what happened.

While many fans have criticized us for running 1-yard routes on 3rd and 2, the plays we are running in that situation are sound and designed to pick up the first. One of our favorite 3rd and short plays worked perfectly against the Rams. This concept has been one of Colt's favorites for quite some time; one guy shoots to the flat, and another runs to a depth of about 5 yards, turns around, and just gets open. The second receiver has the freedom to run away from man or sit in a hole vs zone. Where Colt throws is based on the defense. If no one follows the guy into the flat, we throw it to him and let him run for the first. If someone goes with him, we throw to the next guy in. If they squeeze him with a double-team, Colt goes to the next guy over, who the defense shouldn't be able to double.

One great thing about this play is that defenses can't change their look too much between the time of the snap and when the ball needs to be thrown, so it's hard for them to hide their coverage.

Here against C2, the CB can't both squeeze the curl and also stick with the guy to the flat. He goes to the flat and we throw to the curl, getting a first down: 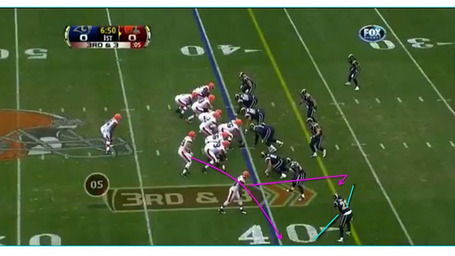 Another great throw by Colt was this corner route to TE Ben Watson against C2. With this corner route and the quick route to the flat by Evan Moore, the CB is again in a bind; he can't both drop off deep and cover the flat, and we exploit him. 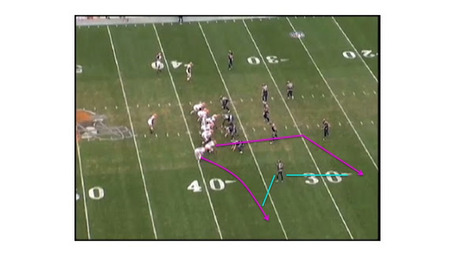 A great sign by our offense in this game was the willingness and ability to get creative. We saw end arounds to Cribbs and Little, and we saw some "trickeration" with the double reverse pass, and we saw this great twist on the "drive" concept, which is one of our favorites.

In "drive", one receiver runs a shallow cross while another runs an in or "basic cross" behind him. This is a staple of many passing games. We love it, and we also run plays off of it where the shallow man will run a "whip" or "pivot" route, heading in on the cross only to pivot back outside. 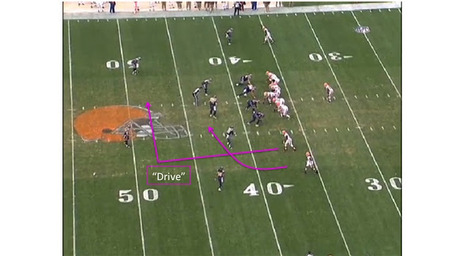 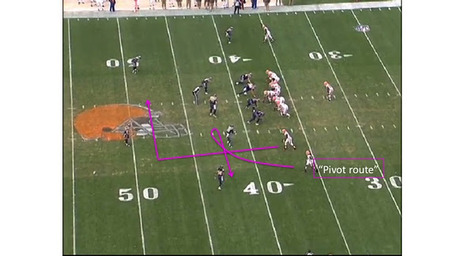 This time, we ran neither. Cribbs heads on the shallow, then whips out, but he keeps turning and runs deep along the sideline. Meanwhile, Greg Little fakes the in, sucking the safety up, and then bursts up the middle seam left by the safety: 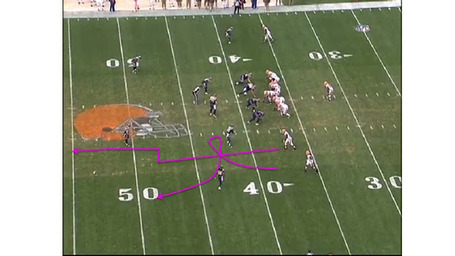