The San Francisco 49ers offense we saw last week was a great example of one that had an identity yet remained unpredictable.  The 49ers are best at running the football with RB Frank Gore and an offensive line that features three first round picks in LT Joe Staley, RT Anthony Davis, and LG Mike Iupati.

But they also had plays designed to disrupt our defensive keys and punish us for attacking their bread and butter plays. Passes to NT Isaac Sopoaga and LT Joe Staley were off of play action using the same formations and personnel that they use to run, and off of the same initial action as their inside and outside zone runs, respectively. In other words, those passes looked exactly like their runs.

One play that illustrates how the 49ers overwhelm their opponent with size and (tactical) leverage is their version of the sweep play.  This play is a modern adoptation to classic football, namely the Power Sweep used famously by Vince Lombardi.

You get a seal here, and a seal there...

Lombardi's sweep used two pulling guards and a fullback to get numbers at the point of attack and create an "alley" for his back. The first guard would kick the "force" player out, the fullback would seal the defensive line inside, and the second guard would lead the running back through the hole. Here is Lombardi's play against an "odd" front: 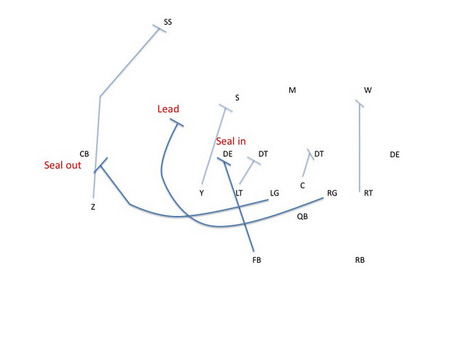 Harbaugh has tweaked the play to fit the modern era with a few adjustments.

One major change you'll notice is not pulling the backside guard. To still achieve the same blocking pattern as Lombardi's sweep, Harbaugh uses the fullback in the guard's place, while other players partake in a merry-go-round of responsibilities to accomplish the same goals.

Another change to the play is running it from the I formation as opposed to split backs. This ads a bit of misdirection as a defense sees the fullback and Gore attacking downhill to begin the play. This downhill start is then bounced out. The 49ers hope to suck linebackers up, only to defend gaps that cease to exist when the pull occurs. More on this later.

Regardless of the specific assignments, the goals of the play remain the same. The playside of the line blocks down, the backside reach-blocks, the first puller seals the "force" player out, and the second puller leads through the hole. Here's what Harbaugh's version looked like: 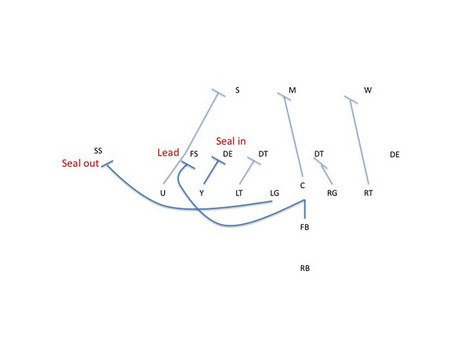 From a defensive perspective

Early in the game, the Browns failed miserably at defending this play. While we comitted to 9-man fronts and had a defender for each gap, but the 49ers were able to create new gaps that we were too slow to fill.

In our 4-3 Over front vs two backs, the linebackers have two gaps they know they are responsible for, with a third gap they have to fill based on the flow of the backs: 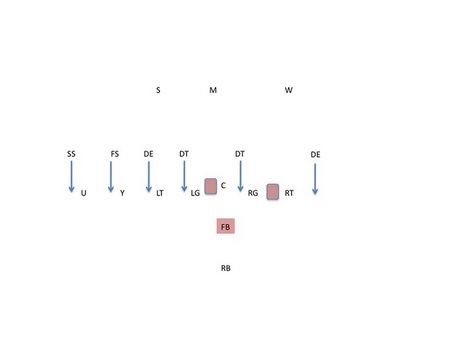 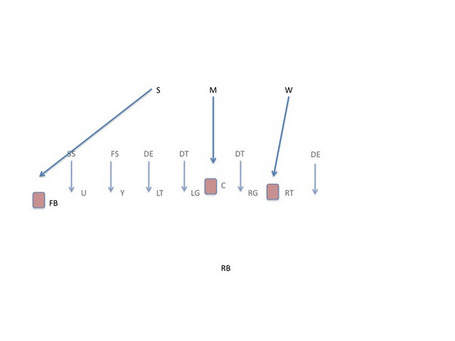 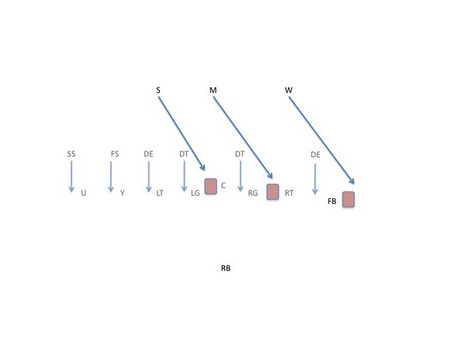 This is why having Gore run this play from the I and attack downhill off the snap is a perfect misdirection against us; when the LBs read that flow, they assume their gaps are these*: 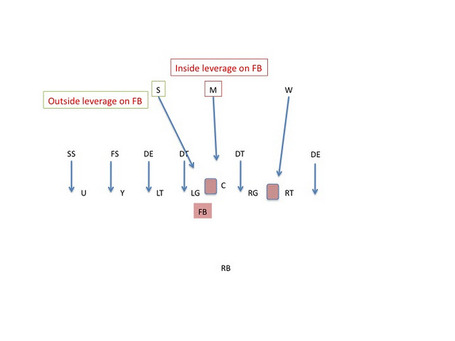 In reality, with the pulling guard and delayed motion of the fullback, the extra gaps would be somewhere out here*: 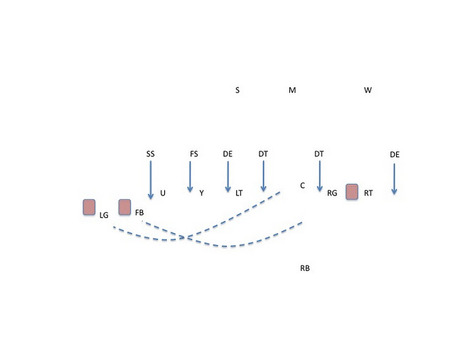 Without "Sam" Scott Fujita and "Mike" D'Qwell Jackson keying the pulling guard, the 49ers were able to seal them inside, kick SS T.J. Ward out, and create a seam for Gore:

It happened again in the second quarter:

Luckily, we made adjustments in the second half to stop the sweep. We didn't do anything big tactically, we just were ready for the play and executed our assignments quickly before the sweep could develop. One thing the coaches probably did change was the keys for reading the offense's play.

One adjustment to watch is our big DTs Ahtyba Rubin and Phil Taylor were able to stop the interior linemen from leaking up to block Mike LB D'Qwell Jackson. If you watch closely, you can see Rubin shift slightly inside before the snap on this play. He attacks the center, who can't leak to the second level.

The next adjustment to notice is the hard, downhill attack of SS T.J. Ward. He aggressively hits the guard 2-3 yards behind the line. Ward turns the 49ers' "alley" into a narrow hallway and clogs the play from the outside-in.

To finish things off, LDE Jabaal Sheard makes a great play; he feels the down-block from the outside, braces himself to attack the play inside-out, sheds the block, and makes a tackle for loss:

Even if Sheard doesn't make a great individual play, Jackson has outflanked Iupati, who is forced to pull/fold here because C Johnathan Goodwin can't leak up through our DTs. Jackson would become that one extra player in the alley we need to properly defend the play. With the "alley" clogged enough, backside pursuit in the form of LB Chris Gocong and RDE Jayme Mitchell can chase the play down from behind.

*this is not how we actually defended the play, but a simplified run fit that was cleaner and easier for me to draw up.