The playoffs began for the Official Dawgs By Nature Fantasy Football League last week, with Bernie19Kosar and Brownsyup being on the bye. Sometimes it is amazing how the slight difference in the seed you finished with can make or break your chances. 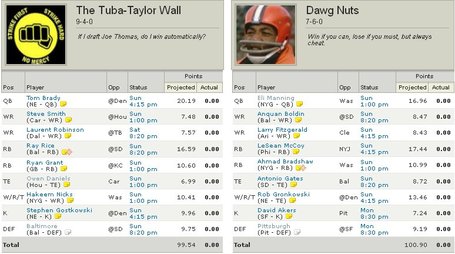 I think the No. 1 seed is in a bad spot this week. Ryan Grant as the second running back is suspect, and Tom Brady producing is not a given due to what Denver's defense has accomplished lately. Meanwhile, Dawg Nuts has all of the players who are red-hot as of late, including Eli Manning, Larry Fitzgerald, and Gronkowski. 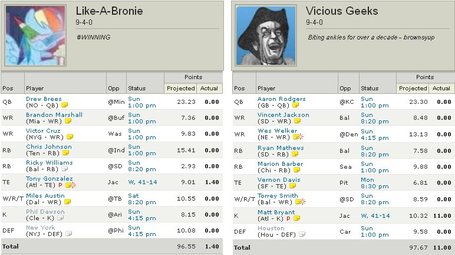 This match-up is about the quarterbacks, because Drew Brees and Aaron Rodgers will have huge games this week. At other positions, these teams are pretty evenly matched. The "X-factor" could hinge on whether Titans running back Chris Johnson is able to "go off" on the Colts, or have another one of his disappearing acts.

Vote in the poll below for who you think will end up meeting in the Championship next week!