There were no room for upsets last week in the Official Dawgs By Nature Fantasy Football League, where the top two seeds won their respective matchups and advanced to this week's Championship game. Who will win it all? Will it be the top-seeded Bernie19Kosar or the second-seeded Brownsyup? Both team's rosters are listed after the jump. 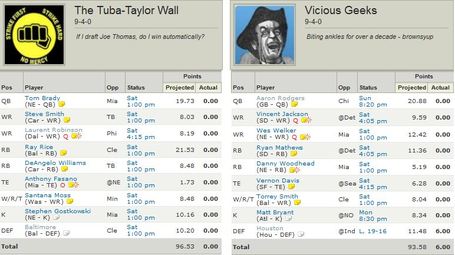 Brownsyup is really hurting at the running back position at the wrong time. His bench includes Darren McFadden and Marion Barber, both of whom are likely out. Looking at his roster right now, it doesn't exactly spell "championship." I think Bernie's team fares a bit better this week, having a good crop of receivers, Ray Rice (after the game he had a few weeks back?), and the Ravens' defense. He'll need to find a new tight end though. I'm projecting Bernie to take the championship this year.