Punch and Counter-Punch: the Hot Route and the Zone Blitz

Share All sharing options for: Punch and Counter-Punch: the Hot Route and the Zone Blitz

You'll often hear coaches talking about "staying on schedule" or "staying ahead of the chains." Against the Arizona Cardinals, we found ourselves behind schedule.

On 3rd and 11, the Cardinals saw the perfect opportunity to dial up a blitz, and they did just that. They sent a linebacker and their nickel corner on a blitz, while dropping a defensive end into coverage: 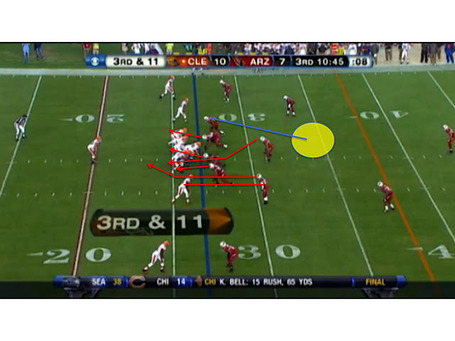 There are two things to watch during this play, and the first is a great sight-adjustment by QB Seneca Wallace and WR Greg Little over the middle.As Little sees the corner blitz by him, he bends his route inside, into the vacated space left by the corner. Seneca breaks off his drop and fires the ball in rhythm, as Little is carrying his momentum forward toward the first down marker. This all happens on-the-fly, as a reaction to the blitzing DB.

You'll notice in the video that Little hesitates slightly and slows up for the ball. While it seems a bit nitpicky, if Seneca and Little are on exactly the same page, Little can catch that ball in stride with enough momentum to be able to barrel forward for the first down--this is the type of precision that a ball-controlled passing team needs to have.

The second thing to watch is the protection. This type of sight adjustment is usually run as a "hot" route, a concept I previously discussed here. Basically, if the Browns don't have a player to block that corner, they need to "throw hot." But it looks to me like we did have enough to block the corner, even if the DE continues to rush.

Whether it was a miscommunication and a mistaken "hot" route or just a built-in sight adjustment that functioned like one, it was a good play for us but not quite good enough in the end:

Though hot routes are a great way to beat the blitz, they are no magic cure-all. Every tactic in football is vulnerable to a counter move. For hot routes, that counter move is the zone blitz, namely one in which one player blitzes and another drops into coverage to take his place.

After the Cardinals saw us get 10 yards on Wallace and Little's sight-adjustment in the play above, they brought a similar blitz hoping to force the same sight-adjustment. Only this time, they were ready for it.

The numbers are a bit different this time because there are two backs in the half-slide protection. To the left, C Alex Mack, LG Jason Pinkston, and LT Joe Thomas Almighty are in slide protection along with RB Chris Ogbonnaya. Together, they can block the 1 DL, 2 LB, and 1 DB (out of the picture) in the box to that side.

To the right, RG Shawn Lauvao and RT Tony Pashos are in BoB protection, with FB Evan Williams responsible for the inside backer if he comes on a blitz. The only person not accounted for is the CB to the offense's right (also off the screen). If he comes, Seneca must throw hot. 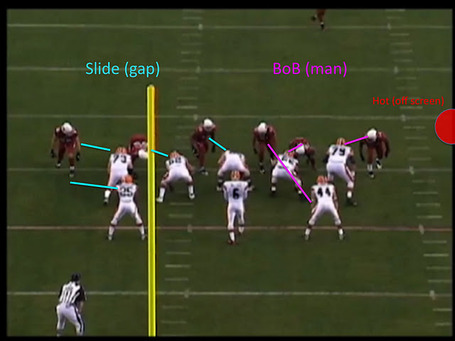 As you'll see, the CB (hot player) does come on a blitz. Just like on the previous play, Little makes the sight adjustment as the CB passes him on the blitz. Seneca sees the blitz, looks to throw hot, but a linebacker has dropped off to cover the route. This is the counter to our hot route: 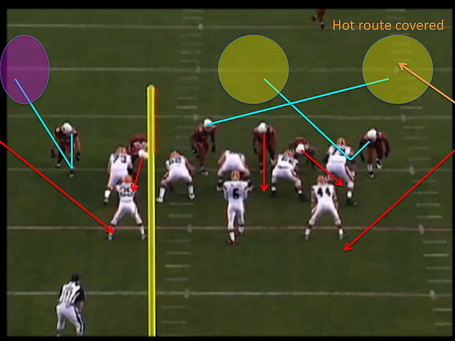 Luckily for us, Seneca made a great individual play and avoided the free rusher. As he rolled to the right, Little kept working and followed the QB scramble rules for this play: 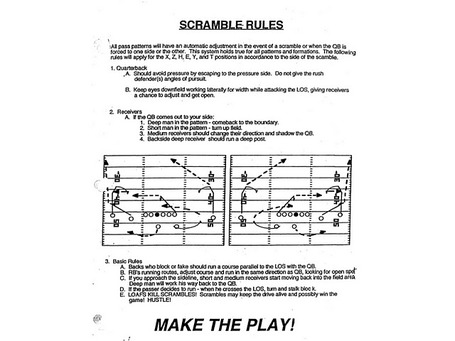 And the end result of the play was a pretty sight for Browns fans:

Thanks to great individual plays by Seneca Wallace and Greg Little, we were able to overcome our tactical disadvantage and score.