Share All sharing options for: Around the Pound (2/13): Pluto on this Week's Cuts

In today's edition of Around the Pound, we take a look at Terry Pluto's thoughts on the Browns' defense after their recent cuts, a picture of a snowman that you just can't top, and more.

Pluto: Browns' Roster Cuts Signal a Switch to the 4-3

With the Browns releasing four veterans on the defensive side of the ball this week, the Plain Dealer's Terry Pluto believes the switch to a 4-3 will benefit the ability of general manager Tom Heckert to find the appropriate personnel:

Despite all the talk about the West Coast offense, the real story of the switch to the 4-3 is it's the defense that will have more new faces. The only certain starters are Sheldon Brown, Joe Haden, T.J. Ward, Fujita, Gocong and Rubin. Starting safety Abe Elam is a free agent, and he is viewed ideally as a backup by most teams. Heckert's experience has been finding players for a 4-3, and believes it's a little easier to do so than for the 3-4.

Pluto also mentions that the Browns released Coleman because they want their defensive ends in the 4-3 to both be pass rushers, something they did not feel Coleman excelled at. Among the other topics Pluto talks about in his column is how Shawn Lauvao might be the team's starting right guard next season and how some of the team's new assistant coaching hires will help.

I usually don't highlight many Bleacher Report articles here on DBN, but I decided to here. The article mentions several trades in history that have involved the Cleveland Browns; I'll let you decide whether they are in the correct order. For some reason, the deal for Peyton Hillis only received an "honorable mention."

-Honorable Mention: Peyton Hillis to Cleveland
-No. 20: Braylon Edwards to the Jets
-No. 19: Paul Warfield to the Dolphins

The first overall one is sure to sting a few Browns fans too.

For the first time in weeks here in Cleveland, temperatures rose above very cold temperatures. In fact, temperatures reached 40+ degrees and are expected to get to the mid-40's and possibly low-50's later in the week. All of the snow that is on the ground is likely to melt during that time, so I figured it was time to build my annual snowman. Here he is, standing in at around 7 feet tall: 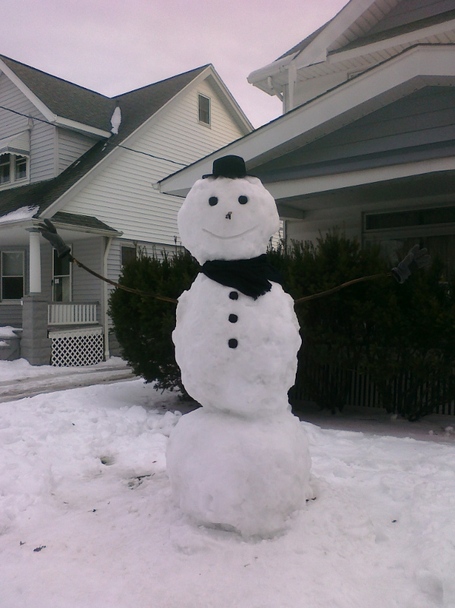