Share All sharing options for: A Closer Look at the Cleveland Browns 2011-2012 Schedule

The NFL released the regular season schedules for all 32 teams on Thursday. Let's take a closer look at how the Cleveland Browns' schedule was constructed, including the unusual end-of-the-season stretch against two of our division rivals. 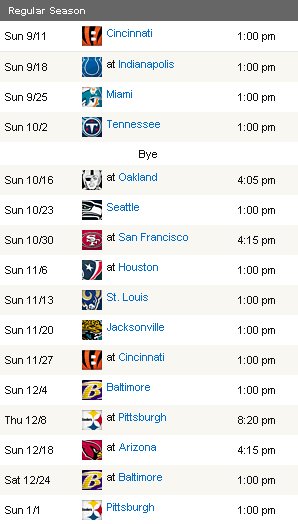 The official schedule can be seen in the image to the right. Last year, we kicked things off against Tampa Bay on the road and then Kansas City at home. Most of us projected that to be an automatic 2-0 start for Eric Mangini and the Browns, but as we all know, the Browns fell victim to both teams. We thought it was because the Browns were terrible at the time. Well, we weren't as good as we had hoped, but it was also a case of Tampa Bay and Kansas City surprising everyone by being playoff contenders throughout the entire season.

Case in point: don't take anyone for granted. Just as I feel thrilled to start off the season against a Bengals team that seems to have a quarterback mess right now, I'm sure Bengals fans are thrilled to be facing a team with two new systems with potentially minimal practice time for them due to the lockout. The two teams met back in 2005 to start the regular season. Cincy Jungle recalls that game and the season for the Bengals:

The last time the Bengals opened the regular season in Cleveland was September 11, 2005. Carson Palmer posted 280 yards passing against the Browns and Rudi Johnson recorded 126 yards rushing on the ground. Cincinnati's 27-13 win kicked off a magical 11-5 season that would end when Kimo Von Oelhoffen crashed into Palmer's knee early during Cincinnati's Wild Card game. Some will obviously point to this moment as the beginning of the end to Palmer's confidence throwing the football in a hostile pocket.

In Week 2, the Browns arguably have their toughest-looking game of the season until Week 12 against the Indianapolis Colts. If I can take a positive away from getting the Colts in Week 2, it is the fact that they always seem to be terrible at defending the run early in the season. I know the Browns are going to a West Coast Offense, but they might want to consider running the ball all day long against Indianapolis. It worked early on for Arian Foster and the Texans last year.

Next up, the Browns come back home to Miami and Tennessee before having a Week 5 bye. This schedule was tailor-made for the Browns to have a strong start to the season. As far as I am concerned, Cincinnati, Miami, and Tennessee do not have very good quarterbacks, and we face all of them at home. The Colts are tough, but getting them during the early stretch of the season is the best time to pull off an upset against them.

After the bye, the schedule makers decided to give the Browns a heavy dosage of West Coast teams (must be a consequence for going to a West Coast Offense). I would not call Oakland, Seattle, or San Francisco legitimate playoff contenders. I don't agree with the Raiders getting rid of Tom Cable, the Seahawks were a bad team last year who made the postseason because of their terrible division, and the 49ers need to find an answer at quarterback.

Two of our next three opponents are Houston and Jacksonville, two teams the Browns seem to play quite often despite not being in their division. The Texans will probably be teetering around a winning record again and underachieve, but they are probably our next toughest opponent since the Colts game. The Jaguars defeated us last year on that horrible Maurice-Jones Drew catch-and-run at the end of the game, but again, they are a team that never seems to click on all cylinders consistently enough.

Sandwiched in between those two games is a contest against the Rams, where head coach Pat Shurmur will face his former team. It will also likely be a regular season quarterback matchup of Colt McCoy vs. Sam Bradford. It might not spell excitement, but it is still a storyline.

Heading into Week 12, there are six games left. Five of those six games are against teams in our division, with the outlier being the Arizona Cardinals in Week 15. Is it bad to have that many division games to close out the season? I don't think so; it's just unusual. If anything, it gives Cleveland the opportunity to build some confidence against lesser teams prior to that point. If Cleveland has a positive record such as 6-4 heading into that stretch, it makes the games more meaningful for both parties involved.

In Week 13, we face the Ravens in Cleveland. That is a Sunday game. Four days later, we travel to Pittsburgh for our only scheduled prime time game of the season, an 8:20 PM start time on NFL Network (Thursday) against the Steelers. The Browns did not have any prime time games last season, but a new coaching change and the excitement that Peyton Hillis brought last year are the probable causes of getting one this year.

After just facing a physical team in the Ravens four days earlier, will the Browns be able to match the intensity of the Steelers? Pittsburgh faces Cincinnati in Week 13, a team that is probably considered a much softer opponent. Pittsburgh comes to Cleveland in Week 17 to finish off the year. This is the second straight year that the Browns have finished the season off with Baltimore and Pittsburgh back-to-back, which also seems a bit unusual.

Some people questioned why the Browns had so many division games at the end of the season. Let's take a look at how all the AFC North teams compare in terms of the division games being spread out:

Overall, the four teams have somewhat similar formats. Everyone only faces one division team before Week 9. Baltimore and Pittsburgh have some more games in between after the first half of the season. Cincinnati is really in the same boat as Cleveland. They face division opponents four straight weeks toward the end of the season

I scanned through the schedules of all the teams in the league, and it did appear as though Cleveland was the only team who did not face two teams in their division for the first time until Week 13.

Feel free to comment on anything else regarding the Cleveland Browns' 2011-2012 schedule here.