Every year as the draft approaches many media outlets either generate or regurgitate content that uses a lot of scouting terminology.

In a short series of posts, I'll explain what some of this terminology means. In this post, I'll cover the "Rush End," the "Power End", and defensive line versatility

Defining a "Rush" end or a "Power" end would be most easily done by diagramming and explaining a very popular defensive front: the 4-3 Under front.

"4-3" refers to having 4 defensive linemen and 3 linebackers, of course, while "under" refers to a shift compared to a "normal 4-3". In an under defense, the line shifts away from the Tight End- or strong-side of the formation, while the linebackers shift to it. 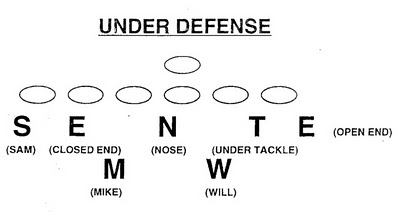 As you can see with the 4-3 Under, both ends are at a 5-technique. The strong side end, or "power end." is lined up to the TE side. This end is usually the bigger and more physical of the two, as he may be seeing blocks from any of the TE, RT, RG, backs, or a combination of two of those players. Pete Carrol describes it better than I could:

The defensive end to the tight end side needs to be a defensive player that can play the run. He does not have to be a big time pass rusher. He has to play the C gap and stop the run.

The "weak side" end or "rush end" ("open end" in the diagram above), however, is the end man on the line of scrimmage. Because he is a blind-side pass rusher against right handed QBs and because of his alignment, this DE needs to be a real athlete (an "ah-thu-leete", if you will):

The open side Defensive End has to be one of your best football players. Size does not matter as much. We want an athletic player who can move around.

For Carroll, this was Clay Matthews; a very good pass rusher who was versatile enough to drop in to coverage on occasion.

For some teams, this strong-side end/weak-side end differentiation will matter a lot. Teams can effectively play a 3-4 that is really a 4-3 Under by turning the weak side end a "hybrid" LB who lines up in a two point stance, with the strong-side end more of a big, physical player. Other teams will use two DEs that are more or less the same (think Indianapolis Colts' Dwight Freeney and Robert Mathis). It's all a matter of what teams want their strengths to be and what fronts they want to use.