SB Nation: Is the 'Stud Back' Dying in the NFL?

Share All sharing options for: SB Nation: Is the 'Stud Back' Dying in the NFL?

Pro Football Focus and Football Outsiders are not the only sites interested in doing some interesting statistical studies related to the NFL. Our very own Jon Bois of SBNation.com has conducted some brief studies in the past, with his most recent one coming the other day. Bois' piece is titled, "Is the 'Stud Back' Dying? A Statistical Study of How the Modern NFL Uses Running Backs."

Make sure you read the entire article and follow the graphs closely. The study was sparked in large part due to how late running back Mark Ingram was selected this year. At No. 28 overall, it was the farthest that the first selected running back had ever fallen in a draft. Sure, you could say that it was a one year anomaly, but the data seems to be leaning toward showing a trend. The source behind this trend could be what we have seen on the field -- less teams are using one pure running back and are instead going with a multi-back system. 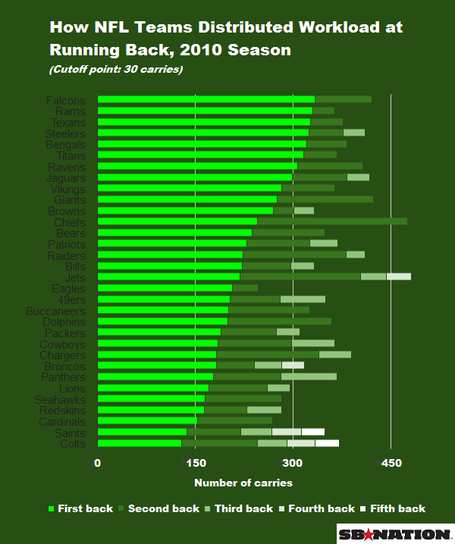 Not only were the Browns one of the teams that had a minimal amount of carries last year, they were also one of the few teams that still implemented a "stud back" mentality with Peyton Hillis receiving a large percentage of team carries. That could very well change this year if Montario Hardesty comes back healthy.

Which system are you in favor of, the stud back system or the multi-back system?