One common misunderstanding about West Coast offenses is that they only throw short or that they utilize the 3-step drop most often in the passing game. In fact, Bill Walsh's bread and butter was 5-step drop, timing-based passes.

The genius of Bill Walsh was that everything he did in the 49ers organization was coordinated and extremely detailed, and it all worked to put the team in the best possible position to win. That theme remains true in the passing game, especially in the 5-step passing game.

Timed patterns coordinate the drops of the Quarterback with his reads, the receivers' routes and the pass protection within the context of the individual play. If done well, these 5-step timing patterns could also be coordinated within the more macro context of playcalling as well.

Walsh saw these advantages as necessary to the success of an offense that wasn't counting on having superior talent to win. When teams are evenly matched or when the defense is slightly better than the offense, receivers can exploit these advantages in order to get open. Timing is essential to accomplishing this.

As Walsh once noted:

Just to "decode" the play a little bit:

"M" = the protection/routes that the backs are running.

The quarterback has a decently complex read on this play, so any information he can obtain before the snap is useful. The earlier the QB can glean information from the defense, the better off he'll be.

Because there are only two kinds of defenses, the quarterback would look for a safety in the middle of the field on the first step of his drop. 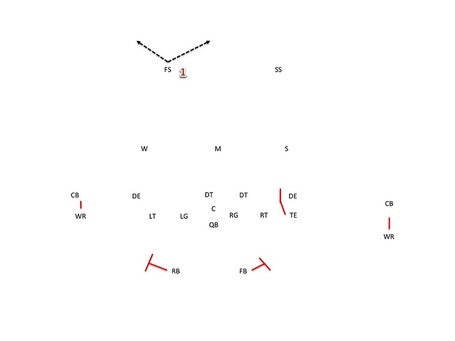 If the safety is straight back or to the strong side, the QB is going weak. If he's staying weak, the QB goes strong. If it's a MOFO coverage (FS weak), the quarterback is probably looking at Cover 2 man under or Cover 2 zone.

The CBs are important to the read pre-snap, because if they press, the WRs will convert their routes to fades:

When the CBs press like this, it's usually Cover 2 zone. Against Cover 2, the play would look like this: 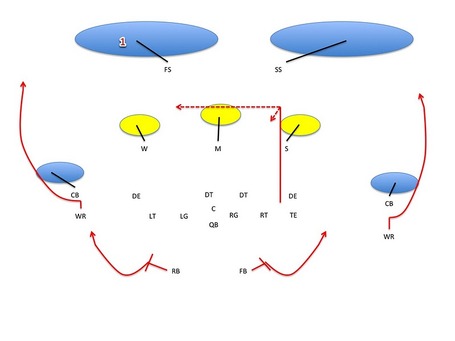 With the Free Safety dropping weak and the CBs pressing, the QB will go strong, looking first at the tight end. In Walsh's version of the play, the TE is looking to sit between the SAM and the MIKE. The SAM could potentially leave to try to defend the fade or the FB, as pictured below. If the SAM and MIKE don't squeeze the TE, he's getting the ball. 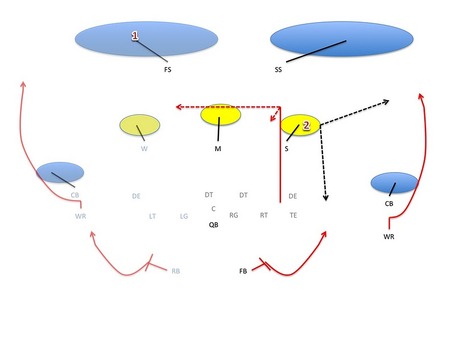 If the SAM does squeeze the TE, the Quarterback eyes the CB. If he drops to cover the fade, the QB dumps it off to the back. If the CB comes up to cover the flat, the QB will try to drop the ball to the WR in front of the safety. 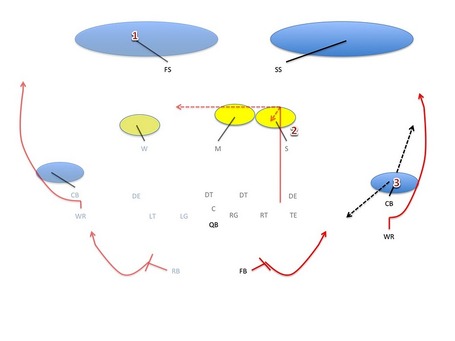 Against Cover 2 man under, the only chance this play has is to the TE. He will attempt to get inside the SAM on the stem of the route and run an in at 15 yards. If that isn't open, the FB might out-flank the MIKE as he comes down to cover him. If the MIKE and SAM both drop to cover the TE (or make a late switch), the FB is open underneath. 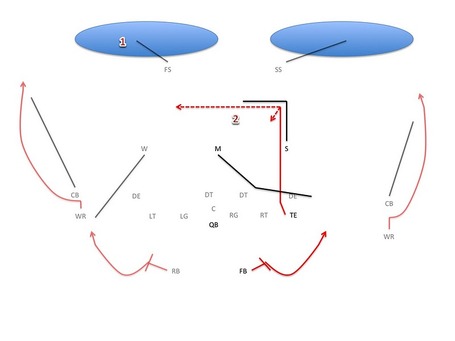 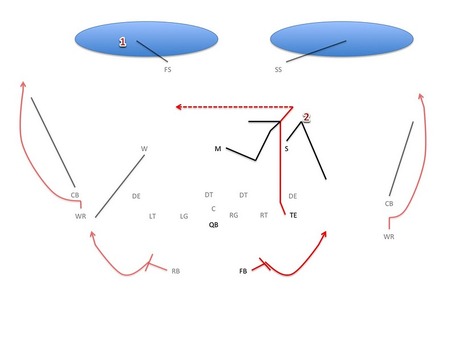 Against Cover 3, this play is easy. With the FS dropping straight back, the QB will work weak. The CB responsible for a deep zone should be easy for the WR to beat on the out, so the QB will look for the "SCIF" or seam/curl/flat player.

If he's not in the throwing lane of the WR, the QB throws the out. 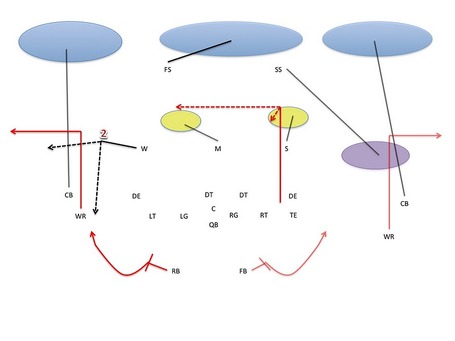 If the SCIF player is in the throwing lane to the WR, he can't guard the HB. The QB will throw the ball to the HB one foot in front of his numbers so he'll be catching the ball in space running full speed toward the line of scrimmage.

Against Cover 1 man, the FS is again dropping straight back so the QB is going to the weak side WR. The WR there is essentially one-on-one with the CB and should be open. If he isn't, the read could be taught a couple of different ways. One way is to go to the M route by the HB on the same side as the receiver, then to the other. 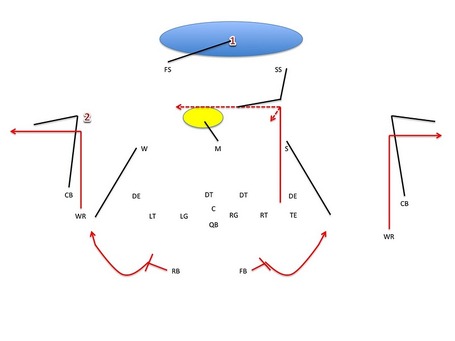 Timing: making use of offensive suddenness

The Quarterback must make the read of the FS and then whichever other progression above by the time he hits the fifth step in his drop. That's the level of complexity and detail Bill Walsh incorporated into his offense. One-two-three-four-five and the ball needs to be out.

The WRs run a speed out at precisely 12 yards deep (a "speed" out is rounded, not square). The WR takes seven steps in his route to get that deep, and the ball is thrown before the WR can see it leave the QB's hand. The QB's drop should take under 1.2 seconds, and the ball should be out in under 1.8 seconds.

The QB should try to throw "through the earhole" of the WR to ensure a completion, to place the ball where the WR can naturally catch it and turn upfield, to put the trajectory of the ball higher to avoid underneath defenders, and to put the ball at eye-level so the WR can turn and find it easily.

When thrown correctly, the WR makes a break and catches the ball before the CB can break on it. This gives him a chance to make some YAC, and timing this route with the QB's drop means the risk of a sack is minimized. This fully utilizes the receiver's advantage of knowing when he will make his move.

Cohesiveness: making use of offensive possibility

In order to maximize the receivers advantage of knowing where he will go, the offense needs to present a number of viable threats off of the same look so that the defense must respect many different route options and cannot begin to jump routes. If the defense jumps routes anyway, the offense must capitalize.

The following are some plays what would all look the same to the defense at first, but present differences later. 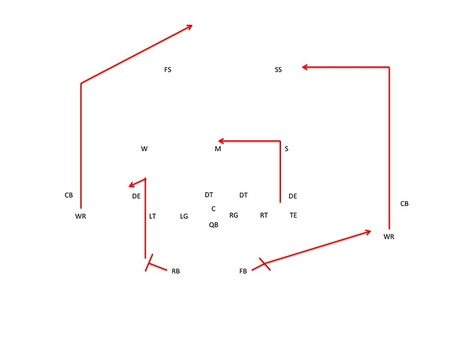 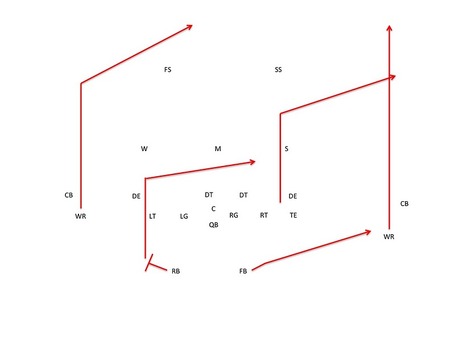 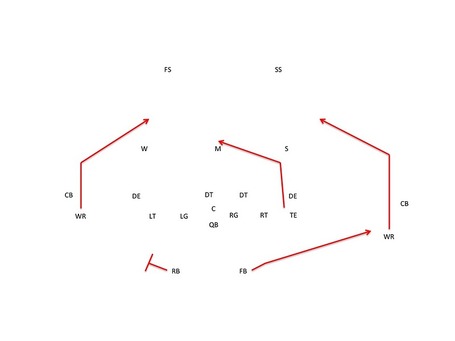 ...you get the idea. You can draw up just about anything from the initial stems of this play. A cohesive offense will have other looks set up off of this specific play. For example, you might know how the opposing team schemes it's run fits and be able to run a draw off of this split flow action by the backs. Any team running this play would almost definitely include a version of an Out-n-up route: 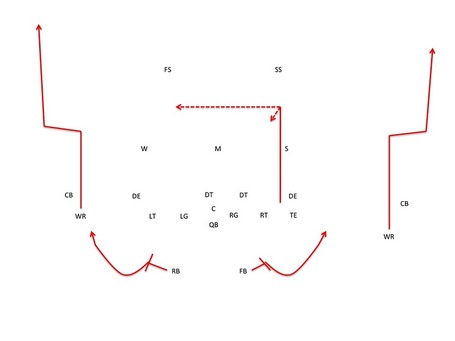 If you can effectively run different plays from these stems, defenses will not be able to afford to guess which of the plays the offense is running on this down. The offense will have retained the advantage of knowing where it's receivers will go.

Walsh wanted to eliminate the QB standing in the pocket with nowhere to throw, and he wanted to eliminate receivers getting open only for corners to recover within seconds, preventing completions. He accomplished this by coordinating the receivers' breaks with the QB's drop and reads, as well as the protection for the play (more on protection later). This created a coordinated, cohesive set of plays as the bread and butter of "The" West Coast offense.