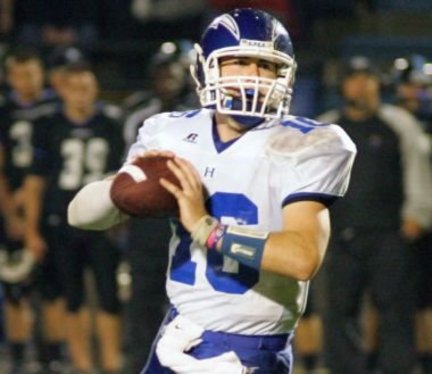 Over the next couple of days, I'm going to be busy doing some brief summaries on the undrafted free agent players who the Cleveland Browns have added to their roster. I'll try to go in order of positions (i.e. offense first, defense second), but adjustments will be made based on additional signings.

Today, we begin with quarterback Troy Weatherhead (6-3, 218 lbs) of Hillsdale College. This past season, Weatherhead completed 76.8% of his passes for 3,215 yards, 26 touchdowns, and 6 interceptions. It would be a mistake to say Weather was a mobile quarterback in college, as he finished the year with very few runs.

Some of you might be familiar with Weatherhead if you are fans of the Cleveland Gladiators (Arena Football League). He was signed as their backup quarterback on June 29, 2011 and received an opportunity to play last week. With the Gladiators already having clinched a playoff berth, Weatherhead played in the second half of the game and tossed four touchdowns.

Weatherhead was named the player of the year in his division, and no doubt his accuracy makes him a good candidate to be a developmental quarterback in the West Coast Offense to compete with Jarrett Brown for the team's third quarterback role. He directed a pro-style offense as Hillsdale, and previous scouting reports stated that he needed to improve his quickness and his arm strength. Chances are, someone from the Browns scouted Weatherhead at his Pro Day, unless we were the only team who didn't attend:

A defining day for Weatherhead came last month at Michigan State’s pro day. Throwing in front of 31 of 32 NFL teams, Weatherhead estimated he completed somewhere around 52 or 55 of his 60 passing attempts. (Source)

Weatherhead was ranked as the 41st best quarterback in the draft. There's really not much to go on, but you can see two throws from his Gladiators game last week in this video. He is No. 15, and appears at the 4:20 mark.