Share All sharing options for: The St. Louis Rams 2010 Offense and What to Expect from Cleveland in 2011

Throughout the offseason I have been studying the St. Louis Rams' offense from the 2010 season. There are many similarities between what we think we will have headed into next season and the squad that the Rams put together last year. They started an inexperienced, accurate, mobile QB, a physical Pro Bowl caliber running back, and not a whole lot to speak of at wide receiver. Combine those similarities with the fact that Pat Shurmur will have been in charge of both playbooks, and I think we'll see a lot of similarities between the offenses.

Simply put, the Rams were a zone blocking team. They didn't systemically draft lighter, quicker OL like the Indianapolis Colts or Mike Shanahan's Broncos, but an extremely high percentage of their runs were either the inside zone play, the outside zone ("stretch") play, or much less often the pin and pull outside zone play.

One big wrinkle that the Rams utilized was the addition of a 1-step pass option to the running game.  This run/pass option is often misunderstood by fans and commentators.

On any of these run/pass option plays, the wide receivers will anticipate a pass and run a given route. The line, backs, and TEs will run the play as though the run were going to occur. Neither of these groups makes a read, they simply carry out their branch of the play as though both the run and the pass were happening simultaneously.

The QB will make a pre-snap read based on the defensive players defending the wideouts. He will basically decide to go with the run play or the pass based on what the defense was doing.

The Rams ran two versions of this run/pass option: Z look/Z stay and the bubble screen.

X or Z look ("X" or "Z" refer to the WRs; the X receiver is to the left of the offense's formation, the Z receiver to the right) is a one step slant. If the CB is both off and outside of the WR, this is what the offense would run.

X or Z stay refers to the WR taking one step and then stopping and getting the ball. If the CB is playing off but inside the receiver, the offense would do this instead.

The QB's read is very simple: is there anyone within 5-8 yards of the wideout? If not, he will receive the snap, take one step, and fire the ball out to the appropriate spot. If the CB was rolled up, the QB hands the ball off.

Below, Redskins CB Donte Hall is playing off of WR Mark Clayton before the snap. QB Sam Bradford takes the snap and pulls the plug on the running play buy firing it out to Clayton (Z stay): 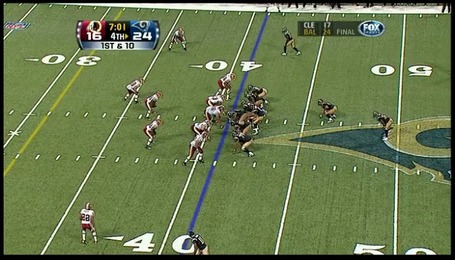 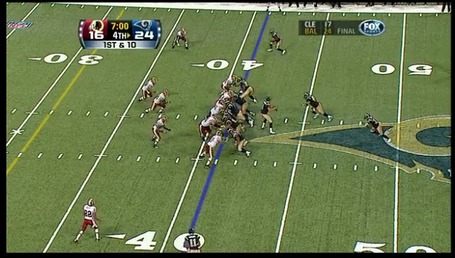 One of the best things about these plays is that you get athletes in space with the ball. You put the onus on the defense to tackle you--and to make their DBs tackle.  If your players make one guy miss... 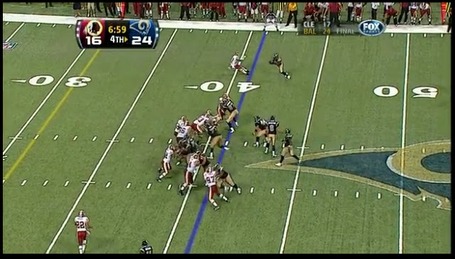 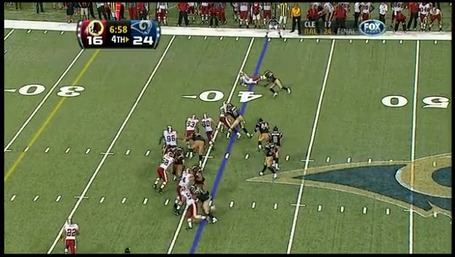 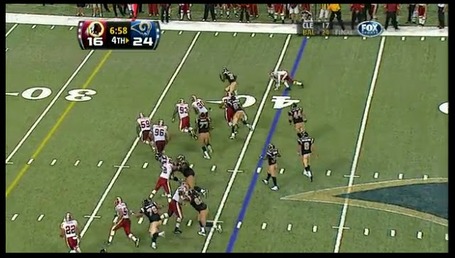 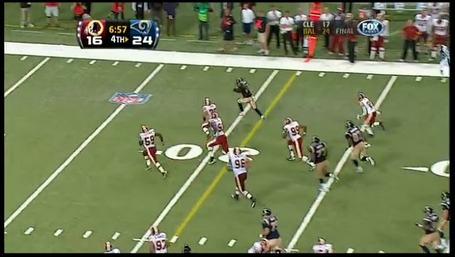 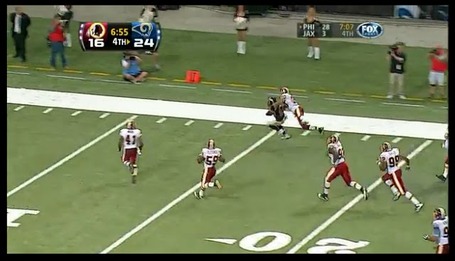 We've all seen flash screens to the outside, and no matter how much they make Jon Gruden fall asleep in the film room, they still work ("You have to get the defense adjust somehow, and if they are going to cheat...there it is, get the guy out of the box"). The Rams used the bubble screen in lieu of X look/X stay when they had two receivers split out of the formation to the same side.

This read is also simple for the QB: are there two defenders in position to guard the two wide receivers? If not he will gun it out there because one guy can't guard two receivers. If a defender is walked out on the WR, he has taken himself out of the run play and the offense has a blocker for every defender.

In this first play the Redskins have one corner guarding each WR to the right of the formation. You can see the bubble option develop, but Bradford makes the correct read and hands the ball off: 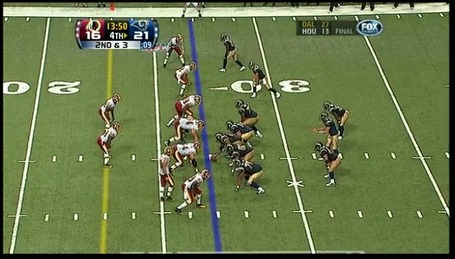 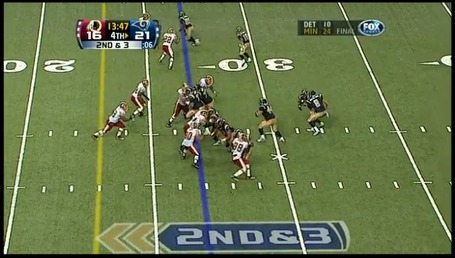 Note the hole between Brian Orakpo (#98) and LaRon Landry (#30). RB Kenneth Darby probably has a first down if he runs the zone play correctly (pressing his landmark horizontally and looking to make one cut upfield). 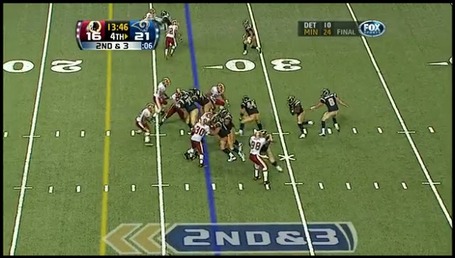 Instead he heads downhill too quickly (impatience) and tries to bounce the run back outside. This slows him down, and he only gains a few yards. 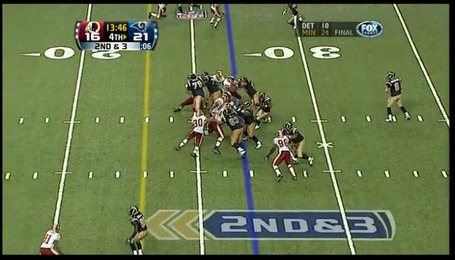 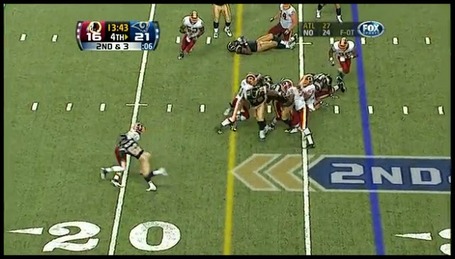 In the next example, the Redskins do not walk a second player out on the WRs to the right. Again making the correct read, Bradford takes the snap and fires the ball out to WR Danny Amendola in the flat. 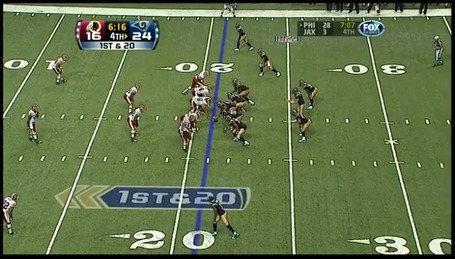 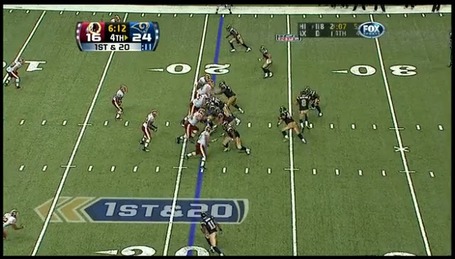 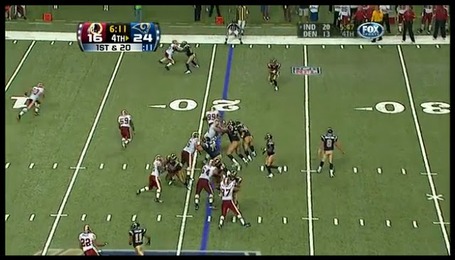 Amendola catches the ball with no defender within 10 yards of him. He doesn't get his until he has gained 5 yards and ends up making 8 yards on the play. 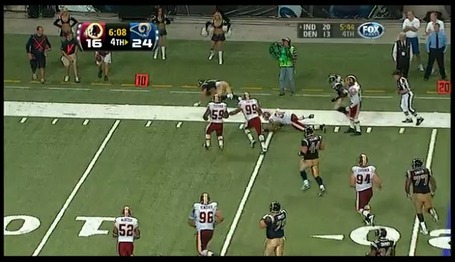 A large portion of the 2010 Rams' play passes were play action passes in which they would fake a zone run one way and roll Sam Bradford out the other.

The Rams' most common play action pass involved a three-level vertical stretch. The outside WR would run either a go/fade or a deep comeback. That route would be combined with a crossing route from the opposite side of the formation or an out from the same side of the formation (the crossing route in this case). The last route would be into the flat and came from several different places. 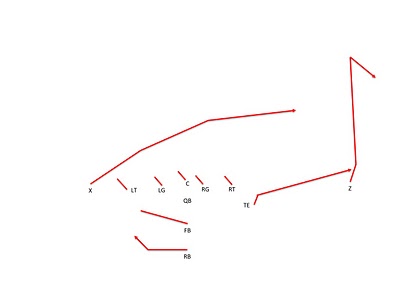 Here, Bradford fakes the outside zone play to the left. Notice how the back flow (both to the left) and the pass protection (zone-left) mimic the run play exactly. 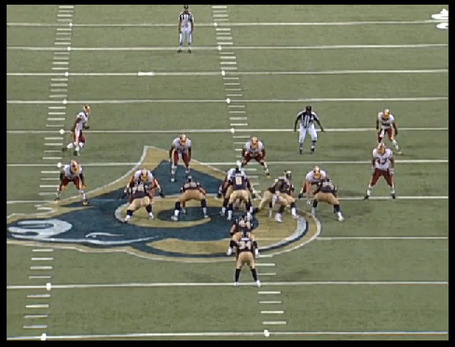 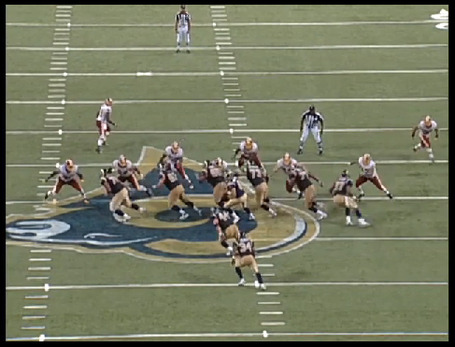 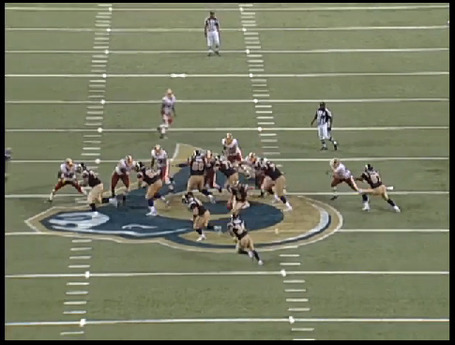 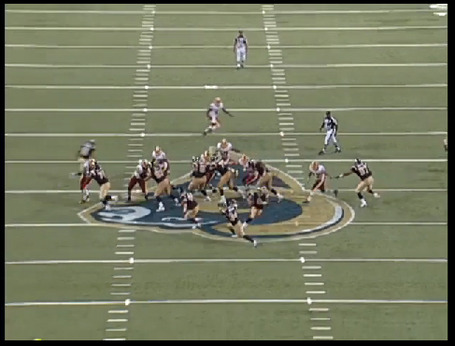 Bradford rolls out to find the crossing route and the TE in the flat covered... 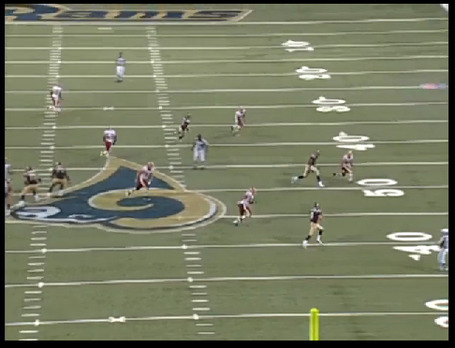 ...but the WR is one on one and breaks open on the comeback. 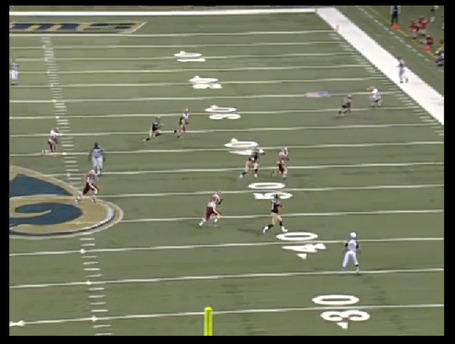 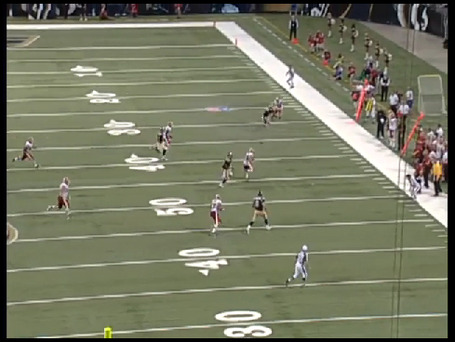 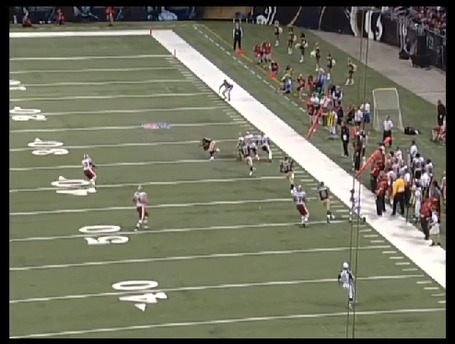 By using the play pass and adding a 1-step pass option to base runs, the Rams were able to achieve a balanced offense in the most meaningful sense of the word. Even though they only really ran two concepts in their running game (inside and outside zone) they were able to keep the defense on it's heels.

Up next: The Passing Game