I was live in Berea for my final training camp session of the year, and it might be safe to say that Monday morning was the coldest practice of the season (below 70 degrees). When I arrived in the morning, I was surprised to see the camera lifts surrounding the field that was closest to the fans, near the seating area that I knew would be in the shade the entire session. I scored "front row bleacher seats" since I arrived early, although it was definitely a lighter crowd today than any of the other sessions I had been to. Let's get to the review of what went on. I'm sure you're tired of hearing about injuries, so I will end the report with injury notes, rather than begin with them. 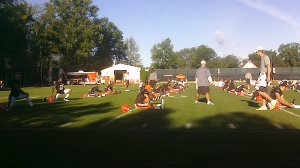 The players stretch before practice begins. You can see where I was sitting and how the shade covered us pretty much the entire practice session. 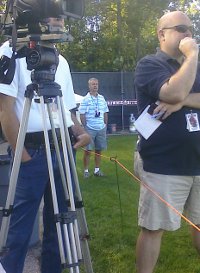 It's Tony Grossi! I wanted to chat it up with him, but ended up chickening out.