If you're wondering why there was not a "Day 5" training camp report, I am counting the off day Wednesday as the fifth day of training camp. The team did accomplish some necessary things Wednesday too -- they held tryouts and signed a new punter, and they got first-round pick Phil Taylor up to speed on some things.

Since Thursday's session was moved to 4:10 PM, I was able to head out to Berea to witness the action in person. After the jump are my news and notes from the day, along with some of what the local media had to add. 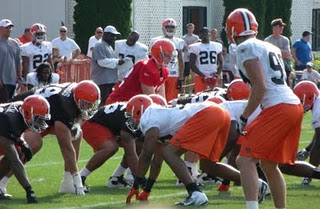 Colt McCoy and the offense get ready to run a play, but the session was not done in full pads. (photo credit: National Football Authority, Daniel Wolf) 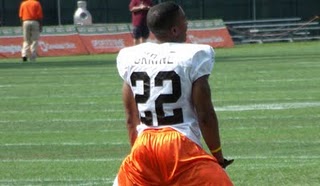