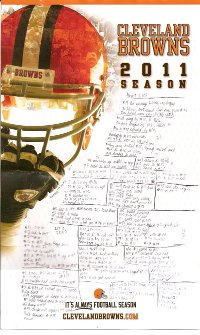 I had brought a pen and little notepad to take notes in for yesterday's session, but when I was handed the training camp roster sheet (the reverse side of the image to the right), I noticed that the other side had a lot of white space on it. Considering I would already be flipping to this sheet to check out jersey numbers, I decided to use the promotional flier as my place to take notes. They might not mean much to you, but if you click on the image, it will take you to a bigger one where some of my writing is legible.

I was surprised by the lack of fans that showed up. For one, while the sun was still making people feel hot, the temperature seemed a lot cooler than it had been the previous two years. If I recall correctly, the attendance last year was somewhere around 22,000. I saw way too many open seats this year, and I wasn't surprised at the conclusion of the event when the announcement was made that attendance had reached 11,965. It's still more fans than you'll ever see in Berea. I'll just throw the "lockout" excuse out there as the reason for the lower attendance.

You can probably tell from last night's play-by-play script who my favorite player to watch was on offense: tight end Evan Moore. This guy already has the most highlight reel plays in training camp, and he's only been participating since Thursday. He's making the same type of plays he did last year in his limited playing time: he is a big target who seems to be a mismatch against anyone he goes up against. He combines decent speed with an uncanny ability to shield the defenders away from the ball, and both Colt McCoy and Seneca Wallace seem to have great chemistry with him. I know we have Ben Watson and Jordan Cameron on the team, but given our receiver situation, I'd really like to see Moore on the field more times than not.

This was really the first time I thought the chemistry was a little off between McCoy and Brian Robiskie. I don't blame Robiskie, because besides some of the red zone drills, it wasn't the best session for McCoy. I think part of the reason we saw McCoy look bad during the two-minute drills was that he didn't have Peyton Hillis at his disposal. You can't run the ball in that situation, and when Hillis had previously been in on McCoy's series, he either commanded attention or made a nice play after the catch. It's all about McCoy being comfortable -- knowing in the back of his mind that he has a guy out there he is confident in. It was a little discouraging to see that he had troubles against the second-team defense too.

Back to Robiskie, I thought he got enough separation on a few plays. On the first deep ball attempt that went his way, I saw Sheldon Brown catching up because Robiskie was waiting for the ball a little bit. On the second deep ball attempt, there was safety help the entire time from Eric Hagg -- again, that's on McCoy, not Robiskie. On a key third down play that was deflected by Ramzee Robinson, Robiskie should have been led to the sideline a little more. Instead, the throw came where Robiskie was stationary, allowing Robinson to deflect it away.

Although I didn't see him much, this was the best of three times I've seen Greg Little. He had good concentration on his touchdown catch in the end zone between two defenders. Joshua Cribbs does a good job getting open over the middle, catching the ball, and then immediately taking it upfield for additional yards. I know this is no contact, but Cribbs looks 100 times quicker than he was all of last season when he was plagued by a toe injury.

I've stated this in the past -- it's always tough to see what both the offense and the defense are doing, so most of my attention is on the offense. I did try to pay attention to defense a little more, particularly defensive end Jayme Mitchell. With Jabaal Sheard stonewalled by Joe Thomas, Mitchell has looked like the best pass rusher on the team, something Tom Heckert told fans all offseason. There were several times the quarterbacks would come off of a playaction and see Mitchell forcing their hand at making a play. I wondered several times, "if contact was allowed, would Mitchell be going harder and get to the quarterback?" We'll see this Saturday against the Green Bay Packers.

When it came to the defensive backs, I wanted to see how well Dimitri Patterson did. I don't see him standing out as a glaring weakness, although we didn't know that about Eric Wright last season until Anquan Boldin kept smoking him during the regular season. Safety Eric Hagg did a good job in coverage twice against McCoy. Usama Young should have had a pick six, and Mike Adams did have a pick six, both off deflected passes by McCoy. It is good to see our safeties around the ball so often.

Brownies: On a special teams drill, I saw the 6'5" Chris Matthews run down to be met by the 5'10" Ray Ventrone.....Ventrone was able to handle him, but the size comparison made it an interesting matchup.....on kickoff practice, only half of the gunners would run down, meaning the kick returner would "appear" to get a touchdown every time.....it was annoying to hear kids around me saying, "man, that would've been a touchdown!" when half the coverage unit didn't run down on purpose.....safety T.J. Ward lowered his shoulder a little into tight end Ben Watson during a 7-on-7 drill, perhaps itching for contact.....rookie undrafted free agent guard Dominic Alford seemed to be having some issues during one-on-one drills.....pre-practice, the first three players on the field were quarterbacks Troy Weatherhead and Jarrett Brown, and punter Richmond McGee.....Weatherhead did not get any reps during the session, and I think Brown is locked up as the third quarterback.

The Browns' next practice is Monday afternoon (not morning). I might be there in attendance again, but I'm not certain.