Check out part one and part two of this series.

The season is upon us and I am sick of looking at Sam Bradford in this offense instead of Colt McCoy in Orange and Brown. Needless to say, I'm looking forward to continuing this series for the Browns in the near future.

These concepts aren't constraint plays and are not as cohesively grouped as the running game and 1-step quicks are, or the shallow series and screens with inside motion by a WR: I just needed another post to split the passing game up a little.

Smash is a hi-low off of the CB/sideline defender. Typically, a WR runs a short curl that converts to an in against man. He is going to run up the field to around 6 yards and turn in, and then "just get open".

The inside receiver will run a corner route. Against man, he'll lean on his man and then break hard to the corner at 12 yards, against someone in a deep zone, the route will look a little more like a "post-corner" with him faking inside then breaking out. With no one over the top, he'll roll his route as to not lose any speed.

Last year the Rams liked to run this concept from a variety of different formations, as well as a variation of the concept from a tight or bunch formation. This variation used a shoot route into the flat as opposed to a mini curl but still created the vertical stretch down the sideline: 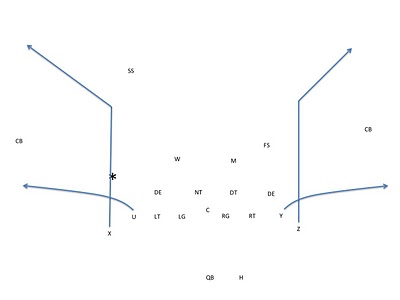 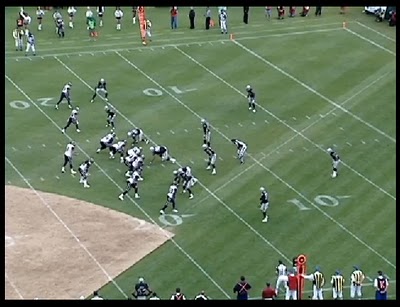 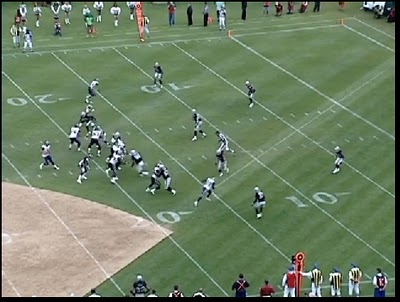 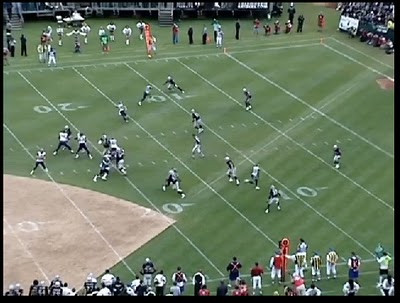 At this point you can clearly see the two-deep zone structure.WR Mark Clayton is running the "post-corner" version of this route, looking over his inside shoulder here first. The safety over top of him has to be ready to cover a post into the middle of the field. 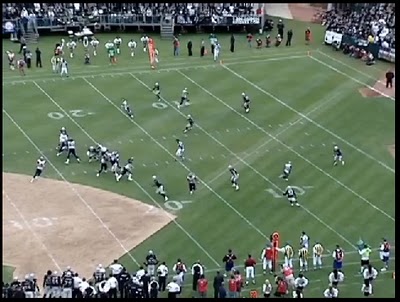 Watch the CB toward the bottom of the screen as he is torn between the shallow route and the corner. 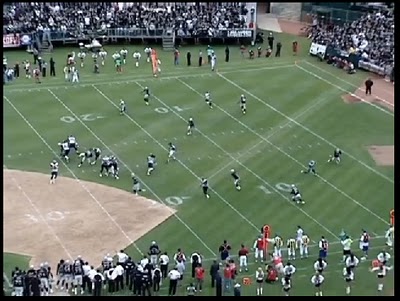 The CB pulls up and Bradford throws the corner route. 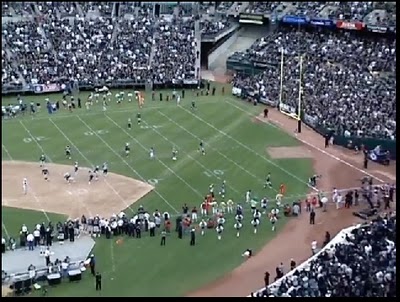 Earlier I mentioned that one reason we like to cheat our WRs in to the formation in tight or bunch sets was to send them on crossing routes across the formation. So that teams cannot see a WR close to the formation and immediately know we will have a crossing route, we also used these formations to clear space wide near the sideline, making CBs and flat players cover a lot of ground. This corner/flat combo was one way of attacking that area of the field. St. Louis loved this concept down in the red zone. 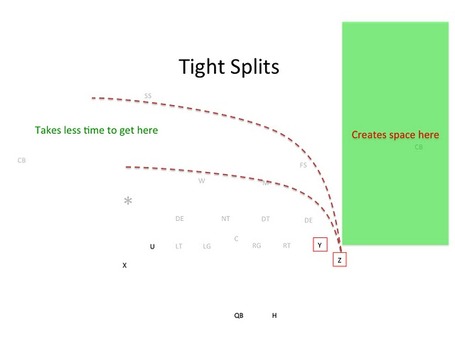 This play uses the same corner/flat combination as the Smash concept. Only Snag integrates with our shallow series: a WR looks like he is going to run a shallow cross, only he either stops or pivots back outside depending on the coverage. 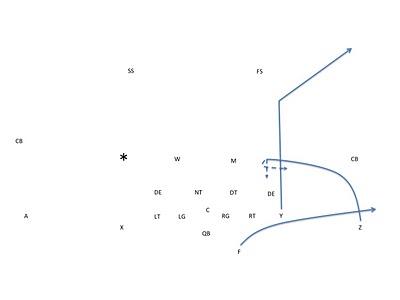 This "stick route" takes the vertical stretch of the Smash concept and turns it into a triangle stretch; it puts both a sideline defender (CB) and the flat defender in conflict. This "triangle stretch" is great for attacking most coverages, as it will be effective both against Cover 2 and Cover 3 families of zone as well as against man. 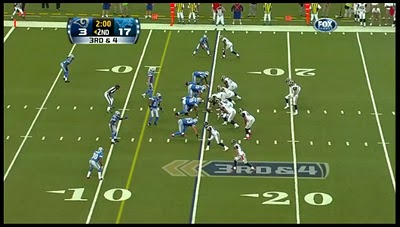 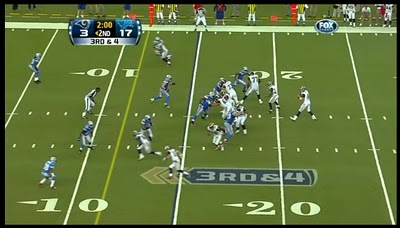 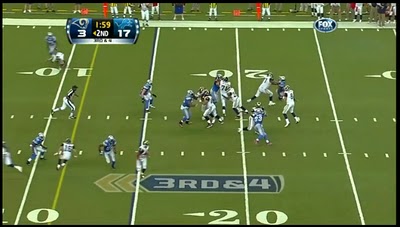 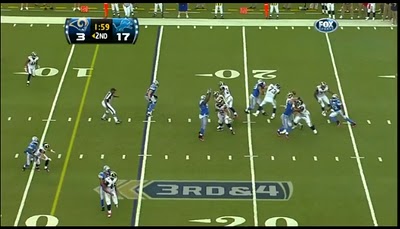 Though Detroit is playing tight man coverage, the CB can only be on one side of WR Danny Amendola, who is running the stick route. Bradford decides to "throw him open", putting the ball away from the leverage of the defender. 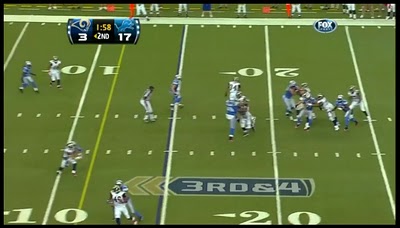 This type of throw could result in a phenomenal play by the DB. But because of Bradford's deadly accuracy, a completion or a pass interference call is much more likely because the CB will have to go through the receiver to get at a perfectly thrown ball. 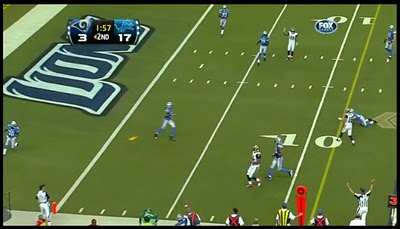 Amendola gets mugged and draws the flag.

There is more than one way to create a triangle stretch, of course. The Stick concept is essentially the same play as Snag, only it is created in a different way.

Instead of running the outside WR in, he clears out deep. The QB will usually not throw him the ball. Why have him clear out? Clearing the WR out usually takes the defense's best coverage defender with him. That leaves the weaker pass defenders (nickel backs, LBs, safeties) to cover the main portion of the Stick concept.

There will be one receiver that shoots immediately into the flat to pull the flat defender out there with him. If no one goes into the flat with him, the QB gets him the ball quickly and in a place where he can catch the ball and run for YAC.

The final receiver will run up the field to about 5 yards, and then he has a number of options. Against zone, he will turn away from the defender moving to him and settle in the hole, looking for the ball immediately. Against man, he will break hard away from his man and run toward the sideline. 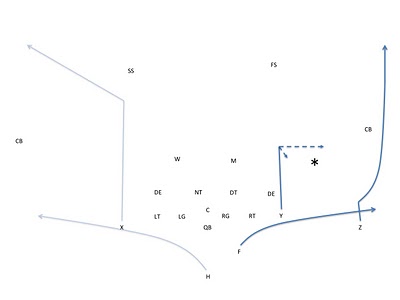 The real key to this play is having a QB who can fit the ball in to a tight window accurately enough so that the receiver can not only catch the ball, but also make a few YAC. The QB will look to put the ball on the side of the receiver's body that is away from the "danger player" coming to make the tackle so that the receiver is already turning as he catches the ball.

Does that sound like something that should be familiar to Colt McCoy? It should. This play is run by every team in the NFL, and many college teams--and we've already seen it from the Browns in the preseason. Texas Longhorns fans, this concept has been the bread and butter of your team since Mack Brown arrived in Austin (they call it the "two-man game"). McCoy, Young, and every Texas starting QB have been asked to master the concept.

Here's some vintage images of McCoy and the "Two man game": 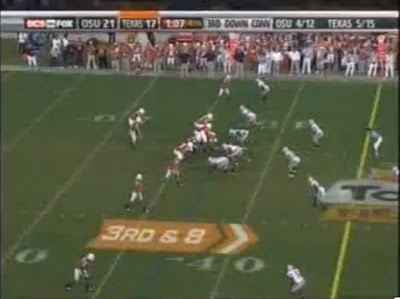 A very flexible concept, Texas is running their "two-man game" from a WR trips set. The inside man will run into the flat, while the middle receiver runs the "Stick" route. The widest receiver clears. 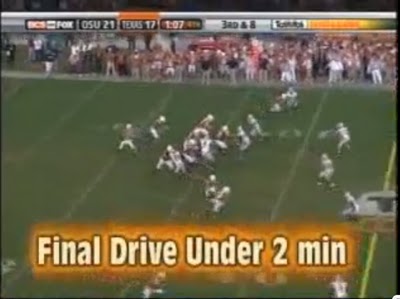 Please excuse the graphic. You can see the route stems above, while below you can see the "Stick" receiver coming to a stop and settling in the hole between OSU's zone defenders (just moving off of the screen to the right). 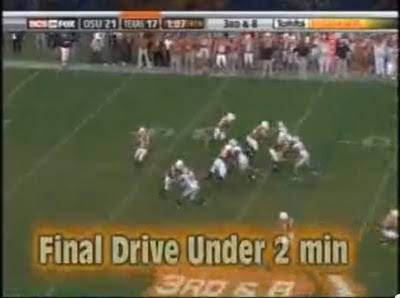 Not only is McCoy able to drill the ball between two defenders pinching the stick route, his ball placement and timing allow for 5+ YAC. 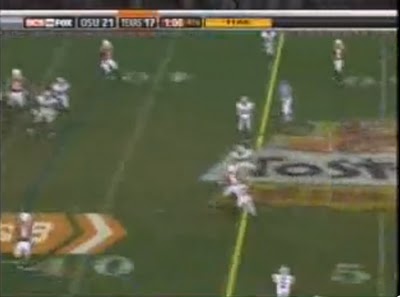 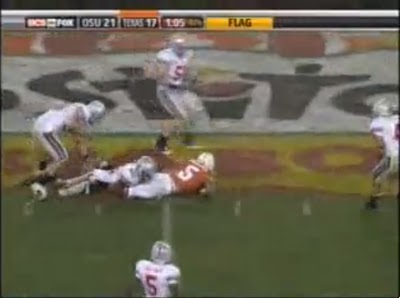 This concept is exactly what it sounds like. An outside receiver will run a fade/go, and the slot receiver will run an out. He'll round the route if he isn't being covered too tightly in order to not lose speed. St. Louis ran this concept over and over, often in key third-and-medium situations. WR Danny Amendola was usually the target, as he is a tough, shifty matchup who can gain YAC when he gets the ball in space. While extremely simple, this concept worked surprisingly well for St. Louis last year, being particularly good against man-blitz, any "off" coverage, cover-2 zone and quarters. 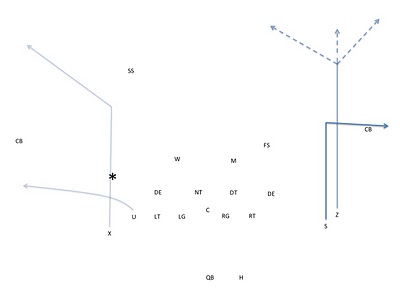 Here, Amendola is to the top of the screen. St. Louis moves the pocket, isolates one defender, and Amendola does the rest. 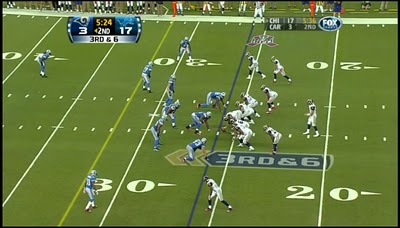 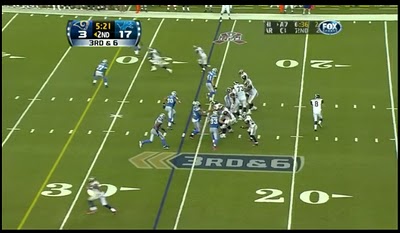 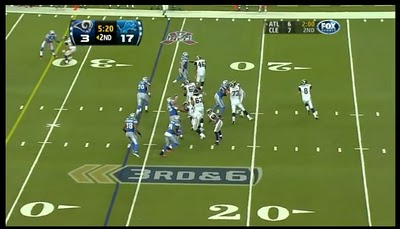 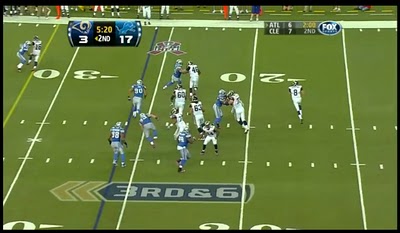 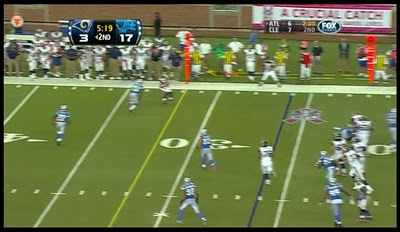 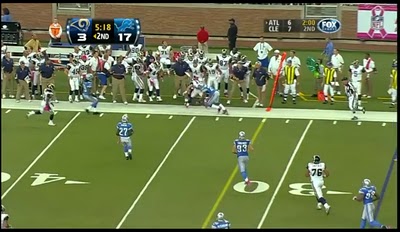