I believe this is what they call a "dagger."

Down three points late in the fourth quarter, the Cleveland Browns had to stop the Cincinnati Bengals from converting a 3rd and 3 and running out the clock. Cincinnati stacked the box, leaving only one WR on the field in favor of "22" (2 backs, 2 tight ends) personnel. Cleveland countered by bringing an 8th man (Joe Haden) into the box, but 8 weren't enough.

DE Jayme Mitchell, who was lined up at LDE crashed down the line as RB Cedric Benson ran around him outside for a touchdown. When I watched this play live, I was furious at the undisciplined play and youthful mistakes of Mitchell and our line. Ready for five (four?) words you won't hear very often from me?

I was flat-out wrong.

After reviewing the play, I believe the mistake was a structural one, not one made by any individual Brown.

The Bengals lined both TEs up on the offense's right side, with the backs in an I formation. The Browns countered with their normal 4-3 personnel, in what appeared to be an adjusted 4-3 Over front (DL in same alignment as 4-3 Over, LBs are not). The Browns were in a single-high coverage, run blitzing WLB Chris Gocong at the snap: 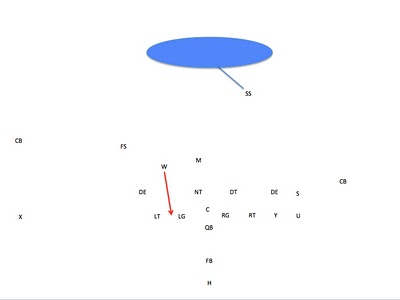 The Bengals were running the Power play, a simple running play that every pro team uses. It involves pulling the backside OG while the rest of the line blocks down, and a Fullback leads: 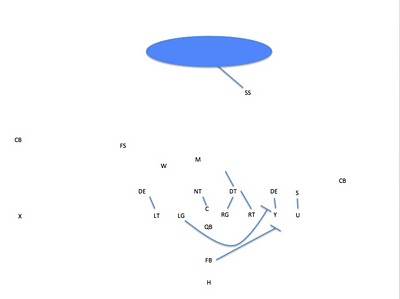 The 4-3 is predicated on each defender controlling a gap between linemen to stop the run. You need one player for each gap that the offense presents to you.

As you can see from this endzone angle, the Browns have all the gaps on the line of scrimmage covered. From (viewer's) left to right, you'll see DE Jabaal Sheard with C gap responsibility, Gocong blitzing through the B gap, and Athyba Rubin with weakside A gap responsibility.

Next to them, DT Phil Taylor stunts into the strong-side A gap. I am unsure if this was supposed to happen or if it was the result of Cincy running that way all game and Phil looking to make a play. In any event, D'Qwell Jackson is able to flow over the top of him to get in the B gap to that side (these arrows show a "switch").

Next in line is Jayme Mitchell. You can see that he is lined up in a 6 technique (directly over the TE) and he has the strong side C gap. LB Scott Fujita is over the outside TE and he has D gap responsibility. Joe Haden is the only person left to be the contain player: 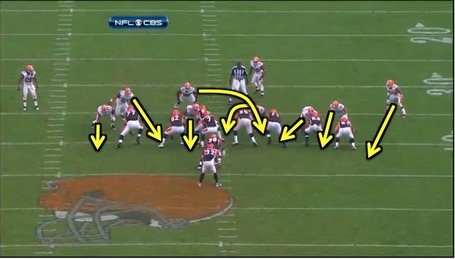 As it was presented, we had all the gaps covered. But there was one problem: the Fullback. While Joe Haden had a great game, we can't expect him to stack a fullback and make a play on either side of him. Because Cincinnati's FB was able to kick Haden out, they created an extra gap: 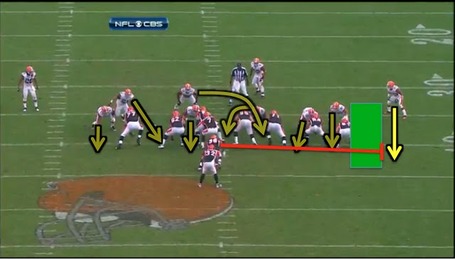 The only person that is anywhere close to being able to fill that gap is safety TJ Ward. 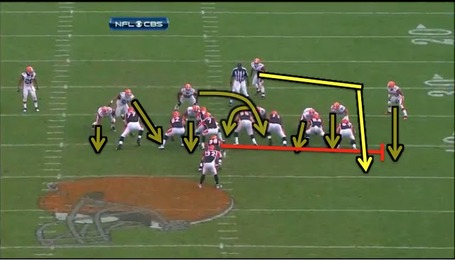 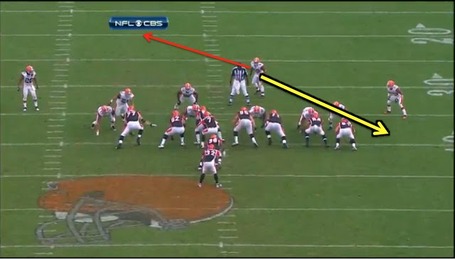 Further confusing to me was the alignment of FS Usama Young. Because Sheard already had the outside gap responsibility on that side of the formation, I don't know what Young was defending out there. 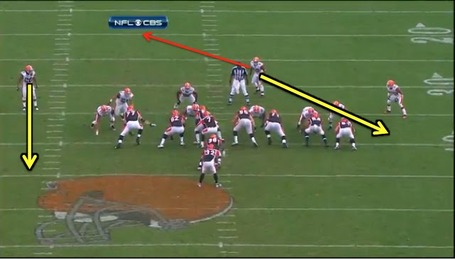 An easy adjustment might have been to screw Ward down into the box to help with the run while Young took the deep 1/3. This would leave Sheard responsible for stringing any run to the Bengals' left out wide, and allowing defensive pursuit to catch up. 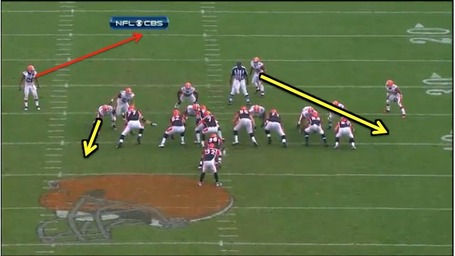 You can see right off the snap that Rubin and Gocong are left defending the same gap as the Guard (#62) pulls. You can see Sheard furthest left on the line, then LT Andrew Whitworth, then both Rubin and Gocong. Further right, Andre Smith (#71) is able to get immediately up to the second level, leaving a lot of space in his wake. 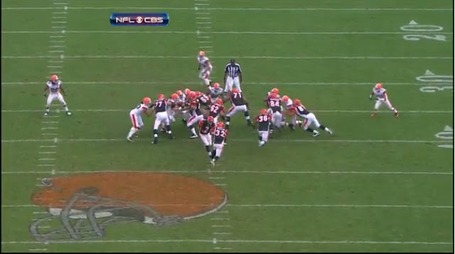 Because of Taylor's stunt and Smith's immediate release to the second level, that C gap got awfully big. There is a lot of space in there that Mitchell was responsible for. He worked hard to shut his gap down, with Fujita following suit. This is what I mistook for over-aggressive play. 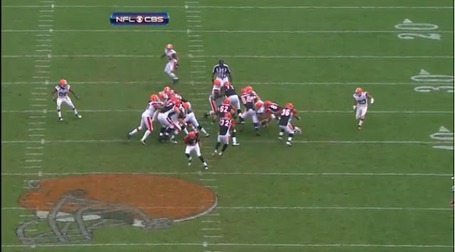 Above, the C Gap quickly closes because of Mitchell and Fujita, but more space opens up outside. Obviously it would be better for Fujita to stay on his feet there, but even if he is able to he'd have to cover two gaps and still be able to tackle Benson within 3 yards of the line to make this play. As I said earlier, we simply don't have the numbers at the point of attack to be able to properly defend this play. The run is going through a gap that is unaccounted for. 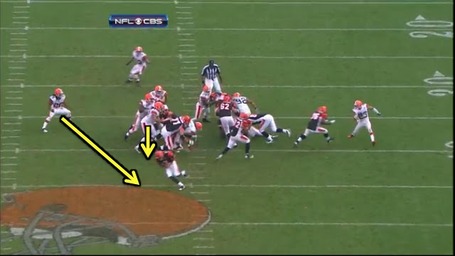 Here, you can see Sheard (with the help of Gocong's run blitz) able to hold his edge, while Young is out wide and not really able to provide support against this run. Unless we are worried about Gradcowski running a naked bootleg here, I don't know what we were doing. 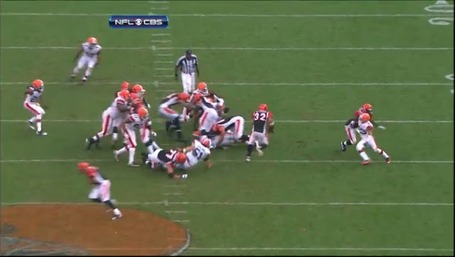 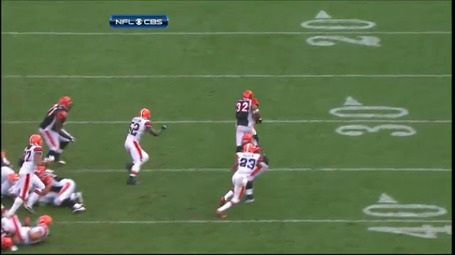 Benson is off to the races, and we all know how it ends. I'll spare you having to look at him in the endzone again.

I see no individual defensive player as being at fault here (though it is possible that someone completely blew their assignment). Rather, I see this as another example of our lack of team coordination and cohesiveness: our defense was simply structurally unsound against the run.