I've updated the spreadsheet and per a suggestion by scrumm I have begun separating things into further columns.

Shurmur's trend of running the same or countering plays back to back continued--including three different inside zone plays on our last three offensive plays of the game.

Another place where we saw the back-to-back tendency was in an area of our offense that we put in specifically for teams like the Colts:

While many commenters on DBN seemed upset at our screen game, I enjoyed seeing it as a counter to a Colts' defense that emphasizes speed and athleticism. Shurmur knew he would have to slow down the Colts LDEs, and we attacked by using draws and screens.

By my count, we ran six screens with two of them going for little to no yardage. I graded a third screen as not successful because it only gained 4 yards on 2nd and 15.

One of the screens to Josh Cribbs happened to be one of our biggest offensive plays of the game and it also happened to be a part of Shurmur's back to back tendency:

Trailing 7-9 late in the 2nd quarter, we faced a 2nd and 10 from our own 32 yard line. Our offense came out in a 2x2 receiver formation with TEs Alex Smith and Ben Watson split wide, and WRs Greg Little and Josh Cribbs in the slot. 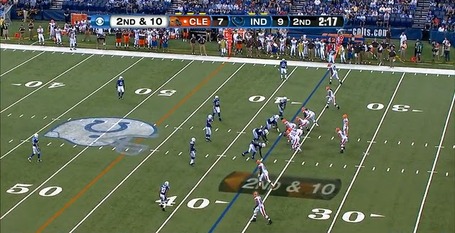 We brought Cribbs in motion to the left, which revealed the Colts were in zone coverage. 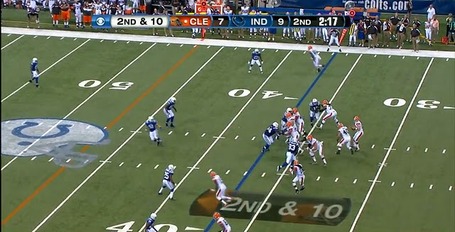 With two high safeties at the snap, we had a numbers advantage on the left side, out-leveraging the Colts there. 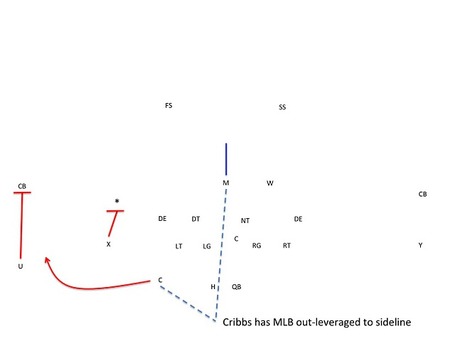 This situation was set up perfectly because Mike LB, who would be the third underneath defender to that side, was constrained by his run and pass responsibilities and because his zone drop took him out of the play. A play fake to RB Peyton Hillis ensured that the Colts had to worry about the run.

If we get this ball to Cribbs, he's in space and running with the ball (this = good for us).

Instead we faked the screen to Cribbs, and threw a screen back the other way to Hillis. This play doesn't work because the Colts have the leverage advantage in that area of the field. The Will LB is not only faster than C Alex Mack, he's further to the (offense's) right sideline. The Mike LB isn't out-leveraged by Hillis the way he is by Cribbs. 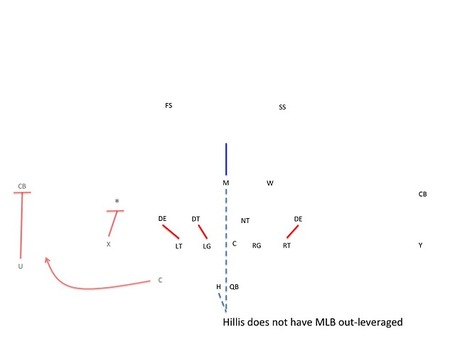 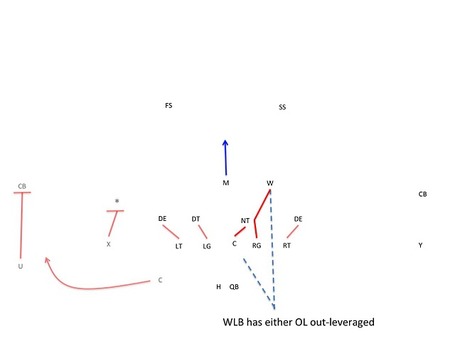 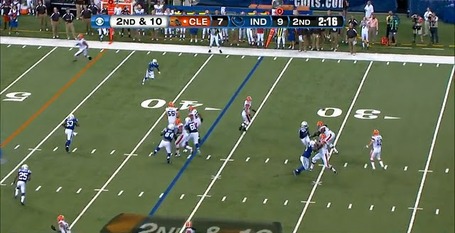 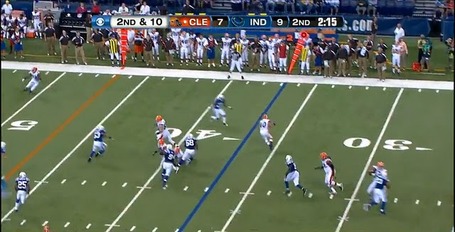 Even if Watson can keep the CB occupied, there is too much pursuit too close to Hillis: 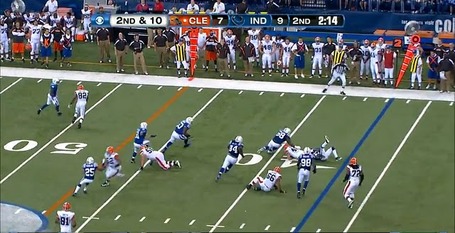 On the very next play, we again came out in a shotgun formation with our TEs split out as receivers to the left. We again put Cribbs in motion and ended up in a trips (3x1) alignment. This time, the Colts showed a single-high safety look (note: I think the coverage was actually 2-high, with S Melvin Bullitt ready to bail deep at the snap). 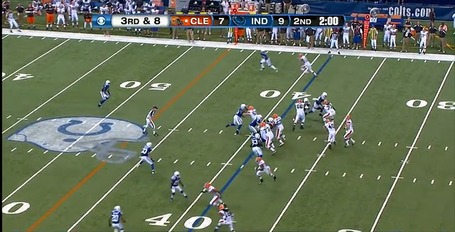 We ran the same play fake to Hillis, which froze the defenders in run support, but this time we did throw the screen to Cribbs. Again constrained by their run responsibilities, the Colts were not in position to get out to stop the WR screen. 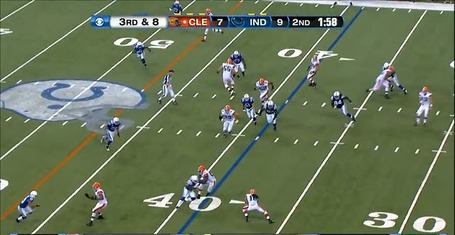 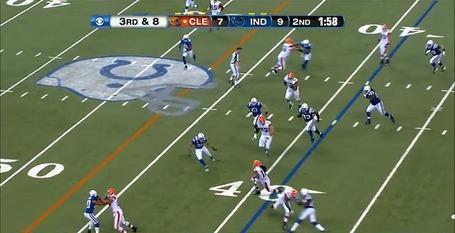 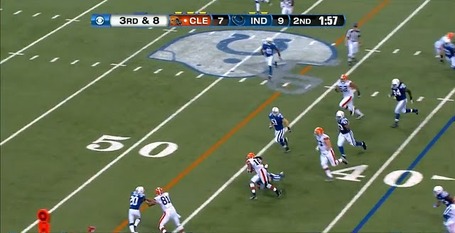 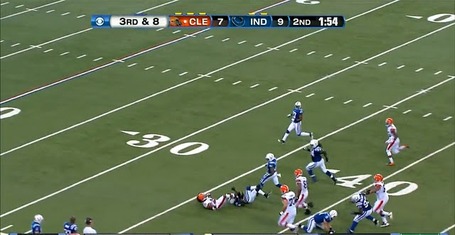 With the defense out-leveraged, Cribbs ran for 25 yards and a huge first down. 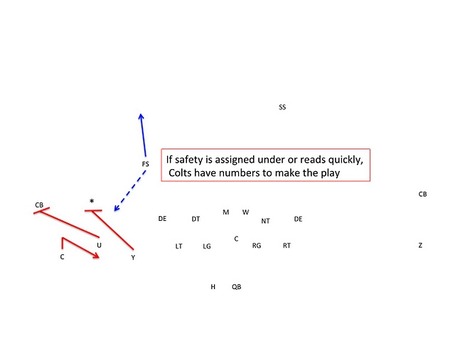 My beef with these two plays is that the one only worked because of luck. If the Colts happened to be in man or happened to have a hard corner rolled up on Cribbs, neither play would have worked. If we continue to run plays like this, we will continue to get lucky occasionally, but we shouldn't rely on luck. We should know that we will beat the defense every time.

The only real way to ensure that the play will work is to give Colt an option read. In the first situation (Cover-2 vs. 3x1) let Colt see how the defense rolls after the snap, and then let him choose the screen to the side with the better numbers. In the second situation (single-high) let him choose between the screen to Cribbs and a quick slant to Little, who has to win if the Colts are singled-up and playing tight man.

If you've had the pleasure of listening to games with Bernie Kosar announcing, you've undoubtedly heard about run plays that are "never going to work" because of a defense's numbers advantage in the box. It's simple arithmetic: if the defense has more guys to stop the run than you have blockers, you're at a disadvantage.

We were committed to running the ball against the Colts, despite the fact that they repeatedly stacked the box to stop Peyton Hillis. By my count, the Colts played with a single-high safety for 44 snaps, and two high safeties on only 16 snaps. Consider that the Colts are known for their "Cover-2 defense", and that's a lot of plays with a safety walked up.

Peyton Hillis' 3.5 YPC were actually a testament to his bruising running style, as he was often hit at or behind the line of scrimmage. This is a structural problem for our offense, not simply a case of our line underperforming (though they did this as well at times).

However, Bernie is only mostly correct. An offense can run the ball while it is outnumbered in the box--if it can out-flank the defense and achieve the numbers advantage to one side of center. One of few times we did this as a team was on Peyton Hillis' 24 yard touchdown run.

On this play we saw EIGHT in the box vs. our 3 WR set. With only 6 blockers, the Colts had a body for every gap plus one extra guy: 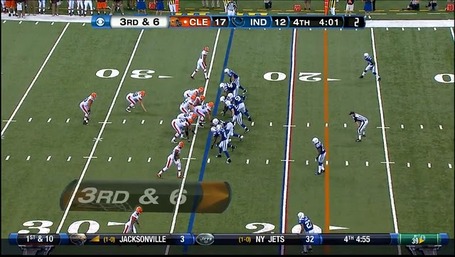 But because of our ability to move the gaps by using a FB and a pulling guard, we were able to achieve a numbers advantage to our left: 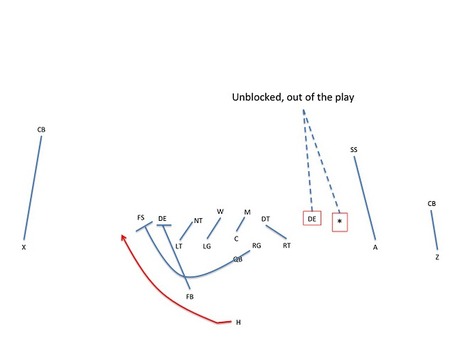 And when we get everyone blocked for HIllis, good things happen: 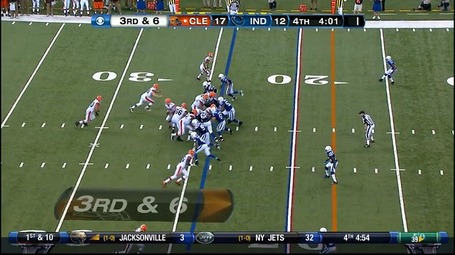 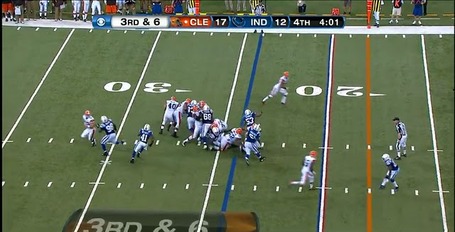 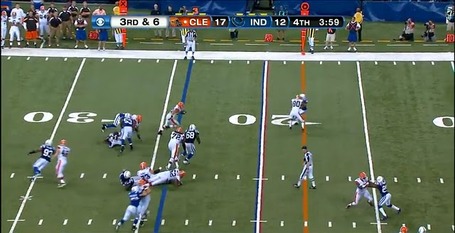 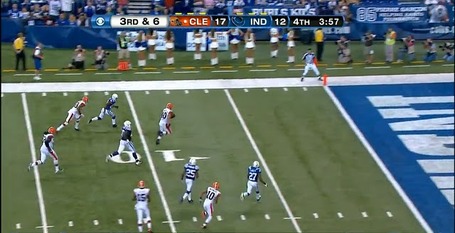 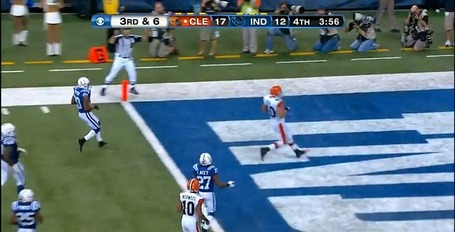