Share All sharing options for: Plays to Remember: Screen Pass to RB Chris Ogbonnaya for 38 Yards

The Cleveland Browns found some success with their screen game early on against the New York Giants. On a 1st-and-20 near the end of the first quarter, RB Trent Richardson caught a screen pass and went for 22 yards and a first down. This is another screen pass the Browns ran. It came on Cleveland's drive that ended with Brandon Weeden throwing his first interception of the game (...but let's not talk about that play any more).

Cleveland faced a 3rd-and-8 situation early in the drive, and they ended up running a screen pass to RB Chris Ogbonnaya for a 38-yard gain. On the previous play, Richardson had dropped a wide open swing pass in the flat that would have surely gone for a first down and more. This is the type of situation -- third-and-long -- where I don't mind bringing Ogbonnaya in, especially when we have the lead.

Picture 1: Let's talk about the personnel for the Browns. There are three wide receivers and one tight end on the play. The receiver at the top of the screen is Greg Little. At the bottom of the screen, Josh Gordon is on the line of scrimmage, and Jordan Norwood is offset a little bit behind him. Benjamin Watson is the tight end next to RT Mitchell Schwartz. And, of course, Chris Ogbonnaya is in the backfield to the left of Brandon Weeden. I believe the Giants are playing man coverage on the outside receivers. One person you should keep an eye on in all of the screenshots, if possible, is No. 66, LG Shawn Lauvao. 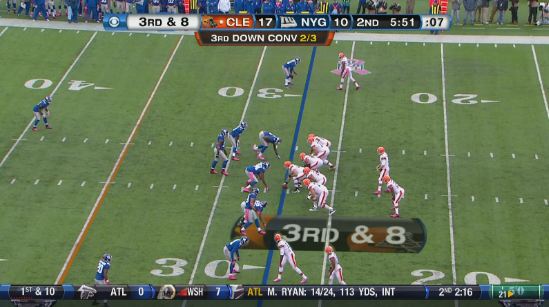 Picture 2: Right after the snap, Brandon Weeden does the customary fake handoff draw to Chris Ogbonnaya. Josh Gordon immediately starts blocking his receiver in the slot at the bottom of the screen, and Jordan Norwood starts turning his body toward his quarterback behind the line of scrimmage. 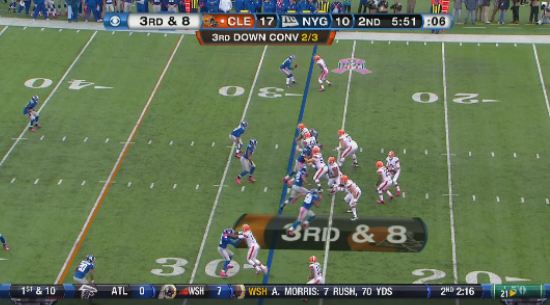 Picture 3: At this point, Brandon Weeden is now pump faking a wide receiver screen to Jordan Norwood. Since the Giants weren't trying to jam Norwood, there is a chance this could have gone for a first down. There is a safety behind the cornerback, though, so Norwood would really have to make two guys miss. You can start seeing Shawn Lauvao creep out to the right side. 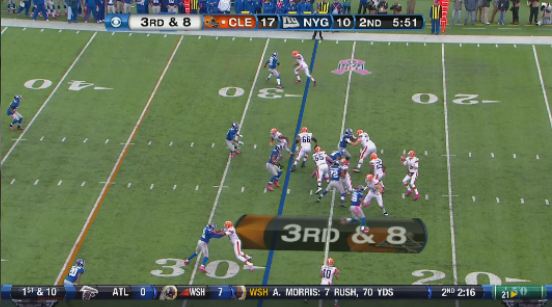 Picture 4: In the previous screenshot (look up again), RB Chris Ogbonnaya ended up giving a slight chip to the guy who Alex Mack is releasing. This screenshot below is fast forwarded a few frames. Now, Chris Ogbonnaya is past the point of chipping linemen and is clearly gravitating toward a lot of open field for a screen pass. Brandon Weeden is rolling to his right. Next to Ogbonnaya, Alex Mack blocking Justin Tuck out of the way. 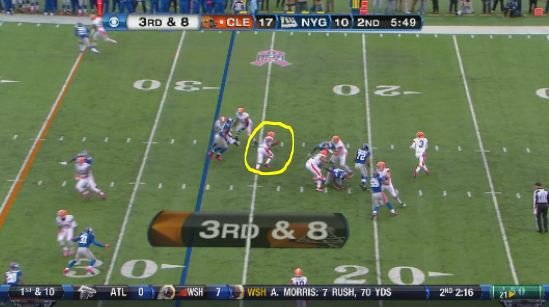 Picture 5: The pass has been delivered to Chris Ogbonnaya, and Shawn Lauvao is out in front as his lead blocker. When Ogbonnaya catches the pass, he will be 2-3 yards behind the line of scrimmage, meaning he needs to travel about 10-11 yards for the first down. 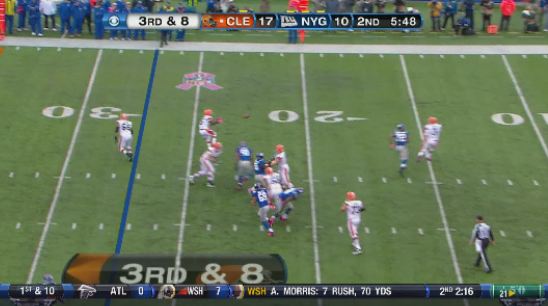 Picture 6: Well...that was easy. Chris Ogbonnaya is already well past the first down marker, and he hasn't even been touched. That tells you how well the screen pass worked in this situation. Now, it is all about getting as much yardage as you can out of the play. Shawn Lauvao, the lead blocker, hits the first guy he sees, S Stevie Brown. He only hits him for a second, but it is enough to allow Ogbonnaya to get past him. 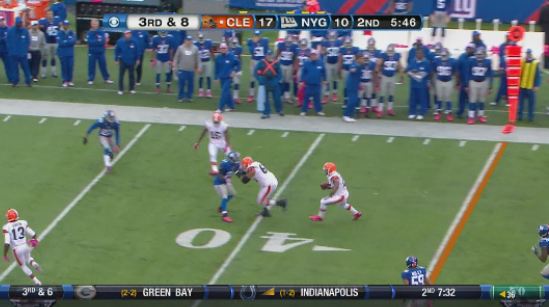 Picture 7: Since the previous screenshot, you can see that Chris Ogbonnaya has advanced about 7-8 more yards already. Your eyes aren't deceiving you -- to the right of Ogbonnaya, Shawn Lauvao is chipping another defender, CB Corey Webster, out of the way. TE Benjamin Watson is the guy blocking No. 57, who is LB Jacquian Williams. Don't worry, I don't know who that is either. Greg Little and Josh Gordon are running around, trying to help get in the way, but aren't really blocking anyone at this point. 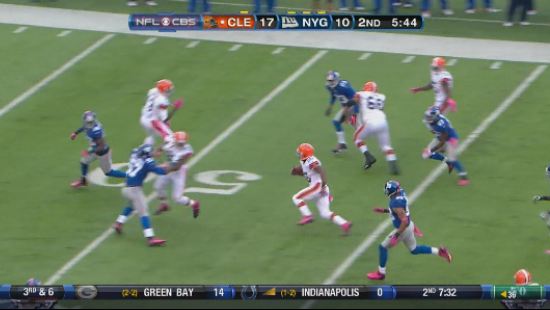 Picture 8: The screenshot below has seen Chris Ogbonnaya progress about 11-12 more yards, relatively untouched. He recognizes that he is about to be tackled by CB Corey Webster, so he puts both arms around the football to make sure no one strips it away from him. In the event that Ogbonnaya had chosen to try to stiff arm Webster, Josh Gordon now had his head around the other way to deliver a block. 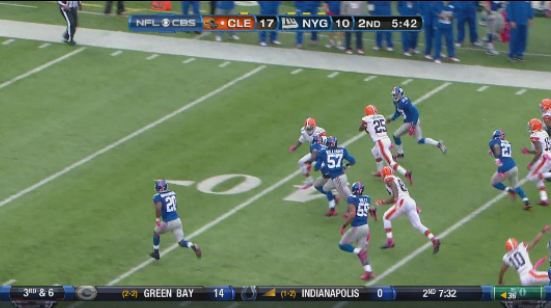 Picture 9: At last, Chris Ogbonnaya is finally tackled at the 34 yard line. He was stoked after the play; just look at his reaction in the picture that leads off this article. Are the Giants just bad at defending screen passes, or after a 22-yard and 38-yard gain, are Cleveland finally starting to time them up and block better? 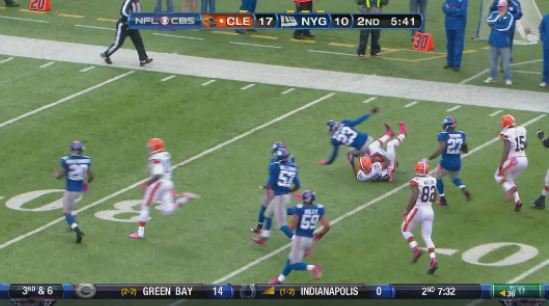 The next two plays were 5- and 4-yard runs to Trent Richardson. That set up the talked-to-death about "3rd-and-1." Yes, I am quoting that play now because of how much it was talked about. Hopefully Cleveland continues to hit these screen passes for big gains the rest of the season.