Share All sharing options for: Plays to Remember: Another Screen Pass to Chris Ogbonnaya, Sparked by Joshua Cribbs' Block

The Cleveland Browns had some failed screen passes against the Cincinnati Bengals last week, but Brandon Weeden would wisely throw the ball into the turf to avoid a disaster. There was at least one successful screen pass, though, and it came early in the game.

Cleveland faced a 3rd-and-9 situation one play after Trent Richardson had hurt his ribs. They ended up hitting Chris Ogbonnaya for a gain of ten yards and a first down. It wasn't an overly flashy play, but as soon as I saw it live, I thought to myself, "yep, that's the play I'm going to highlight on Wednesday." Let's take a look at the details.

Picture 1: Let's look at the personnel for the Browns. There are three wide receivers, one tight end, and one running back in for the Browns. The running back to the left of Brandon Weeden is Chris Ogbonnaya. The two receivers at the top of the screen are Josh Gordon (split wide) and Greg Little (slot). The receiver at the bottom of the screen is Joshua Cribbs. The tight end to the left of the formation is Benjamin Watson. 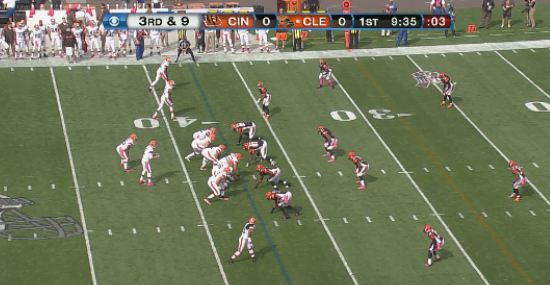 Picture 2: At the snap, Chris Ogbonnaya pauses for a second and then goes out into the flat, ready for a screen pass. This was one of the few plays that Jason Pinkston (No. 62) was still in the game for, and you can see him start to drift out as Ogbonnaya's lead blocker. Greg Little and Josh Gordon are taking off up the field, as is Benjamin Watson. Joshua Cribbs is running a crossing route. 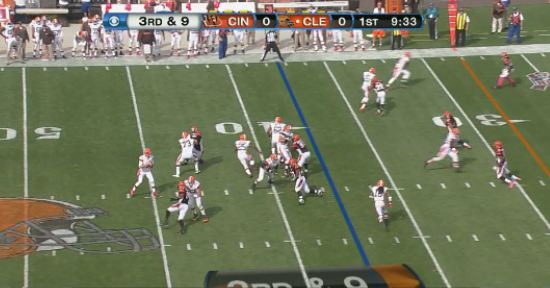 Picture 3:The pass is being delivered. At this point, there is only one defensive lineman who is a threat to reach Chris Ogbonnaya. Thankfully, Alex Mack is stonewalling DE Robert Geathers the entire time. In this freeze frame, the prospects of this play succeeding might not seem very good. You have CB Leon Hall, LB Rey Maualuga, and LB Vontaze Burfict all waiting to shield one offensive lineman to get to Ogbonnaya. But wait...what about Joshua Cribbs? 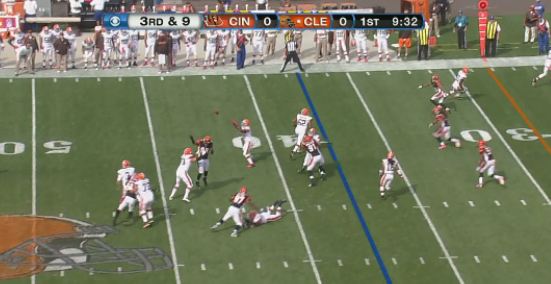 Picture 4: Bang. Watch everyone hit their blocks. Jason Pinkston cuts out Rey Maualuga, and Joshua Cribbs puts a block on Vontaze Burfict. Chris Ogbonnaya has been good at finding the right holes in these types of situations, so he knows to cut this one toward the inside just a bit. 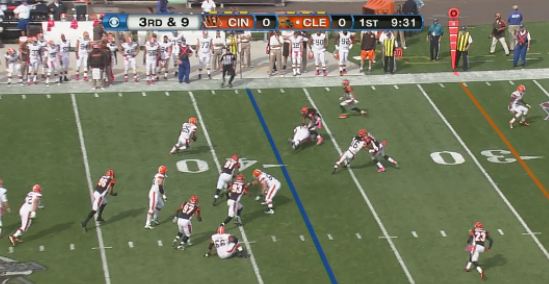 Picture 5: Look at Joshua Cribbs again. He has driven Vontaze Burfict several yards out of the way to help Chris Ogbonnaya see just enough green in front of him. 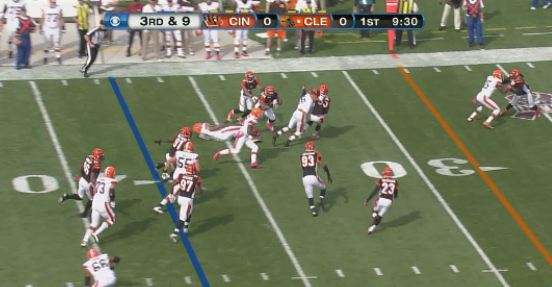 Picture 6: DE Michael Johnson finally races over to tackle Chris Ogbonnaya, but it's too late -- he has enough for the first down. You can also see the work that Greg Little has been doing to keep his guy blocked downfield, and Benjamin Watson is giving his guy the business as well. 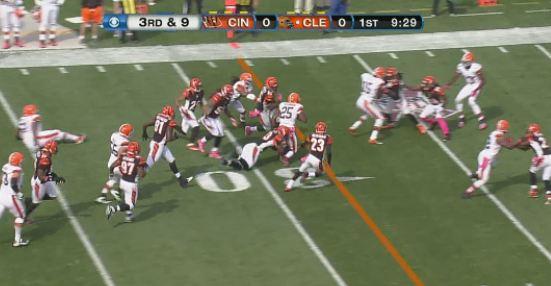 This play is a tribute to another great effort by Joshua Cribbs. I didn't mention it in my official game review, but this is another reason why Cribbs deserved the game ball that I awarded him. I also like how the Browns are mixing it up with their screen passes by only using one offensive lineman as a lead blocker. It seemed like opposing defenses were recognizing screen passes too easily earlier in the season when we would have multiple linemen going out for the screen.