The Cleveland Browns won their second consecutive home game of the season by a final score of 7-6 over the San Diego Chargers. The weather conditions definitely played a factor in the low-scoring affair; Philip Rivers was held to 154 yards passing.

The Cleveland Browns won their second consecutive home game of the season by a final score of 7-6 over the San Diego Chargers. The weather conditions definitely played a factor in the low-scoring affair; Philip Rivers was held to 154 yards passing, while Brandon Weeden was held to 129 yards passing. Receivers dropped passes for both teams, but the difference ended up being the ground game.

The Chargers got the ball first and were moving down the field much like the Colts did to begin last week's game against Cleveland. Facing a 4th-and-1 at the Browns' 30 yard line, the Chargers opted to go for it rather than kick the field goal. The Browns stuffed the quick handoff to Jackie Battle, forcing a turnover on downs.

The Browns then marched down the field and faced a similar situation -- 4th-and-1 at the Chargers' 28 yard line. Pat Shurmur also decided to go for it, and Weeden's quarterback sneak was good for a first down. Two plays later, Trent Richardson took a handoff 26 yards into the end zone for a touchdown. The play involved some jukes by Richardson, but the real highlight was right guard Shawn Lauvao holding Richardson up and then pushing him back toward the end zone. Cleveland had a 7-0 lead.

The game stayed that way until the end of the first half, when Rivers dumped the ball off several times en route to a 43-yard field goal by Nick Novak at time expired. It was a 7-3 game at the half. The final score of the game came mid-way through the third quarter, when Novak hit from 31 yards out to make it 7-6.

The fourth quarter certainly kept things tight. The Chargers got the ball at the beginning of the quarter, but were pinned back at their own 3 yard line after Reggie Hodges' best punt of the season. The Chargers got the ball to near midfield, but on 2nd-and-4, defensive end Juqua Parker made a huge play by tackling running back Ryan Mathews for a loss of five yards. After a false start, the Chargers faced a 3rd-and-14 and could not convert on third down.

Now, the tables were turned mid-way through the fourth quarter. The Chargers downed a punt...3 yard line. Keyed by an early third-down completion to Richardson, the Browns were able to get the ball to near midfield. They didn't score, but they ate up valuable clock in a game where scoring wasn't plentiful. The Browns punted with under two minutes to go, and all the defense needed to do was keep San Diego out of field goal range one more time.

Things got pretty nerve-racking when Rivers completed back-to-back passes to Ronnie Brown for gains of 21 and 11 yards, putting the ball 44 yards away from the end zone with 1:40 to play. The Browns forced four straight incompletions, though, including a fourth down pass that was deflected by cornerback Buster Skrine. 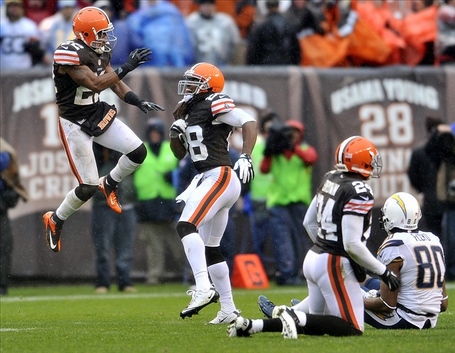 If Skrine doesn't make the tip, the pass might have been completed in field goal range. A couple of knees later, the Browns officially improved to 2-6 on the season, picking up their first win in the Jimmy Haslam era. After feeling short-changed in a few games this year, I'll take this win, even if it was ugly. The Browns even got a go-ahead-dropped-touchdown in their favor this week, when Robert Meachem dropped one in the second half.