Rain Falling at MetLife Stadium; Could Play a Factor in Browns vs. Giants

Share All sharing options for: Rain Falling at MetLife Stadium; Could Play a Factor in Browns vs. Giants

An hour before kickoff, there is a steady rainfall at MetLife Stadium, which could certainly have an impact on today's Cleveland Browns vs. New York Giants game. From the Browns' public relations guy:

Mary Kay Cabot says that it is pouring rain at the stadium. Temperatures are expected to be in the low-50s for game time. There could be other games in the league dealing with rain today too.

Cleveland has dealt with some rain in their past few games, including ten days ago when they took on the Ravens on Thursday Night Football. It hasn't seemed to effect them too much, but at the same time, it could make it a little more difficult for the wide receivers to catch the ball (as if they haven't had enough struggles already). 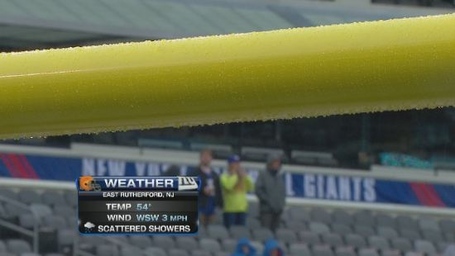