Plays to Remember: The Botched Reverse to Travis Benjamin

Share All sharing options for: Plays to Remember: The Botched Reverse to Travis Benjamin

In Week 1, the Cleveland Browns ran a reverse to WR Travis Benjamin against the Philadelphia Eagles that went for 35 yards. The play probably would have gone for a touchdown, had it not been for the hustle of Eagles cornerback Nnamdi Asomugha. Back then, I featured the reverse as a "play to remember."

Flashforward to this past Sunday, when the Browns brought out what was pretty much the same exact play near the end of the first quarter against the San Diego Chargers. Instead of the play working in Cleveland's favor, it never got going: the exchange between Joshua Cribbs and Benjamin was botched, resulting in a loss of 20 yards and a near-turnover. I won't get into the play design so much this time around; if you want a review of that, re-read how it went down in the link above. What I did want to look at is whether the play would have worked, had it not been for the botched handoff.

Picture 1: The personnel is the same as it was in Week 1. Joshua Cribbs is the receiver at the top, and Travis Benjamin is the receiver at the bottom. The running back is Trent Richardson, and the tight end to the right is Benjamin Watson. There is a slight difference to the formation this time around. Back in Week 1, Alex Smith lined up as a tight end next to Watson, and then came in motion so that he was next to Joe Thomas at the tight end position. This time, he is lined up at fullback. 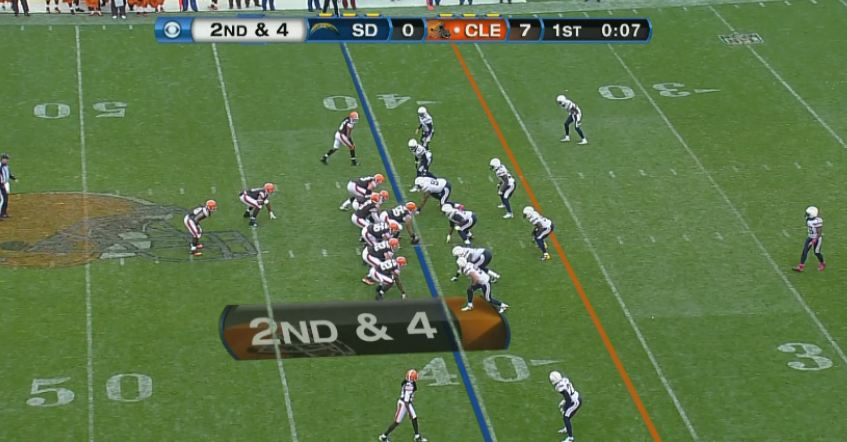 Picture 2: You can see all of the pieces of the play coming together here. Again, the only real difference from Week 1 is that Alex Smith isn't closer to the line of scrimmage, so he starts a little bit further back when setting up his block. 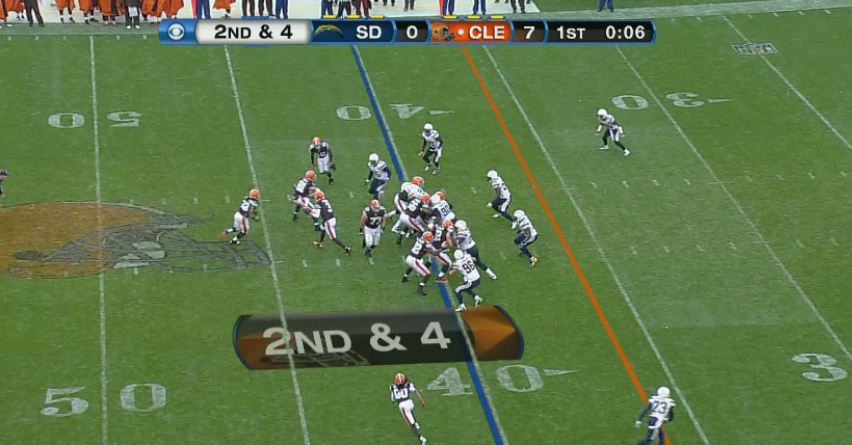 Picture 3: In this screenshot, you can see that Alex Smith is losing his blocker. Is that intentional? I didn't think so initially, but he did to the same thing in Week 1, when I made the comment, "You can see that Alex Smith is starting to lose his man a little bit, but Benjamin is still able to get by him." When Smith is losing his man in Week 1, though, the ball is already being pitched to Benjamin. Against the Chargers, Cribbs hasn't had time to deliver the pitch yet. In the background, there is a lot of congestion of Charger defenders in the middle of the field near the line of scrimmage. 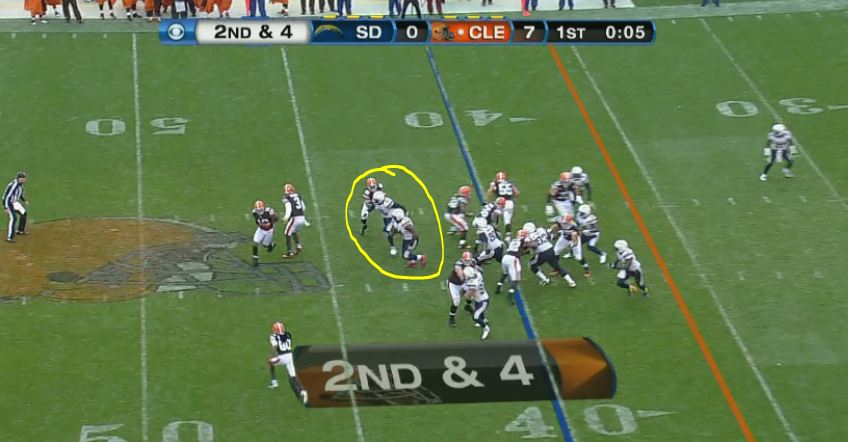 Picture 4: Here is the pitch. Now, let's ask the question of, "what if Benjamin hangs onto the pitch?" He has a convoy of Alex Mack, Trent Richardson, Shawn Lauvao, Benjamin Watson, and Mitchell Schwartz as five lead blockers ready to go down the field (the first yellow circle). The other yellow circle has Joe Thomas ready for some help. Were there any other Charger defenders down the field? 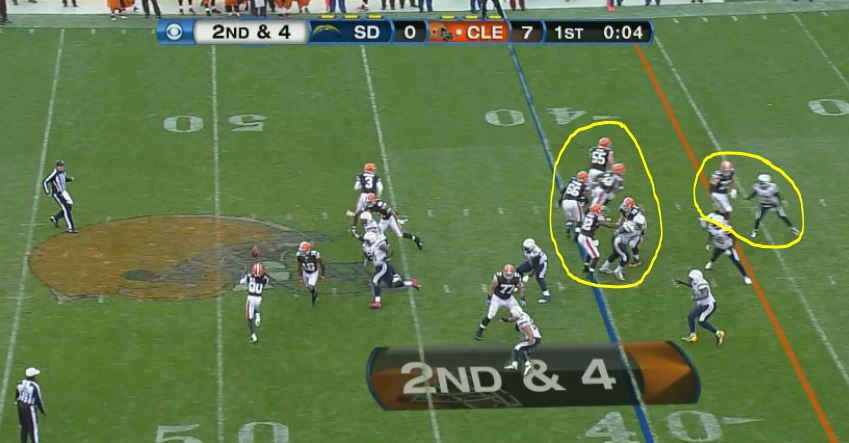 Picture 5: I think Benjamin would have been able to get past the two penetraters. Down the field, this then becomes a punt return. It's going to take another Asomugha-type play to bring down Benjamin, and even if they do, he might be close to the end zone already. Shucks. 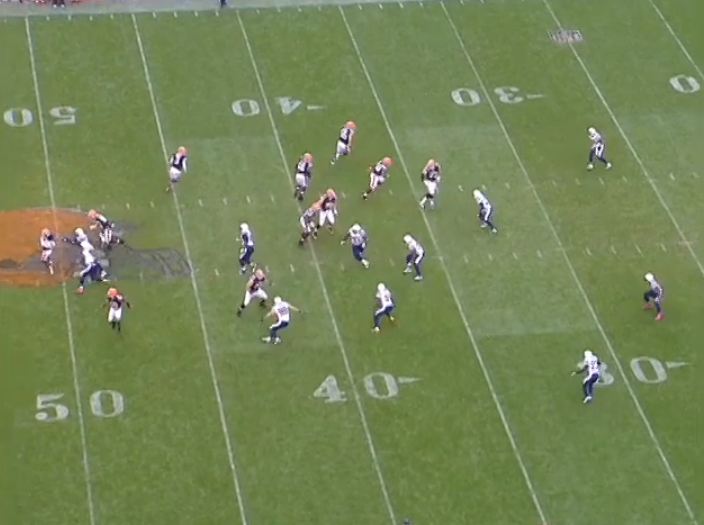 Picture 6: In an interesting little wrinkle, I noticed that the timing of how everything unfolded in the backfield was much slower in Week 8 than it was in Week 1. Was that because of the rain? The screenshot below was when Benjamin received the pitch in Week 1, and the screenshot above is when he [would] have received it in Week 8. Notice how much further down the field the linemen were against the Chargers. 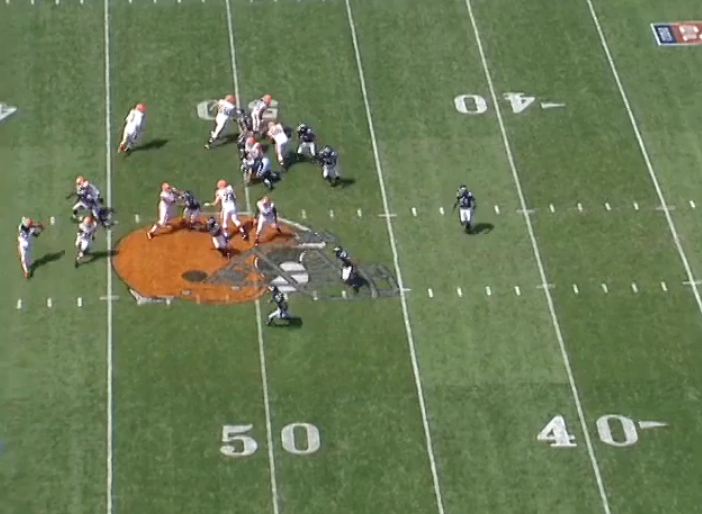 Picture 7: There is one more key element to this play. When the botch happened, Chargers defensive end Kendall Reyes was well on his way to a fumble recovery. Thankfully, Alex Smith sprinted back into action. He didn't try to recover the ball. Instead, he jumped on Reyes' back and hooked both of his arms so that he could not corral the football. That allowed Travis Benjamin to get back to the ball and prevent any further damage. 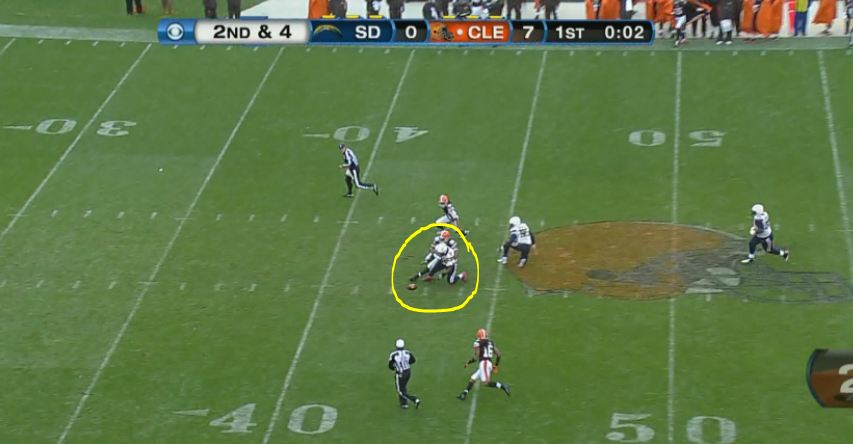 I believe this is the third time the Browns have run this play during the 2012 season. I liked the timing of the call, and it is the type of play opposing defenses wouldn't expect you to run as the end of the first quarter is about to strike. As I stated in my game review, though, the play was a bit risky, given the weather conditions. Since we've seen this play three times already, I'd be interested in seeing a variation of this play later in the season, either with Joshua Cribbs keeping the ball, or Brandon Weeden holding onto the ball the entire time and then dumping it off somewhere for a passing screen.