With the Cleveland Browns on the bye this week, it's time to review how the offense, defense, and special teams units have performed in comparison to my expectations heading into the season. We'll start off with the offense, where Cleveland were set to field a quartet of rookies in QB Brandon Weeden, RB Trent Richardson, WR Josh Gordon, and RT Mitchell Schwartz.

Even though the offense has taken some steps forward in 2012, statistically, they still have a long ways to go in order to catch up with the rest of the league. The pass protection has improved, as the Browns rank fourth in the league in terms of sacks allowed per pass attempt, compared to 17th a year ago. Points per game has also improved by more than five points, but is still below the league average.

The outstanding issues are on third downs and in the red zone. Cleveland has regressed from the 2011 season in both regards, and perhaps no game showed that better than the loss to the Ravens a week ago when they had to settle for five field goals.

If/when Pat Shurmur gets fired, I wonder if he'll have nightmare of 3rd-and-1. The Browns haven't been able to convert it at a very high rate, and the playcalling in those situations has come under heavy scrutiny. Let's look at how the Browns have handled 3rd-and-1 and 3rd-and-2 situations in terms of pass-run distribution this season, and then compare it to other teams in the AFC North.

The Browns have not called enough running plays on third-and-short. I do have an appreciation for breaking a trend, and Cleveland has actually missed some opportunities with dropped passes, penalties, bad throws, etc. However, the fact remains that the Browns drafted a guy at No. 3 overall, and they need to have confidence that he can move the chains in these situations. One of Richardson's struggles has been the fact that he hasn't converted these opportunities, but that's up to the coaching staff to get things figured out then, hopefully during the bye week. 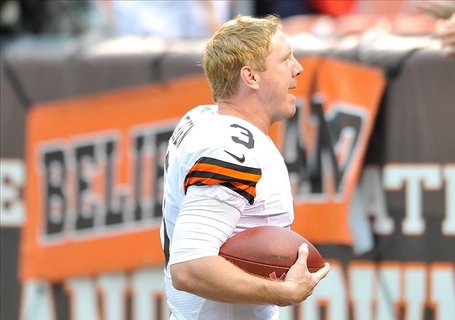 We've seen two versions of Brandon Weeden so far. The ugly version of Weeden showed up on the bookends of the Browns' season to date -- Week 1 against the Philadelphia Eagles, and Week 9 against the Baltimore Ravens. In those two games, Weeden threw for 0 touchdowns and 6 interceptions. In his seven games between that stretch, Weeden threw 9 touchdowns and 6 interceptions.

It's tough to sit back and watch all of the success the other rookie quarterbacks are having. Andrew Luck has the Colts at 6-3 and on their way to a potential wildcard spot. Robert Griffin III's Redskins are only 3-6, but he has certainly lived up to the hype to this point. Ryan Tannehill has been efficient with his Dolphins sitting at 4-4. Russell Wilson held off Matt Flynn in Seattle, and has guided the Seahawks to a 5-4 start to the season. This is one of the strongest quarterback classes in year one that I can remember, but I would still throw Weeden into that group of rookie quarterbacks who have had success.

Weeden has exceeded my expectations because he's grown quickly in an offense that was inept last season, and he's doing so with a group of receivers that have still yet to earn a whole heck of a lot of credibility. Weeden's arm allows the Browns to utilize their vertical threats on offense and move the chains in chunks when they need to. There have been signs of him being a game manager, and with a better group of receivers, his statistics wouldn't look as bad as they do. He hasn't lost a fumble all season, something that was a big concern in the preseason.

I'm looking forward to how Weeden responds against the Cowboys' secondary following the bye, and he's got two divisional games left against Pittsburgh. While Weeden has not necessarily clinched a starting role next season, assuming a new regime is installed, I think he is well on his way to doing so, barring a headcase type of collapse that I don't anticipate coming.

Here are some passing directional stats for Weeden by direction in 2012, courtesy of the NFL: 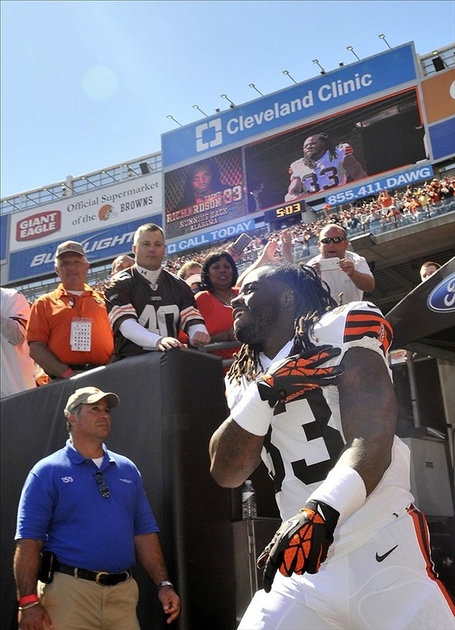 I think my expectations were really high for Trent Richardson heading into training camp, but I tamed them a bit when he had his knee cleaned out and missed all of the preseason games. His debut against the Eagles, with the exception of a head-popping jar, wasn't very noteworthy. He made his mark the following week against the Bengals, though, when he ran for over 100 yards and had 2 touchdowns.

After that game, Richardson had a couple of mixed bag performances. There were either issues with the offensive line's run blocking or Richardson dancing in the backfield too much. Then, Richardson suffered a rib/chest injury, something that plagued him for a couple of weeks and forced Montario Hardesty into action for a little bit.

Over the past two games, despite still battling through his injuries, Richardson has combined for 49 carries for 227 yards and 1 touchdown (4.63 yards per carry). That also coincided with John Greco taking over at left guard. Richardson has been an asset as a receiver, where he leads the team with 31 receptions (for 240 yards). If Richardson keeps up what he's done the past two games for the rest of the season, then he will have exceeded my expectations.

As for the other running backs, it is quite surprising that Brandon Jackson has been stashed on the inactive list as a healthy scratch all season. Montario Hardesty didn't start seeing any snaps until Richardson got hurt, which is something I was fine with. Chris Ogbonnaya has clearly been the team's third-down back, and he has had his moments, including a few key third-down receptions and some nice blocks in the backfield (remember the one on Rey Lewis?). I'd like to see Ogbonnaya get a few more carries so that the Browns are less predictable when he's in the game. He also blew a couple of plays in the two games before the bye with dropped passes and lining up wrong last week against the Ravens.

I don't know if you can have high expectations for the fullback position really, but I was hoping that Owen Marecic would get better after "building the body" in the offseason, and maybe even catch a few passes now that Brad Smelley was drafted and breathing down his neck.

Instead, Marecic hasn't stood out in blocking and has dropped every...pass...thrown...his...way. Ugh. Another change that was made, surprisingly, over the past two weeks is that Marecic has been inactive and replaced by Alex Smith at fullback. 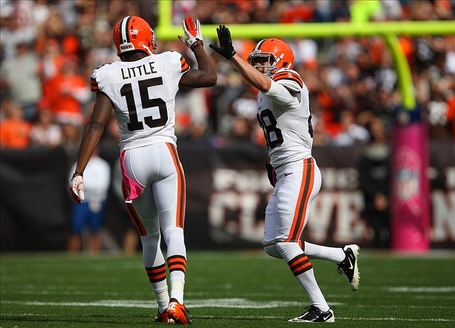 I thought Josh Gordon was lost in the preseason and in training camp; it looked like the kid couldn't do anything right. He has come on strong as the weeks have gone on, though, and leads the team with 417 yards receiving and 4 touchdowns. That drop against the Colts will still haunt me, though.

The reason this unit has fallen below expectations is the fact that there is still a logjam of question marks at the receiver position. I complained about this during the preseason -- we had Gordon, Greg Little, Mohamed Massaquoi, Jordan Norwood, Travis Benjamin, Joshua Cribbs, and Josh Cooper on the team. Heading into the second half of the season, I don't think the coaching staff has a fair idea of who their top four receivers are, with the exception of Gordon, who is being trusted with the most reps.

Little's reps are decreasing. Massaquoi, Norwood, and Benjamin have had to deal with injuries and haven't really played much. Cooper had some nice action in the slot for a few games, but was inactive last week with Massaquoi's return. Cribbs desperately wants the ball on offense and probably has the best hands among the receivers, but can hardly see three snaps a game.

Besides the logjams, the drops have still plagued this unit. To summarize, I am encouraged by the players we have, but I'm concerned that the coaching staff doesn't seem to know who the top three-four key guys are going to be.

This should say it all: after being the darling of training camp, Jordan Cameron has a whopping 12 catches for 140 yards.

I know this is going to sound ridiculous considering the fact that he still hasn't caught a pass in Seattle, but I really miss Evan Moore as a threat in the passing game. Benjamin Watson hasn't had a significant impact in the receiving game. 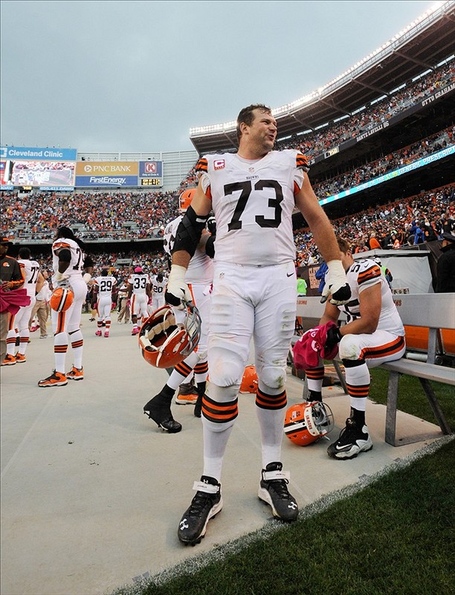 I was a little worried with how Joe Thomas was doing in the first couple of games, but he has since appeared to return to form. Right tackle Mitchell Schwartz has been better than I expected; a position that was a huge liability a season ago is now as stable as you could ask for, in my opinion. Alex Mack has been dandy at center, as usual. The disappointment has come from the guard positions. I thought Shawn Lauvao and Jason Pinkston started playing well to close out the 2011 season, and I felt that would carry over into their sophomore season.

While the unit has kept Weeden clean all year in pass protection, there were games -- including ones against teams with poor ranked run defenses -- in which Cleveland was getting dominated at the line of scrimmage. They also haven't seemed to get a very good push in short yardage situations, which I'm sure is why Shurmur has rolled the dice to pass the ball more than expected in those situations.

The guard positions should be evaluated for the future. John Greco has stepped into the starting lineup now that Pinkston is out for the year, and the running game has seemed to improve since then. This unit can improve to "exceeds expectations" if the run blocking keeps pace with the past two games.

Here is the Browns' play directional report for the running game in 2012, courtesy of the NFL:

The changes would be Smelley at fullback, and Massaquoi at receiver in favor of Little. I think Little would still have a good amount of playing time, but Massaquoi has good chemistry with Weeden during the first two games of the season before getting hurt. He has the bye week to recover and will eventually get back to being a starter.

Let us know in the comments section what your overall assessment of the Browns' offense has been this season. Which positions have exceeded your expectations, and which ones have come up short? Do you see things getting better over the final seven games, or will we have to wait until next season?