Injuries and suspensions have played a factor in the decline of the Cleveland Browns' defense during the first half of the 2012 season. Have any of the units on the team exceeded expectations? Our midseason defensive review is below; if you missed our offensive review, click here.

For all intents and purposes, the only thing the Browns' front office did this offseason defensively was improve one of the defensive end positions with two players (Frostee Rucker and Juqua Parker). The Browns lost DT Phil Taylor and LB Chris Gocong to injury before the start of the season, and we knew a suspension was looming for CB Joe Haden. The safety position was a question mark after the team chose not to re-sign Mike Adams. During the season, DT Ahtyba Rubin, LB Scott Fujita, and CB Dimitri Patterson have missed a significant amount of time to injury.

As for the other statistics, the Browns are registering less sacks than they did a year ago; Jabaal Sheard only has two sacks at this point after having 8.5 sacks all of last season. On the plus side, the Browns are averaging more interceptions per game than they did a year ago. The defense has been coming up with a few more stops on third down, but a big negative is the fact that they are giving up a lot more touchdowns in the red zone (I'd factor the loss of Gocong into that one). 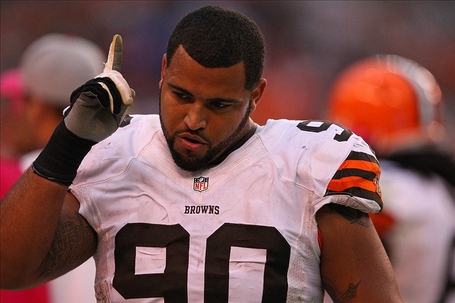 Heading into the season, we knew the Browns were going to be without Phil Taylor for at least half of the season. He finally made his return against the Ravens prior to the bye and played in 50% of the snaps. Given Taylor's injury, my expectations were that Cleveland would suffer a hit, but that at least one of their two rookies -- Billy Winn or John Hughes -- would come on strong enough to not be a glaring weakness.

When Rubin has been healthy, I think he's been fine, but not as impactful as he was during his first season in the 4-3 defense a year ago. Between Winn and Hughes, Winn has been able to make the bigger splash and has seen the majority of the reps in place of Taylor. He has been able to get a nice pass rush for a defensive tackle. Hughes looks to be a good rotational player who gives a high effort, but has been forced into too many reps than preferred for the first half of the season.

Losing Taylor and having to play with two rookies could have been a disaster, but the youngsters held their own. It looks like the Browns are going to have Taylor and Rubin back to start the second half of the season, meaning Winn and Hughes will do what they were expected to do when they were drafted: be rotational players. Hopefully they can use the extra experience they've gained to their advantage.

Here is the play directional report of how opposing teams have attacked the Browns' run defense in 2012: 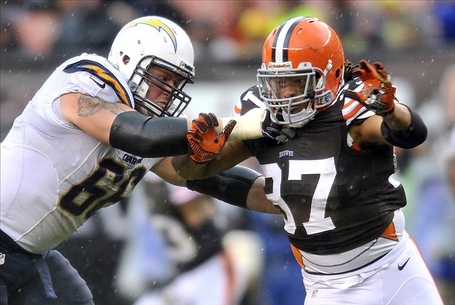 I didn't expect the Browns to have elite-level defensive ends, but I was hoping Jabaal Sheard would match the type of production he had a year ago. Instead, in my opinion, for the number of reps he is getting, he has been a non-factor for the majority of a game. The coaches have cited that he has improved against the run. While that might be true, we need him to be a premiere pass rusher. Maybe now that Taylor and Rubin will be back for the second half of the season, Sheard will command less double teams and get some more pressure.

On the other side of the field, the combination of Frostee Rucker and Juqua Parker has worked out pretty well. The duo have offered more stability than Jayme Mitchell did a year ago, and together they've generated more sacks (4) and quarterback hits (10) than Sheard has. It's too bad that Emmauel Stephens got hurt a couple of weeks ago, because he was providing a spark as a seldom-played linemen. During the second half of the season, we might see more of Billy Winn at defensive end actually, which would allow the newly-promoted Ronnie Cameron to get some work at defensive tackle.

In summary, if Sheard had slightly more production this season, I would've listed this position as "on par with expectations." 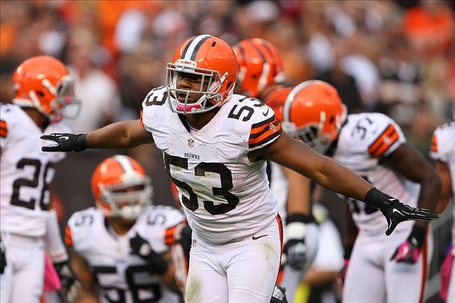 The Browns were set to maintain the status-quo from a season ago with D'Qwell Jackson, Chris Gocong, and Scott Fujita as the starting linebackers. In that scenario, Kaluka Maiava would have been a primary backup on the outside, and then one of the team's low-level draft picks or undrafted free agents would have been another backup.

Instead, we learned that Gocong would miss the entire season with an injury, and that Fujita's status was in doubt due to bounty-gate. The primary replacement for Fujita, rookie James-Michael Johnson, suffered a rib/oblique injury at the end of the preseason. To say that expectations weren't very high for a starting lineup of L.J. Fort/Craig Robertson, Jackson, and Maiava would be an understatement.

Jackson has played pretty well, but he's missed more tackles this season than I remember all of last season. Like Sheard, I hope having the big duo back up front will allow him to be more aggressive in stopping the run. Maiava has been relatively quiet at his outside linebacker position. It's still too early to evaluate Johnson, who had a good game three weeks ago against the Chargers. The person who has had the biggest impact if Robertson as a nickel linebacker, but I'd still prefer having a guy like Gocong in that role. The plus is that the linebackers have accounted for six turnovers this season; the negative is that those turnovers have come in spurts. 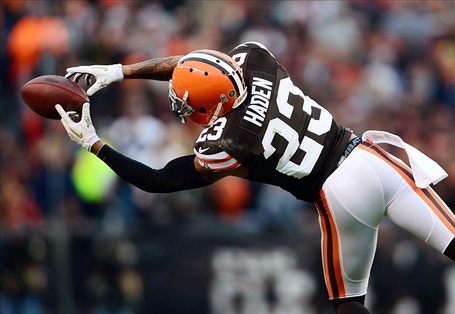 Heading into the season, there was a big question mark looming over the secondary: would Joe Haden be suspended for four games, and if so, when would it take effect? After playing in Week 1 against the Eagles, Haden was suspended and missed the next four weeks.

Even without Haden, I was confident in the cornerbacks the Browns were set to field: Sheldon Brown, Dimitri Patterson, and Buster Skrine. I was even intrigued to see rookie Trevin Wade in action. Despite each guy having some tight coverage while Haden was absent, the unit was consistently torched by opposing quarterbacks. The Browns lost all four games that Haden was absent, and dropped to 0-5 on the year. Since Haden's return, the Browns are 2-2, and the trickle down effect on Brown and Skrine has been apparent. Patterson is dealing with an ankle injury that looks to keep him out into the second half of the season.

Perhaps an "incomplete" grade would be better for the secondary because of how different they've played with and without Haden. Because I thought they could hold their own without Haden and was wrong, though, I suppose they've fallen short of my expectations.

Here is the play directional report of how opposing teams have attacked the Browns' pass defense in 2012: 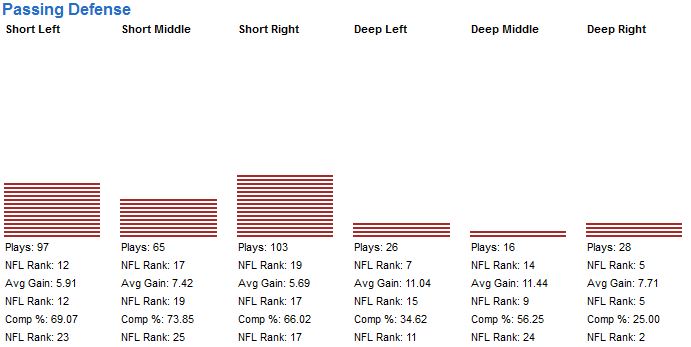 I was upset that the Browns did not re-sign Mike Adams in the offseason, and I think he is the most underrated loss of the 2012 season. If there one move I'd point at and fault Tom Heckert for, it would be not retaining Adams. 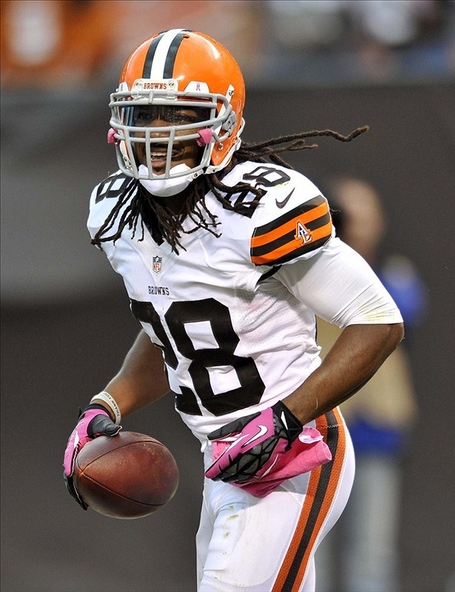 With that said, my expectations were fairly high for the safety position heading into the season. When Eric Hagg was basically named the starting safety early in OTA's and minicamps, and then through all of training camp, I tried to convince myself of the following: "hey, if the coaching staff was willing to get rid of Adams and put Hagg in the starting lineup right away, maybe, just maybe, this guy is going to be a gem." Instead, the Browns benched and deactivated Hagg just three games into the season. Wow. To make matters worse, he was replaced by Usama Young, who really hasn't shown the tools to be a starting safety over the past two seasons.

T.J. Ward has been a mixed back, as he's been bothered by a hand injury. I still question his coverage ability, but he's still racking up tackles overall. I think I was hoping Ward would be able to take that next step forward in his career, but he hasn't.

Besides the defensive tackle returning to normal, I have three predictions: Robertson taking over for Maiava at weakside linebacker, Hagg reclaiming his starting role at free safety, and Skrine taking over for Brown. As much as I like Brown, he is in the final year of his contract. If he's not going to be re-signed, it's worth taking another look at Skrine as a starting corner. The same situation applies to Robertson/Maiava; Maiava is in the final year of his contract. At safety, I just don't like Young as a starter.

Let us know in the comments section what your overall assessment of the Browns' defense has been this season. Which positions have exceeded your expectations, and which ones have come up short? Do you see things getting better over the final seven games?