The midseason reviews for the Cleveland Browns offense and defense can be found here: offensive review | defensive review. The last unit we need to dive into is special teams, as we investigate how Phil Dawson, Reggie Hodges, Joshua Cribbs, and the coverage units have been doing this season.

The Browns have improved in their return game, and it's pretty surprising to be ranked second on both kick returns and punt returns despite not having a touchdown on special teams this season. As for the Browns' 31st ranked punt coverage unit, I think that number is inflated due to what the Bengals' return men did in two games against the Browns. With that said, the number is also indicative of the fact that Cleveland has had some issues covering punts, hence why the punter has been instructed to boot the ball out of bounds on numerous occasions. 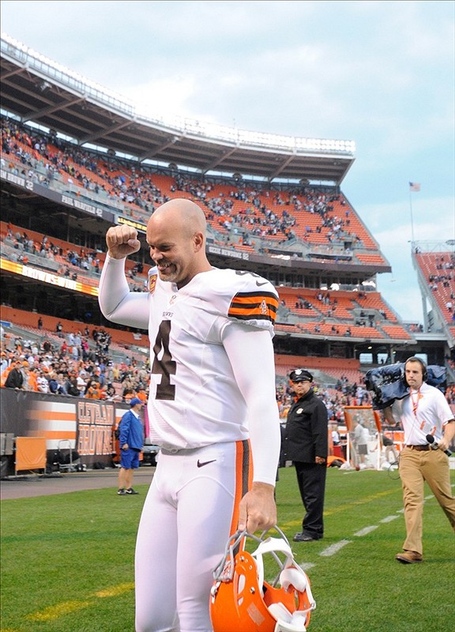 I love Phil Dawson and really shouldn't be surprised by anything he does, but his 17-of-17 start to the season has certainly exceeded my expectations (I'd usually expect two to three misses). Dawson has been 9-of-9 from beyond 40 yards, including four successful tries from beyond 50 yards. Dawson is trying to achieve perfection for the first time in his career; the closest he came was during the 2005 season, when he connected on 27-of-29 attempts.

On kickoffs, Dawson ranks 29th in the league among kickers with only 30.9% of his kickoffs being knelt down for a touchback. It's not doing teams much good to return Dawson's kicks, though, as evidenced by the fact that returners are only averaging 20.4 yards per kick return. In fact, when it comes to the Browns stopping kickoff returners inside the 20, Dawson ranks 2nd in the NFL, achieving it 30.2% of the time.

Here are some relevant statistics for Reggie Hodges, comparing the 2010 season to his 2012 season. 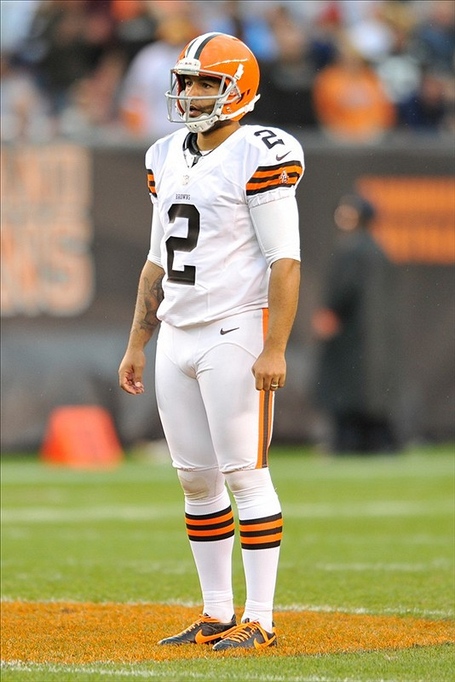 Hodges ranks 2nd in the NFL with 16 punts downed inside the 20, but you do have to consider the fact that he's also attempted the 2nd most punts in the NFL at 55. Hodges' averages might not seem like they are down consistently, but they are when you look at his league ranking. Hodges has definitely has some difficulty in his return season from an Achilles' injury. He also botched the hold on a clean snap that prevented an easy extra point attempt.

In this article, Hodges said that he stayed in Cleveland and worked on his punting during the bye week, hoping to get better results the second half of the season.

"I was hit or miss there for a few games, believe me, I understand that," he said. "We’ve played in rain five times this year — three with 35 mph wind gusts to make it even tougher — and it wasn’t easy finding the winds and kicking through them. I feel like I’ve gotten in a good groove now, which is why I’m making sure I don’t lose my rhythm during this five or six days off. When we get back to practice Monday, I want to pick up right where I was in the Baltimore game and build on it." 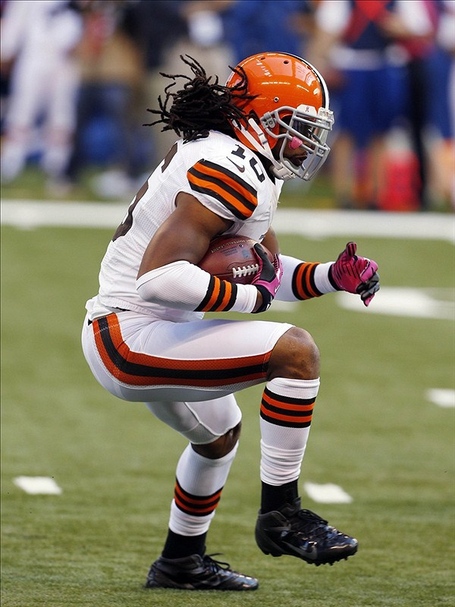 The Browns' primary return man has been Joshua Cribbs. He's been much healthier this season, and the results are paying dividends. He might not have the flashy touchdown, but he's making those first couple of defenders miss for some tough extra yardage. He's also set the offense up with some great field position a couple of times. Cribbs has lost two fumbles in the return game -- one when he got knocked out against the Ravens, and one during a bad stretch Cleveland had against the Giants. Cribbs has exceeded my expectations because I expected him to be hampered by injuries again, but that hasn't been the case.

Long snapper Christian Yount has done everything you could ask for on snaps this year: no mistakes.

Let us know in the comments section what your overall assessment of the Browns' special teams has been this season. Which positions have exceeded your expectations, and which ones have come up short? Do you see things getting better over the final seven games?