Cleveland Browns safety T.J. Ward was fined $25,000 for the hit he placed on wide receiver Kevin Ogletree in the fourth quarter of Sunday's loss to the Dallas Cowboys. The officials flagged Ward for helmet-to-helmet contact, but replay reviews showed that the hit seemed clean, despite its high-impact nature. Ogletree suffered a concussion on the play, as did Browns cornerback Buster Skrine.

Ward is appealing the fine and insists that there was nothing wrong with his hit:

Defensive coordinator Dick Jauron also stuck up for Ward on Wednesday during a news conference:

Here is a screenshot of Ward's hit so you can judge for yourself: 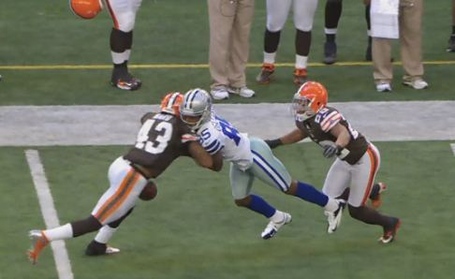