The Pittsburgh Steelers are without starting quarterback Ben Roethlisberger again this week, and that should be gravy for Cleveland Browns fans. Although there would be a much greater level of satisfaction in beating the Steelers at full strength, the fact is that without Roethlisberger, Pittsburgh loses perhaps their biggest competitive advantage on gameday.

Although Byron Leftwich and Charlie Batch have very different styles of play, neither one of them is going to light the world on fire, and Cleveland has to capitalize on this opportunity to make a dent in Pittsburgh's playoff aspirations.

#1 - Don't Assume Anything: I think there are two types of attitudes that the players on the Browns can have heading into this game. On one hand, while they might usually fear inferior to the Steelers, they may now think, "great, we can beat this guy now." On the other hand, they can think, "we don't care who is back there -- we're going to give him hell." I hope their mentality is more along the lines of the latter viewpoint. If there is anything we know about the Steelers and head coach Mike Tomlin, it is that they put themselves in position to succeed even when they are without Ben Roethlisberger. I think the injury to Byron Leftwich threw a wrench in last week's plans; with a healthy Leftwich, they probably beat the Ravens.

#2 - Determining What Batch Offers: The next man up is Charlie Batch, and the coaching staff will try to ensure that the 37-year old becomes a game manager. Batch is 5-2 as a starter in his career with the Steelers. He started the final game of the season against the St. Louis Rams in 2011, and Pittsburgh won 27-0. Batch didn't set the world on fire, but the Steelers still got it done.

What intangibles does Batch offer at this stage of his career? He knows the system, he has a quick release, and he's accurate with the throws he is comfortable with. He is not going to beat the Browns outside of the pocket or deep down the field. This is a game that will be screaming for the Browns' cornerbacks to be aggressive; cornerback Joe Haden is expected to start, and since the Steelers' offensive line gives up some pressure, Batch might have no where to go if those short routes are cut off.

Fans want Dwyer to be the primary back, but Mike Tomlin hasn't committed to him fully yet and has tended to "ride the hot hand" instead. That might be tough to do against a Cleveland defensive front that looked as strong as ever last week. With Ahtyba Rubin and Phil Taylor in the lineup for the first time all year, the Cowboys' Felix Jones only managed 14 carries for 43 yards.

#4 - Big Plays Lacking, But Still Tough Defensively: The subheading says it all. The Steelers have really been lacking in "special" plays defensively this season (i.e. sacks and interceptions). They rank 22nd in the league in sacks and 29th in the league in interceptions. One of the reasons those figures are low is the fact that safety Troy Polamalu has only played in two games this year. For all intents and purposes, he has been out since Week 1. He practiced on Friday for the first time in weeks, but he is listed as doubtful for this week's game.

The lack of Polamalu's presence hasn't meant that teams have been destroying Pittsburgh on the scoreboard. Pittsburgh ranks 1st in the league defensively. Breaking that down into the two facets of the game, the Steelers are 5th against the run and 1st against the pass. 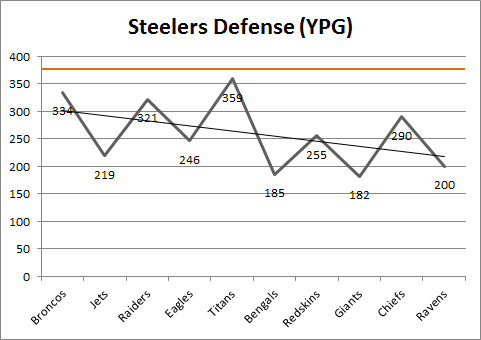 Above is a breakdown of the Steelers' defense in terms of total yards allowed per game this season. They have been improving as the season has gone on, as the trend line shows. What is the orange line? That is the average number of yards per game the Browns' defense has allowed this season. That's right -- Pittsburgh's defense has not yielded more yards than the Browns' average yardage on defense all season long. Our offense has to execute to avoid the type of last-second game that even Batch can pull off.

#5 - Special Teams Overview: The kickers in the AFC North are on a tear this year. Phil Dawson remains perfect for the Browns, but Shaun Suisham has connected on 21-of-22 attempts for Pittsburgh. The Steelers have done fairly well in the return game, ranking 6th in the league on kick returns and 18th in the league on punt returns. The primary kick returner is running back Chris Rainey, who averages 27.8 yards per return. Antonio Brown is Pittsburgh's regular punt returner, so we'll see if he's back this week or not. The Steelers have been a bit vulnerable in kick and punt coverage, though, where they rank 24th and 23rd in the league, respectively. One of the reasons Pittsburgh lost by a score of 13-10 last week to Baltimore was the fact that Jacoby Jones had a 63-yard punt return for a touchdown. Punter Drew Butler is near the bottom of the league, right near Reggie Hodges, which means he probably won't be booting the ball super deep if Batch gets backed up in his own territory.