The NFL announced the Pro Bowl rosters today, and the Cleveland Browns will have at least two players representing the AFC. Left tackle Joe Thomas has made the Pro Bowl for the sixth consecutive year. That seemed like a given. The one that Browns fans should be especially proud of is the fact that for the first time in his 14-year career, kicker Phil Dawson has made it as well.

Dawson has been one of the most consistent kickers in NFL history year in and year out. The Browns have used the franchise tag on him two years in a row, but that seems unlikely to happen for a third consecutive season given the outrageous money he would have to be given. If this is the end of the road for Dawson in a Browns uniform, I'm thrilled that he was finally recognized for his achievements (besides just Cleveland fans rooting for him). If you have the chance, head on over to Twitter and give a shot out to @phil_dawson_4. 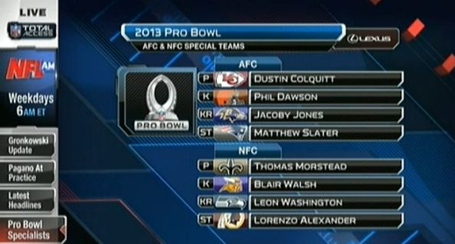 The full Pro Bowl rosters can be found here. Do you think there were any snubs or surprises?

Cleveland Browns in the Pro Bowl