Steelers Players and Fans Complain About Phil Taylor, Brush Aside Own Hits

Share All sharing options for: Steelers Players and Fans Complain About Phil Taylor, Brush Aside Own Hits

I have never seen a cheaper hit than the one Phil Taylor just put on kelvin Beachum. Fine him a game check. #nfl #nflcommissioner

That might just be the most ridiculous tweet I've read this year, especially coming from a former NFL player (Hoke, a defensive tackle, retired from the NFL after the 2011 season after spending a decade with the Steelers). Steelers' offensive tackle Max Starks, among other players, complained about Taylor after the game:

"You know I don’t like to say negative things about people," Steelers LT Max Starks began afterward. "It was a cheap hit on Kelvin [Beachum] today. Actually [Taylor] tried to hit me earlier in the game but I saw him out of the corner of my eye and kind of slowed down so he just chipped me. Kelvin, it was a blatantly cheap play. [Dwyer] was on the ground, and he went and blindsided [Kelvin] late. That’s something we just don’t go for, especially this late in the year. That’s just uncalled for and that’s just classless. From that point forward we just stayed ahead of the curve."

If you haven't heard, Cleveland Browns defensive tackle Phil Taylor has been getting a ton of flak from Steelers fans and players for the hit he put on rookie Steelers offensive tackle Kelvin Beachum in the third quarter of Sunday's game against the Pittsburgh Steelers. The hit was not flagged by the officials, but let's take a look at what happened.

The yellow circles indicate the positions of Taylor and Beachum. The cyan circle is the running back and the pursuing tacklers.

At this point, Taylor is already preparing himself for a hit. Although he's coming from the side a bit, he's also in front of the offensive lineman still. This isn't a late hit, either, because you can see that the running back isn't even down yet. The whistle has not blown.

There it is -- Taylor extends his arm to knock Beachum to the ground just as the running back hits the ground.

Is Taylor's hit illegal? According to the NFL Rulebook, here is the definition of a blindside hit: "A player who receives a 'blindside' block when the blocker is moving toward his own endline and approaches the opponent from behind or from the side." Going strictly by that role, yes, you can certainly argue that it might have been worth a penalty.

It's also a play that has happened numerous times, and I think Anquan Boldin was praised for such a hit on Ray Rice's miracle 4th-and-29 conversion several weeks ago. There was no fine for Boldin's actions on that play, and yet somehow, this is "the cheapest hit in NFL history." I guess the Ndamukong Suh's and Albert Haynesworth's of the world are spared with that one, eh?

Besides, the Steelers shouldn't be the team to talk. You want to know what a dirty player looks like? Take a look at Steelers offensive guard Doug Legursky, who tried to cut out the knees of Browns linebacker Craig Robertson from the side.

The Steelers have a run play going (just under the CBS logo) in the screenshot above. Robertson is being blocked by Legursky here. 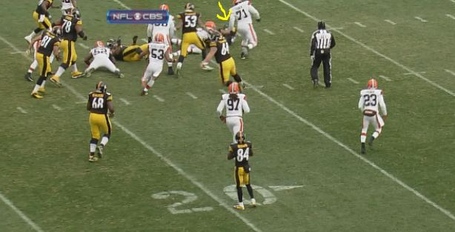 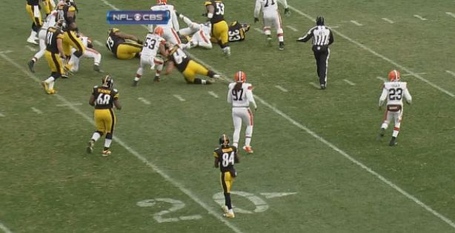 Here goes Legursky trying to blindly cut out Robertson's knees. Fortunately, Robertson recognizes it and shoves him to the ground.

Shall we take a look at a few other hits that epitomize "Steeler football?" Sure, why not: 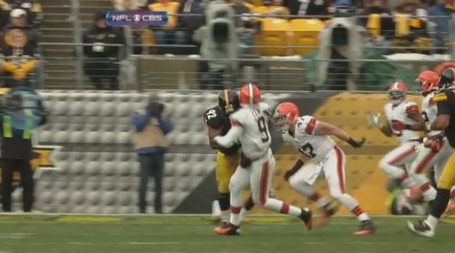 On the play where Thaddeus Lewis throws a touchdown pass, James Harrison continues his perpetual hits helmet-to-helmet shots. There was no intent by Harrison to dodge this; his intent was to deliver a blow to the head. For a repeat offender, Harrison needs to be given a multiple-game suspension by the league next season. Otherwise, thugs like Harrison will continue this type of play that the league was trying to prevent with bountygate. Well, here is an example of a guy who likes to do it in plain sight. 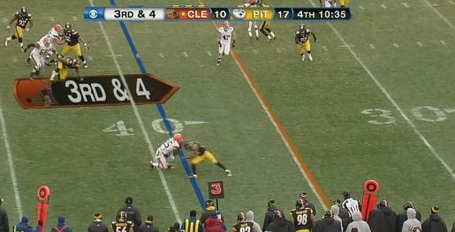 Here's another one; running back Chris Ogbonnaya just catches a ball in the flat, and safety Ryan Clark leads with the crown of his helmet to hit a defenseless receiver in the head/neck area.

Ah, yes. But Taylor is the dirty player. Got it.

Taylor responded to accusations that he was too rough after the game by saying, "It was between the whistles, you have to keep your head on a swivel." Taylor also added, "They played dirty, so ... we aren’t going to play dirty just because they play dirty. We are just playing football and they get mad about it."

Couldn't have said it better myself.