That's right, it's back! Welcome to DBN Shoops. For those of you who are not familiar, here's a quick introduction to what it is and how it works: DBN Shoops is a new weekly photoshop / photo editing parody contest. Each week we pick an NFL related photo and edit it for comedic purposes. Anyone in the community can enter by making their own edit, uploading it, and posting it as a comment here. The one with the most recs will be the winner for that week (note: your only prize is bragging rights and laughter). You can use whatever program you'd like, even MSpaint. Entries can be humorous or just awesome, but be sure to keep it all work safe.

Technically DBN Shoops isn't new. We tried it over a year ago, but it only lasted two weeks. Hence this being Issue #3. You can still read the older issues here and here. This time around, however, things will work a little differently. In addition to the actual contest, I'll go into a little bit of detail about how I executed my own shoop/photochop/edit. Check it out after the jump...

Today's original photo was taken by Andy Lyon/Getty Images. We can see there, Tiquan Underwood is showing off his team spirit with a fancy new hairdo. That's actually a fairly accurate rendition of the New England Patriots' logo shaved into his hair. The idea popped into my head immediately. So I started away at it. 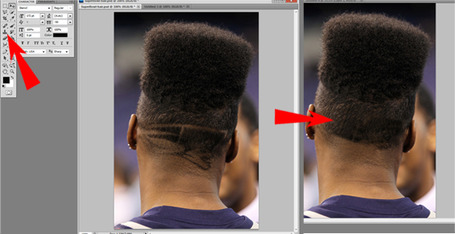 The first step I took after creating a new PSD file was to paste the original photo twice. I like to keep the original in it's current state to use as a reference point and to go back if I make a major mistake.

The next step is to start editing the visible top layer. The plan, as you can already see above, is to replace the missing hair that makes up the logo. To do this I use the "Clone" tool, which you can see the left arrow pointing to. Just like the name of the tool implies, I clone full parts of the hair that come close to matching the shaven areas. After some work, you get the image seen to the right.

Then the fun begins. With the idea of what to shave into his hair already decided, I simply type it with the text tool as a new layer. I round it off a bit and then CTRL+click the text layer to select the area in a marquee. The following step is important to remember: I create a new layer and make the text layer invisible (simply by clicking the "eye" next to it). With the new layer selected and the "18 1" as the marquee, I get back to cloning. This time I use the lower areas with no hair. When that area is entirely cloned and the marquee is deselected, you'll see that it stands out far too much and it doesn't look even remotely realistic. The issue is that the edges are too sharp. There are a lot of ways to fix this. For me, I just contracted the marquee selection by about 3 then inverted it. That meant that I only had the edges selected. Then I went around with the eraser tool and lowered the visibility. This gave it the rough edges I was looking for. Lastly, I gave the same treatment to the dash, shrank it down, and added a tiny bit of "noise" to the whole thing. 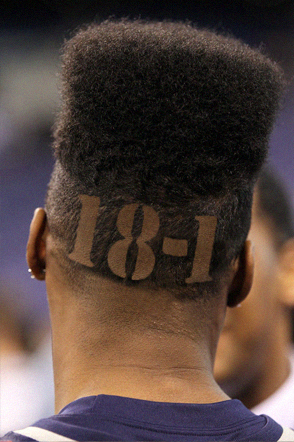 Tiquan Underwood pays homage to the New England Patriots Super Bowl team that came before him.

Now I forward the question on to you, what's in his hair?