Welcome back to DBN Shoops. For those of you who are still not familiar, here's a quick introduction to what it is and how it works: DBN Shoops is a weekly photoshop / photo editing parody contest. Each week we pick an NFL related photo and edit it for comedic purposes. Anyone in the community can enter by creating their own, uploading it, and posting it as a comment here. The one with the most recs will be the winner for that week (note: your only prize is bragging rights and amusement). You can use whatever program you'd like, even MSpaint. Entries can be humorous or just awesome, but be sure to keep it all work safe. You can view last week's issue here. (Congrats to SpecialBrownie, winner of Issue #3.)

In this week's issue we have something a little more simple, but it might have a lot more potential...

Here we see a fan holding a sign with a joke at the New England Patriots' expense during a rally to celebrate the New York Giants' Super Bowl victory at MetLife Stadium on February 7, 2012 in East Rutherford, New Jersey.

The first step is easy. After pasting the image into a new PSD file, I duplicate the layer. Then I start "erasing" the text on the sign with the paintbrush tool. (Note: If you used the actual eraser tool in this case, you won't get the blank sign.)

Once the sign is blank, I make that layer invisible for now. The next step is to get the letters that I'll need to use to re-imagine the joke on the sign. I use the lasso tool (I find the polygonal lasso the easiest) to select each one then copy and paste it as a new layer. To eliminate the excess background, set the layer to "Multiply."

When all the letters that are needed are copied into their own layers, I simply put them in order to spell out the new sign. Lastly, a few of them needed some touching up, and then it's done. Now the sign makes reference to this incident. An even quicker way would be to just use a new font with the type tool. 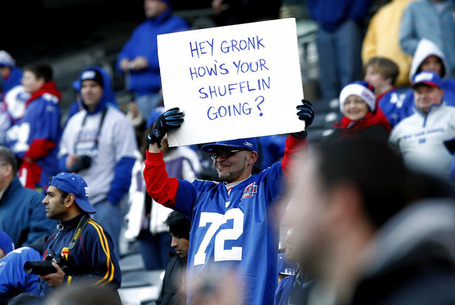 Now I forward the question on to you, what's the sign say?