Dawgs By Nature is holding a tournament throughout March to determine the greatest Cleveland Browns ever. It'll continue to be madness. The winners of each round will be chosen by you. We're calling it the DBN All-Time Browns Bracket.

Last week you nominated and ranked more than 90 competitors, ranging from former Browns players, coaches and even fan communities. After the numbers were crunched, and some bracketology was applied, we were able to narrow the field down to 64 contenders and seed them accordingly. Of course, inevitably there were going to have to be some snubs. There are always those on the outside looking in, and you might think, "Well this snub better than that 16 seed..." ect. There were a handful of automatic qualifiers nominated by guys that forced some of the people on the bubble out of the field. You can debate the results and make your predictions in this thread as the DBN All-Time Browns Bracket is revealed. Voting for the first round will being soon.

Check out the printable bracket after the jump.

Click the image below to view it in full size. 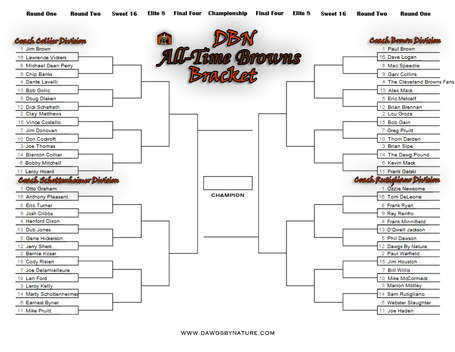