Dawgs By Nature is holding a tournament throughout March to determine the greatest Cleveland Browns ever. It'll continue to be madness. The winners of each round will be chosen by you. We're calling it the DBN All-Time Browns Bracket.

That's pretty much sums up the results of the DBN All-Time Browns Bracket thus far. But, that's certainly not a bad thing. I think that it goes to show that the seeding was pretty accurate. All four of the remaining contenders, the 1. seeds, absolutely deserve to make it this far.

The other matchup of the Final Four is between Paul Brown, who won his own Coach Brown Division, and the winner of the Coach Rutigliano Division, Ozzie Newsome.

You can vote in the poll for who you think should make it to the DBN All-Time Browns Bracket Championship. You can also check out the updated bracket after the jump. 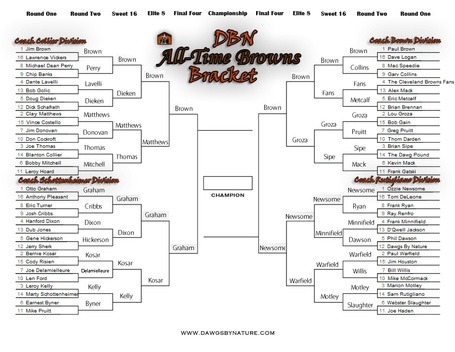 Also, instead of One Shining Moment, we have this:

Hat tip to 24rubikscube for the FanShot of this video.