Say what you will about QB Brandon Weeden, but he's a Cleveland Browns quarterback now. If you're interested, his FFCA interview with Jon Gruden is available here. One thing that struck me about the interview was the play that Weeden put up on the white board.

Weeden isn't Cam Newton, Tim Tebow, or Robert Griffin III. He isn't a threat to run the ball at all really, but Oklahoma State was able to run spread option concepts with Weeden as their quarterback. For various reasons, I think Weeden's option play ("410/Stick") is a perfect example of how the NFL will continue to "borrow" offensive concepts from college teams.

Weeden: "This was stealin'"

How, exactly was the play "stealing?" Why does Gruden think it is a must-have for an NFL offense? And why do I think NFL teams will begin to use these concepts despite prior reluctance to adopt "college" plays? Find out after the jump.

NFL teams have been slow to adopt recent college offenses like Chip Kelley's zone read or Urban Meyer's evolution of the singleback offense. Why these "college" offenses might not succeed in the NFL and why teams don't really try to implement them is a discussion best saved for later. But I'll highlight two anti-"college offense" arguments and discuss why 410/Stick doesn't fit into them.

I think this is one reason the Wildcat is becoming less popular and why the Tebow option offense didn't exactly explode in Denver. Without fully integrating these option plays into your offense, you are basically trying to catch the defense off-guard. Maybe you can catch them on a week where they didn't get to practice option defense. Maybe you catch them with the wrong personnel in the game or wrong defense called. But if these plays are just sprinkled on top of your "real" offense, you are making a bet that paid professionals are going to screw up.

Part of "keeping the defense honest" is integrating one play with others in your offense (think play action passes off of runs). Because NFL teams don't fully commit to running these "college" offenses, adding option plays usually works against them. If NFL teams choose to install the option, they do so instead of installing a play that goes with the rest of the offense.

The other reason NFL teams don't go to these option attacks is quarterback play. First, there are very few Mike Vick/Robert Griffin III caliber QBs who can both run and throw at an NFL level. Second, NFL teams have a ton invested in their QBs. If they go down, their team usually goes down too. And subjecting a player to hits in the NFL is much different than doing so in college. Even 6'8" 300lbs Ben Rothlisburger can't withstand a full season of NFL punishment (h/t Scott Paxson)

The beauty of this play and the reason I think plays like it are the future of NFL teams stealing plays from college are that it both is integrated with NFL offense and protects the QB. Stick is already a play in every NFL offense, as is a draw play from shotgun. The QB's option is between handing the ball off and throwing it and NOT tucking it to run. So this play can really be a meaningful piece of the offense as well as protect your QB from unnecessary punishment.

The Play Itself: Trips Right 410/Stick

I'll start with 410, the draw play. Here, I've drawn it up from what Weeden's Oklahoma State teams called "Trips Right" against a 4-2-5 under front. You can see that with two deep safeties, the defense has 6 in the box against only 5 blockers for the offense. I've keyed the strong side LB and the RB here, because if this draw play were run the LB would be one-on-one with the back and have to make the tackle. 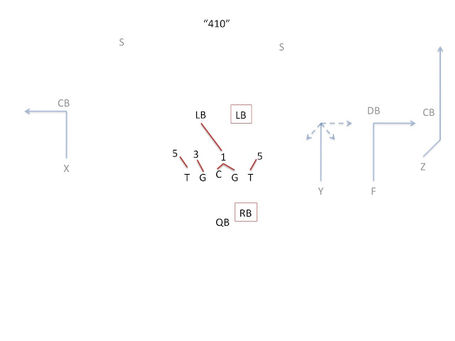 Stick is a simple concept. From this formation, the outside WR is going to outside release and make someone guard him deep. The slot WR (F) is going to run a 5 yard out (probably a "speed out"). The Y will run 5 yards and stick, turning over his inside shoulder: 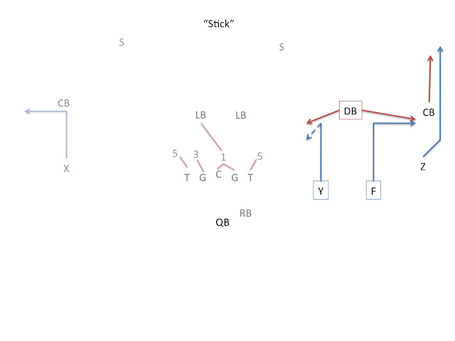 Typically, stick is read off of the "flat defender" who is guarding the area on the line of scrimmage wide, away from the formation. If he widens with the slot, you throw inside. If he stays inside with the Y, you throw to the slot. (Note: this is the same read as the drill Gruden ran with Weeden where Gruden was the defender).

Packaging 410 and Stick together: Vs. two-high its "stealing"

If the SLB is outside to help defend stick, Weeden will hand the ball off. The defense has 5 men to fill 6 gaps, and the RB should be off untouched to the 3rd level. If the SLB stays in the box, the defense has the numbers to defend the run and Weeden will throw to the Stick concept. Once he sees the SLB inside, the offense has three potential receivers where the defense only has two defenders and someone is open. 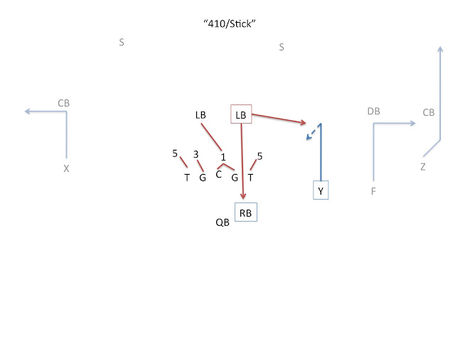 With two-high safeties, the defense simply doesn't have enough men to stop both of these plays. This means defenses are almost forced to play single-high safety defense against this formation.

Vs. single-high it's a little different: Isolations

With an added safety up near the line, the defense now has enough men to both cover the stick concept and the draw. So what is an offense to do? There are several answers.

Depending on down and distance, you might just want to run the draw play and have your back try to pick up a few yards. The draw should influence that LB through pass action, and if Trent Richardson can't make 2 yards singled up on a linebacker, he shouldn't have been the third overall pick. Another answer would be for an offense to throw the stick and give the Y an option to break away from the S. Safety is inside, throw outside. Safety is outside, throw inside. These options are useful when exploiting a mismatch in your favor (fast TE, good RB). But if the defense has the right blitz or coverage called, they could fool you with this approach.

At Oklahoma State, Weeden had the freedom to audible WR Justin Blackmon to routes they liked based on the defense. When the defense rolls that extra safety up, they are now leaving Blackmon (the X receiver) essentially one on one with a CB and half the field to work with. For those of you who watched the Gruden video, this is where that little nod comes in handy. This single-receiver isolation could come in the form of a signal or an option route read on-the-fly after the snap. 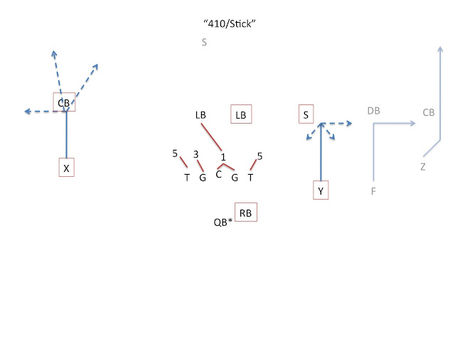 The last option I'll discuss here is the "pop" play Weeden talks about. One of my favorite plays that just happens to work well against a single-high safety is 4 verticals. The play is almost exactly what it sounds like, with 4 guys going vertical and the inside two getting in the "seams" where the single-high safety can't cover them both.

The "pop" play combines 4 verticals with a fake of the 410 draw/stick option. Weeden drops back just like for 410/stick, as the receivers run their 5 yard vertical stems and then begin to break as though they were running stick. Weeden "pops" the ball to the back, faking the draw play. These two things hopefully draw both the linebackers and secondary up to defend the run and the stick, respectively. But instead of breaking, the receivers stutter step and then blow by the coverage, streaking downfield. 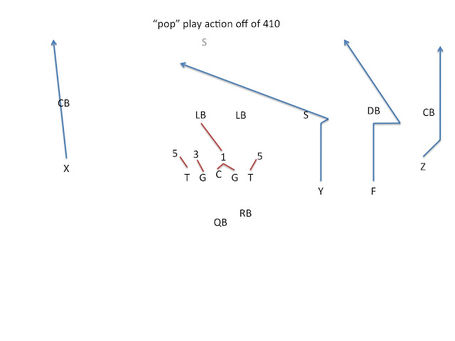 If you burn them with this, the defense doesn't have an easy answer. If they play two-deep, you gash them underneath, and if they play single-high they are vulnerable to 4 verticals. When your plays work this well together and you can keep a defense on its heels, it really is stealing.