The 2011 Cleveland Browns Defense: Base Defense and Overview

Share All sharing options for: The 2011 Cleveland Browns Defense: Base Defense and Overview

With major offensive personnel changes, Browns fans can expect a healthy amount schematic change on that side of the ball in 2012. We can reasonably expect the defense, however, to remain mostly the same. In this post I'll take a look at our base defense and the general principles that guide our defense in it's entirety.

Our overall defensive plan was to stop teams on first and second down and put ourselves in favorable down/distance situations. From the book Coaching Team Defense by Fritz Shurmur:

We were not a high-risk, high-reward defense that blitzed and tried to create big plays. Instead, we took away the big plays from opposing teams. We tried to make them grind out long drives and tried to generate turnovers by allowing risk to accumulate for the opposing offense. If you send Shaq to the free throw line enough, he'll probably miss one, just like if you give the offense enough chances to fumble or throw a pick, they probably will.

Our goal was to get offenses in 2nd or 3rd and long and put them in the low percentage situation of converting. We played the schematic equivalent of allowing a QB to throw for a high completion percentage while trying to reduce his efficiency (YPA) by limiting yards per completion.

When an offense has to make a lot of first downs to march down the field, can't make big plays, and has trouble scoring touchdowns in the red zone they look pretty bad. Sound familiar?

Pursuit is key to any scheme and it was something that Dick Jauron really brought out of our defense. More defenders around the ball means less missed tackles, better chances at creating or recovering a fumble, less yards after contact/catch, and a host of other good things for any defense.

Based on subjective observation, our pursuit was much better than in recent years, which may have had something to do with reducing the amount of reading on the fly done by our defense.

We really only had one base defense throughout the year, which was always some form of a 4-3 over. The "over" refers to an over-shift of the line, meaning we shifted our defensive tackles one technique to the strength of the formation vs. the old school 4-3. Instead of playing right over the guards, they were at a 1- and a 3-technique.

Jauron's emphasis was on lining up and playing fast. In contrast to the 3-4 schemes of Rob Ryan under Eric Mangini, the defensive line did not read and react to the offense, but rather lined up in their gaps and got after it.

In our base defense, the defensive tackles always played at a 1-technique and a 3-technique with the 3-tech to the offensive passing strength (usually defined as the TE side).

The defensive ends played wider depending on TEs and our run fit on a given play. Much like the DTs, we would not flip ends depending on passing strength: defense's left to right, our line was always Sheard, Taylor, Rubin, Mitchell/Stevens.

While the line would not flip, the linebackers and safeties would. In this series of images, you can see the offense change it's strength through a shift and how our defense responds: 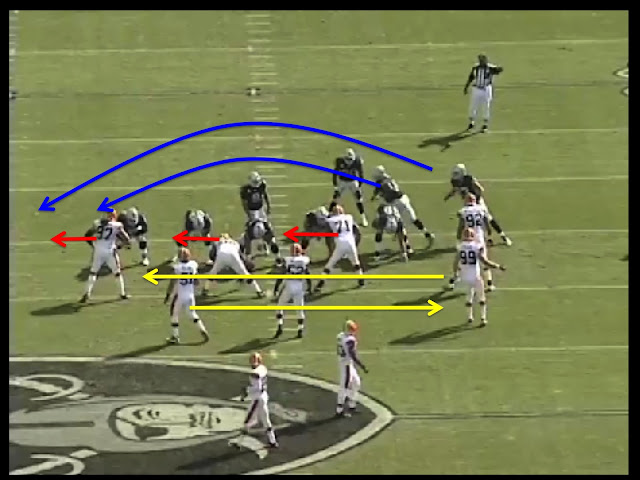 Notice here that TJ Ward and Mike Adams also shift, with Ward being the one who is responsible as the force man in the run fit (he plays the gap outside both TEs and forces the run back into the middle). 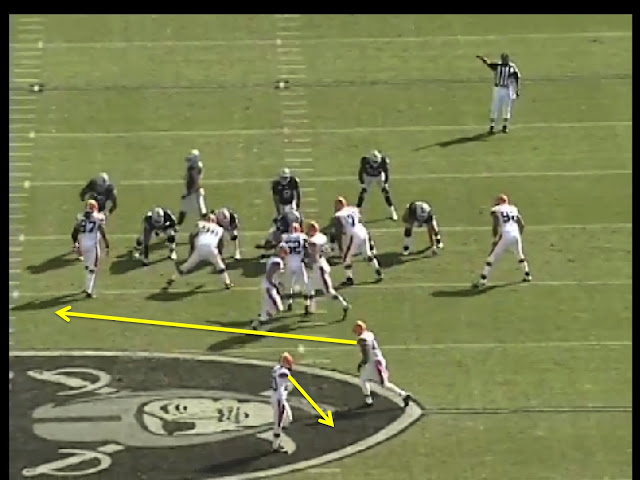 Here we are after the shift, with our line shifted and our linebackers flipped: 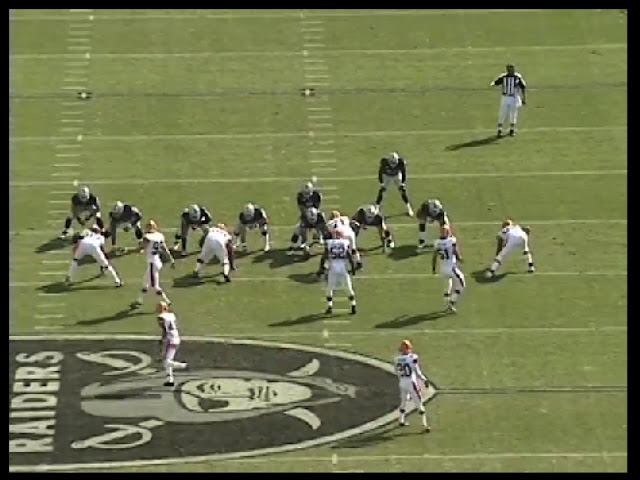 With two TEs to one side, the strong-side DE widened to a 9-technique and played the gap between tight ends as we can see in the photo directly above. With one TE to each side or one TE in the game we played differently. 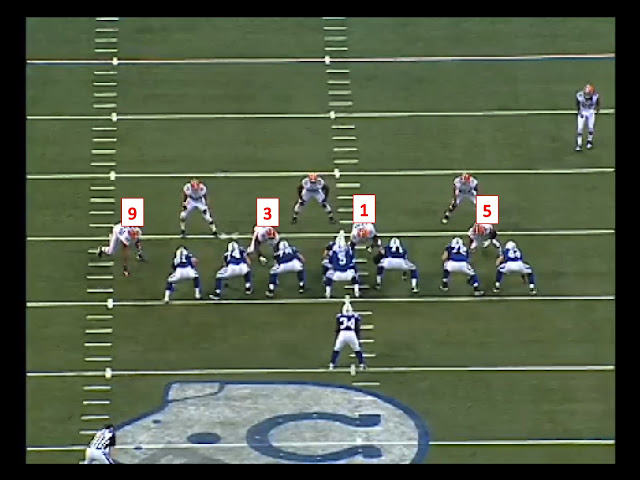 21 Personnel (1 TE)--sometimes the strong side end lined up head-up over the TE in a 6-tech here: 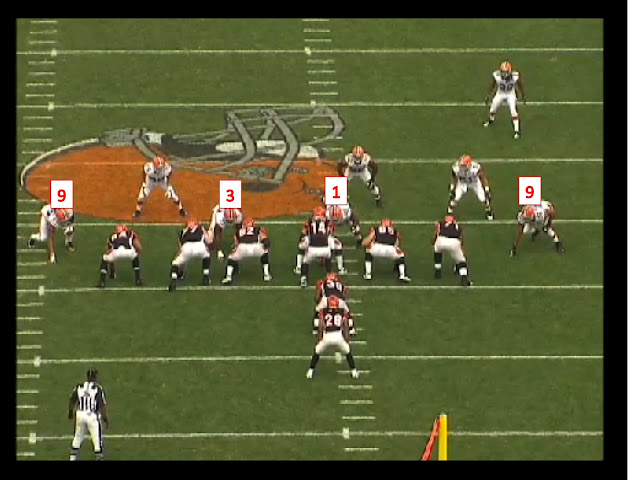 When there was no TE or a TE left to go in motion, the DE to that side would widen to a 9ish technique to be able to control the edge and rush the passer better. From F. Shurmur:

The pass rusher has to try to get to the edges or corner of the blockers as quickly as possible. The best way for him to do this is by alignment. The wider a rusher can align, the greater chances of being in position to work off the corner or edges of the pass protector. 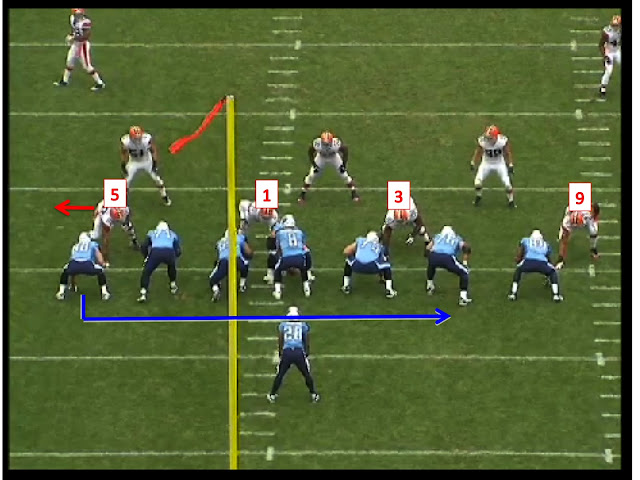 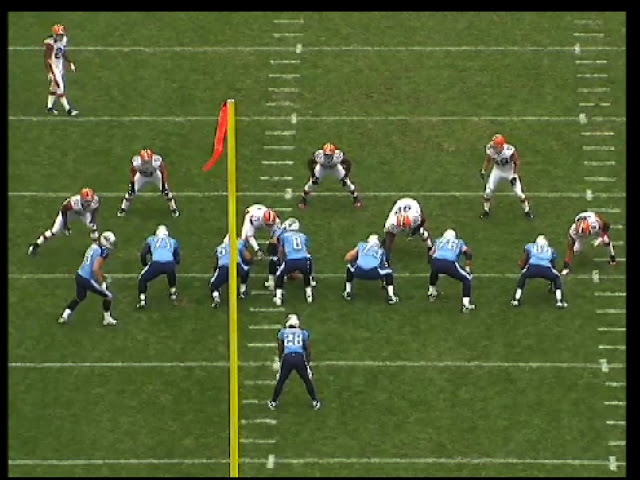 In this last image, you can see Scott Fujita calling for the safety to fill in on the 2 TE side as run support, which makes our front here exactly the same as in the Oakland game: 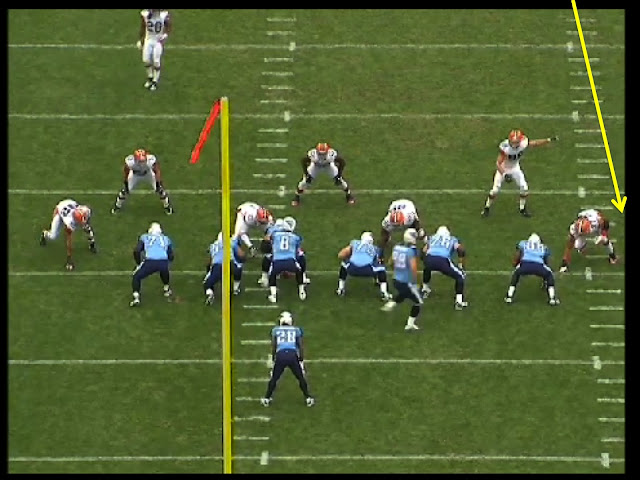 Jackson "hidden" behind the 1-tech: 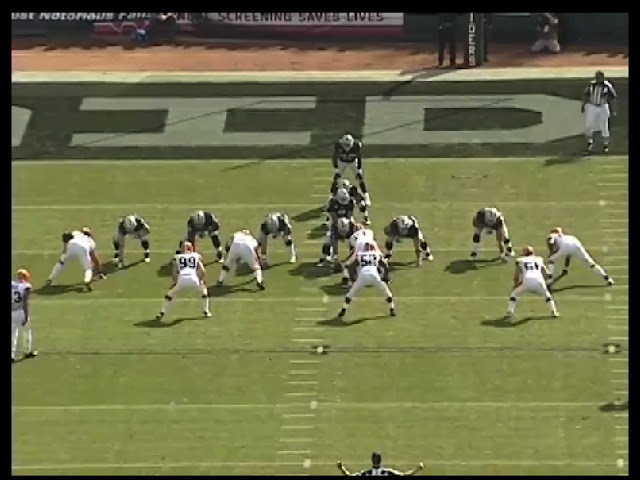 This is the front that our defense used in first and second down situations against 21 or 12 personnel between the 10-or-so yard lines. Our defense didn't do a whole lot to try to confuse offenses or show them things they'd never seen, we just had a way to deal with everything the offense was throwing at us, lined up, and got after it.

Next up, I'll review our run defense.