How Comfortable Can We Get With RB Montario Hardesty?

Share All sharing options for: How Comfortable Can We Get With RB Montario Hardesty?

It's still early, but the reviews are in: Montario Hardesty is a new player this year.

It has been a rough road for Hardesty. He missed his rookie season after suffering a torn ACL in the Browns' final preseason game. After the lockout ended last year, the coaches were taking things slowly with him. When Hardesty didn't see much action in one of the early practices in 2011, head coach Pat Shurmur was quoted as saying, "We want him to get used to carrying pads before getting him in there for all the reps."

Practice after practice, Hardesty would either be held out of practice or was "limited" in what he was allowed to do. Even after he had returned full speed to practice, Shurmur questioned whether he was mentally over his injury. Hardesty's load was expected to be light at the beginning of last season, until Brandon Jackson unexpectedly landed on injured reserve with a turf toe.

This year? The expectations, at least in the eyes of many fans, were low. The team drafted Trent Richardson. After being the darling of camp last year, Jackson was returning from injury. It was believed that a roster spot might come down to a side competition between Hardesty and second-year back Chris Ogbonnaya, who was second on the team in rushing yards a year ago. 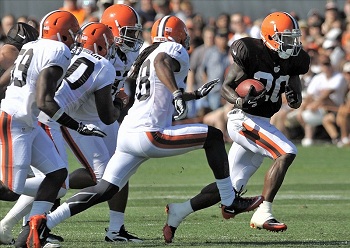 RB Montario Hardesty runs away from the defense during a training camp practice. The third-year back may finally be fully recovered from ACL surgery in his rookie year. Mandatory Credit: David Richard-US PRESSWIRE

If things ended today, I don't think there is much of a decision to make: Hardesty will be on the team's 53-man roster.

The media has seen Hardesty in camp for three years now, and everyone is pointing out how much quicker he looks. Part of that has to do with the fact that like several other players on the team, he lost a good amount of weight in the offseason. He began 2011 at 225 pounds, and now he's down to 215 pounds.

Another reason could be that it is often believed that a player needs two full years to get back to their peak potential after having ACL surgery. That's where Hardesty is at right now. Not only does he have the physical aspect down, but he's mentally prepared as well.

"I’m 100 percent; I just feel good," Hardesty said. "I don’t even think about the knee or anything like that. I just can go out and play football and not think about playing football. I think that’s what I was doing last year. I was thinking too much. I can just really go out, play the game and react, do things that I do. It’s just been fun getting back out there and playing."

Whereas Shurmur was a bit hesitant to tout Hardesty's abilities a year ago, he has noticed a difference as well:

"That’s as quick as I’ve seen him. Let’s let it play out here and see, but that was as good as I’ve seen Montario look."

Deep down in the back of everyone's minds, there will definitely be concerns about Hardesty relapsing and suffering another injury. It will be the same tentativeness everyone had last year about D'Qwell Jackson. There's a big difference between the two players' situations, though. Jackson was an everydown player who was critical to the heart of the defense. Even if he is on second on the depth chart ahead of Jackson, Hardesty will not see very many reps behind third overall pick Trent Richardson. Richardson is a workhorse, and that could play to Hardesty's favor in terms of durability.

Hardesty's roster spot isn't 100 percent safe yet, but I have revised my expectations for him due to the number of reps he has received, and how well he has been running in practice. Jackson is a good back to have around for his pass blocking and receiving, but Hardesty is the guy who can make sure the team doesn't miss a beat on the ground if Richardson needs a blow. Browns fans will have their fingers crossed in hoping that Hardesty remains healthy and ends up being the real deal.

What about you? Has your confidence in Hardesty already grown, or are you still reserving judgment on him?