The Browns were off on Day 5 of training camp, but they returned to practice Wednesday for their first afternoon session open to the public of the year. The story of Day 6 was the continuing maturity of the offense, as both Brandon Weeden and Colt McCoy performed well in red zone drills. The recap of what went down Wednesday afternoon is after the jump. 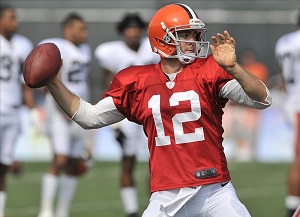 QB Colt McCoy has not looked dejected in training camp and had a solid practice on Wednesday. Mandatory Credit: David Richard-US PRESSWIRE