Brandon Weeden did some good things in his debut Friday night, but it wasn't all as easy as this 34 yard completion to Travis Benjamin. Weeden's play was not quite as bad as his 3 of 9 stat line would indicate, but he did make a few critical errors.

The first one I'll talk about was both an error by Weeden and rookie WR Josh Gordon. The Browns called a pass on 2nd down with 3 to go. We saw a "soft corner" over Gordon, who was running an out route on the left sideline. 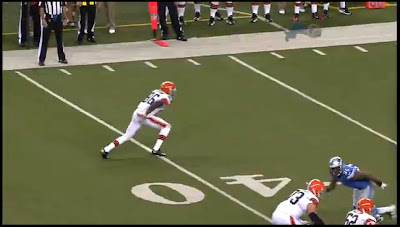 Gordon runs his stem but takes a peek over his inside shoulder for some reason and slows down. If he is going to break like he did, he needs to run through this CB and make him turn his hips and run. 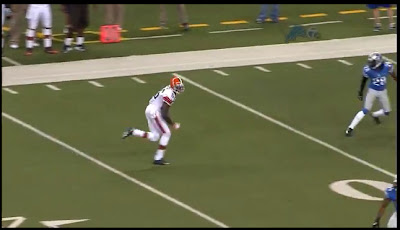 Gordon might doing this to try to fake the corner into thinking he is running a slant route but either way the corner is not fooled. Its never good when the DB is planting and breaking before your receiver as in the image above, and this could have been a pick-6 if he hangs on to the ball. 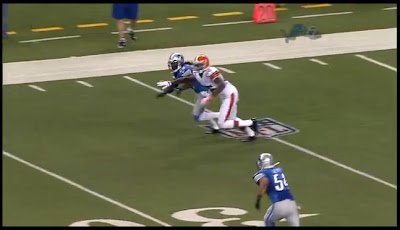 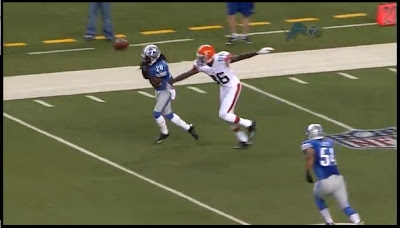 Gordon needs to either be able to drive the CB off, make him turn and run, and then make this kind of cut (likely against tighter coverage), OR make a "speed cut" where he rolls his route instead of breaking sharply against a soft corner. I don't have the Browns playbook, but my guess is that Gordon should have rounded his cut here. That "speed cut" is coached to get a WR to the spot he needs to be quicker than a true break when the WR doesn't need to break hard to gain separation. He already had separation here because the CB is playing off.

Details like this are important because our offense will consider this play "free yardage" just because of the corner's alignment. It should be an almost automatic 8 yards in a WCO. Weeden recognizes the coverage, and makes a good read to capitalize on the soft corner, but he has to be mature enough to hold on to the ball if the corners are biting like this. This is a situation where Weeden made the right read, delivered the right ball, did a nice job of timing the route with his delivery, but made the textbook play instead of "just playing" and holding the ball when the corner was jumping like that.

Corners too frequently bit on these types of breaking routes against us last year, and I hope that as the coaching staff sees this happening they will dial up more double moves to burn the defense deep during the regular season.

Here, Weeden makes another minor error where he has to be perfect. I am not entirely sure of the route concept called, but Travis Benjamin, Josh Gordon and Greg Little are running vertical stems while RB Montario Hardesty and TE Jordan Cameron are chipping the DEs and running routes into the flat: 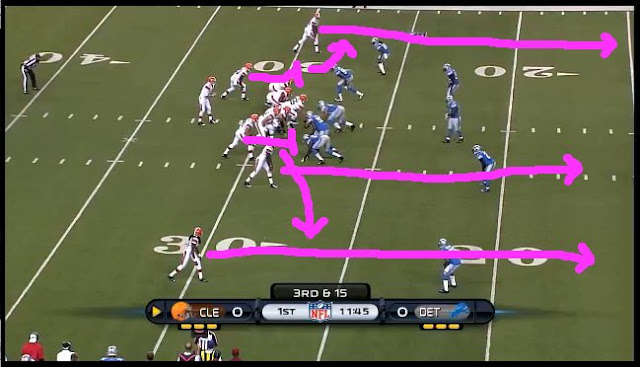 Weeden is on a 3 step drop from shotgun with a hitch. The protection isn't ideal, but it holds up through Weeden's drop. On that hitch step, the ball needs to be out or Weeden needs to be scrambling to buy time. As he hits his back foot and through his first hitch, you can see Weeden ready to deliver the ball to TE Jordan Cameron: 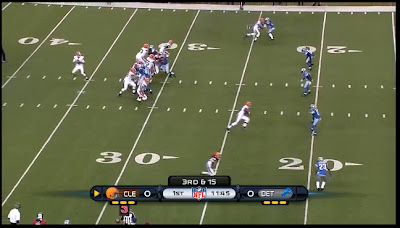 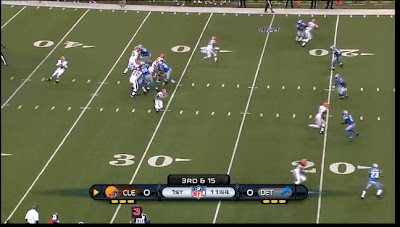 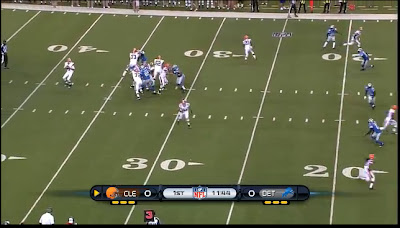 But Weeden waits for Cameron to whip his head around instead of throwing according to his footwork. If he catches the ball here, Cameron has a lot of room to run. Instead of delivering it on time or buying more time with his legs, Weeden waits and the rush gets to him: 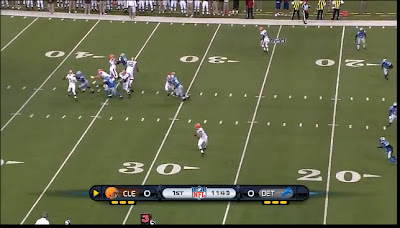 From the angle below you can see the extra hitch Weeden takes. You can also see RT Mitchell Schwartz expecting to hand off his rusher (pink arrow) to RG Shawn Lauvao and take his man (orange arrow) as he crashes down inside. Lauvao wants to stay locked on. Weeden is just hitting his plant here (blue arrow) 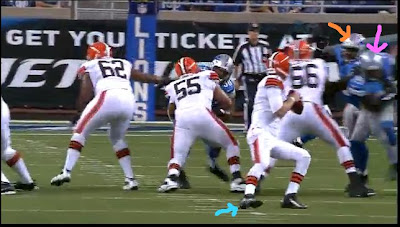 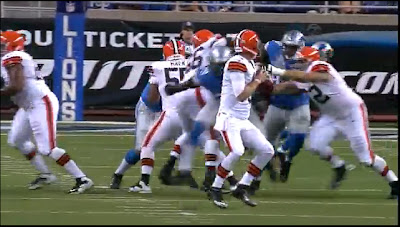 Above you see the first hitch, and the stunt of Schwartz's man and Lauvao's man becomes more apparent as they cross each other. Schwartz's man actually runs into Lauvao. 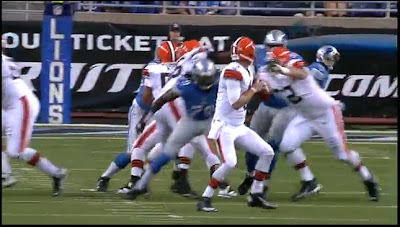 At this point, Weeden should be winding up and delivering the ball--remember, just one hitch here... 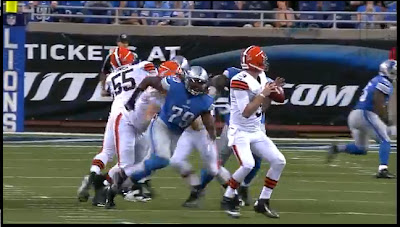 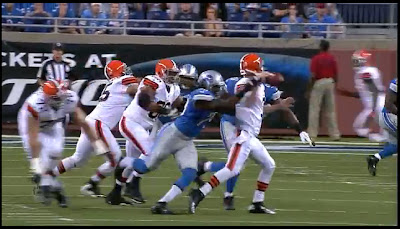 ...and gets hit during the delivery.

As the year goes on, Weeden will need to reduce these small errors, polish and refine his play, and continue to show his talent and make plays like the deep ball to Benjamin. It was only the first game of the preseason, so I wouldn't put too much stock in anyone's performance one way or the other, but it sure is nice to watch football games again.