The 2011 Cleveland Browns Defense: Vs the Run

Share All sharing options for: The 2011 Cleveland Browns Defense: Vs the Run

Our defense looked to stop the run by assigning one gap to each lineman and having our linebackers flow to the open gaps. Our linemen just have to see the snap and shoot into their gaps, and our linebackers just read the flow of the backs and flow to the ball. No complicated if-then algorithms, no two-gapping from our linemen, just line up and go; one player for every gap.

In most games last year, our run defense was good enough to keep us in games. There were times, however, when we just couldn't stop opposing teams from rushing the ball. I haven't charted the success rates of runs against us, but based on repeated observation of our struggles and the 1-game explosion of rushing that the Texans had, the hardest play for us to stop was the outside zone or "stretch" play.

Simply failing to be prepared

In this first play vs. the Texans, you are going to see a lot of things go wrong. First, you can see S Usama Young calling to S Mike Adams to come down into the box when the strength of the formation changes due to motion. The problem with this is that we often kept Adams away from the line to hide his lack of physicality. Instead of being versatile enough to trade responsibilities, our safeties usually flip flopped. 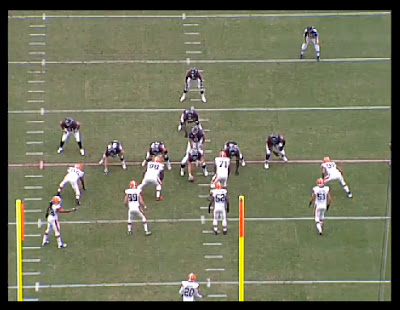 Note that by the time the ball snaps, Young is wildly out of position and the linebackers haven’t really shifted over to the left because they are unsure of where Young will be and what gaps everyone has. Our defense is designed to be simple to avoid these problems, and if we can’t do these simple things we can’t hope to defend the run. 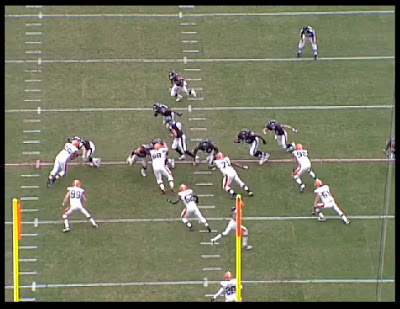 You can see this is zone-right immediately as all the Texans’ linemen step playside. The one exception is that the ROG is blocking down on Phil Taylor to double-team him momentarily so the OC overtake him.

As the ROG releases up to the second level, you can see the play developing playside; the guard will block Jackson, the Center will hold on for dear life against Taylor, the Tackle kicks Stephens out, and FB Lawrence Vickers is left to block Fujita. Gocong is late to the play, and Young is still trying to stop himself after getting quick-snapped. 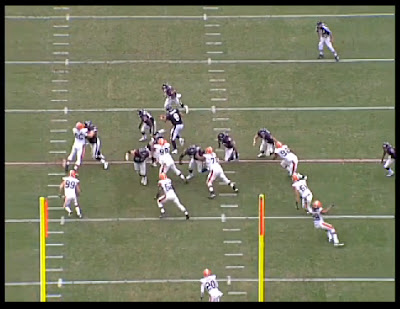 Stephens and Taylor actually do a very good job of squeezing the ball here. It is their job to keep the play inside (Stephens) and control the playside A gap (Taylor), not to fill up into the B and C gaps. Ideally, Taylor doesn’t get out-leveraged off of the snap and can be on the other side of the center, but when you can’t get there you have to try to throw the blocker into the gap. 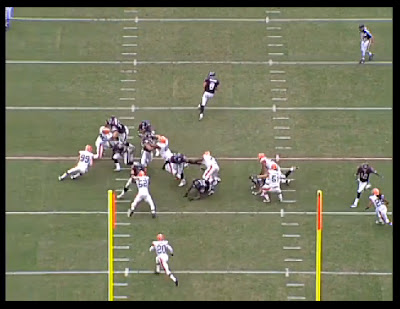 Note that as this play is being run to the defense’s left, the backside linemen are trying to cut the RDE and RDT. The zone runs try to pin those backside players in place and then spill the front side of the play wide, stretching the defensive line horizontally. Because Rubin and Mitchell get cut, even if Taylor is on the other side of center the back would have a giant cutback lane (and the LOG as a lead blocker). That’s what is so dangerous about the zone runs; you have to defend every gap aggressively but still play as a team.

These cut blocks are legal but you can’t cut anyone who is being engaged by another blocker. The block on Rubin here is borderline dirty and absolutely illegal. The other cut block on Mitchell is legal, and Gocong inexplicably runs himself into that block so the Texans get 2-for-1. So not only did they out-leverage us initially because of our failure to react to motion, they blocked two players with one man. When you make two mistakes in one play like that, it is hard to stop anyone. 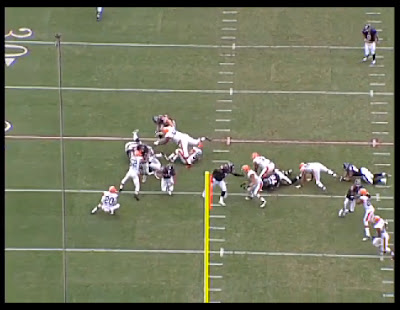 (we don't need to see the rest of that run)

One thing that will kill any zone run is penetration. Zone runs are based on the ability of the back to choose an open gap, make one cut (this is where the phrase "one cut runner" comes from) and "run to daylight." If you get a big ol' DL right in the back's face his lane options decrease significantly; there is a 300lb man blocking out the daylight.

As bad as we were against zone runs, we did have occasional success against them. Below, you will see Phil Taylor slice through a gap off of the snap and maul a lineman: 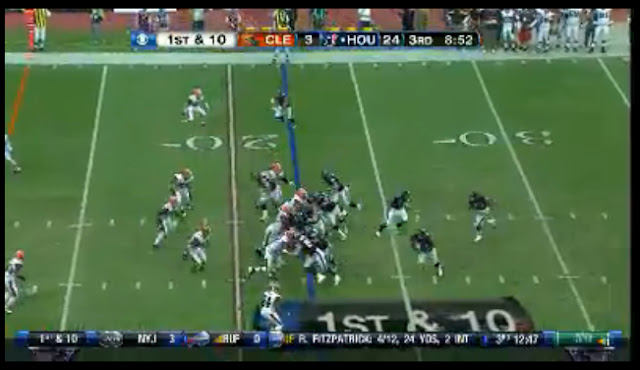 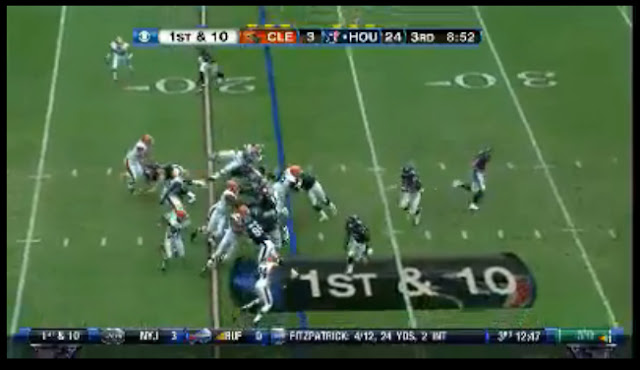 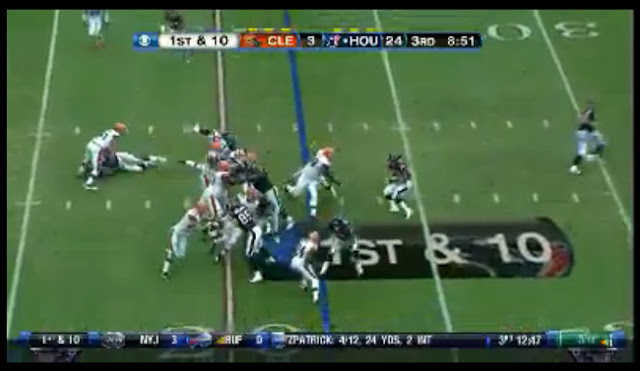 The RB is reading the playside line of scrimmage from the outside-in. If his blockers get him the edge, he is just going to run around everyone. If he sees one of our white uniforms on the edge of the line, he’ll look further and further inside until he sees a gap without a white jersey in it. At that point, he’ll stick his outside foot in the ground and explode through the open gap. At this point in the run, the back can see his gap developing. His FB will kick CB Sheldon Brown out, and the TE will seal LB Scott Fujita inside.

The problem? The 330lb man tearing through the backfield about to devour the back whole. Taylor forces a cutback that the back doesn’t want to make. This contains the back temporarily and allows our pursuit to make the play. 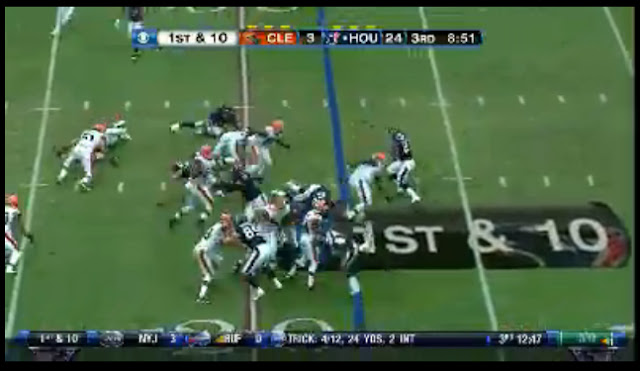 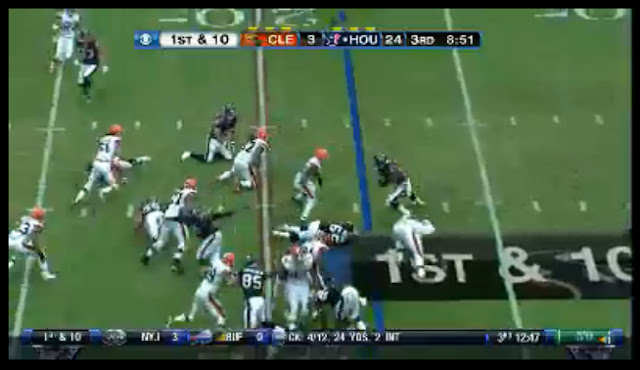 At this point in the run, note all of the Texans’ linemen on the ground and then the amount of players we have around the ball. That’s what our defense needs to succeed; get penetration from the line, get off blocks, and pursue the ball. I'll leave you with another play where we successfully stopped OS zone. Note the penetration: if we want to be successful stopping zone runs, we have to get our guys' helmets over that blue line. Also for you Lawrence Vickers fans out there, Scott Fujita has something to say to you: 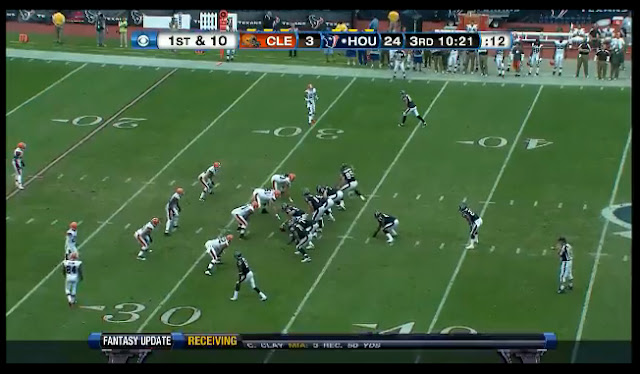 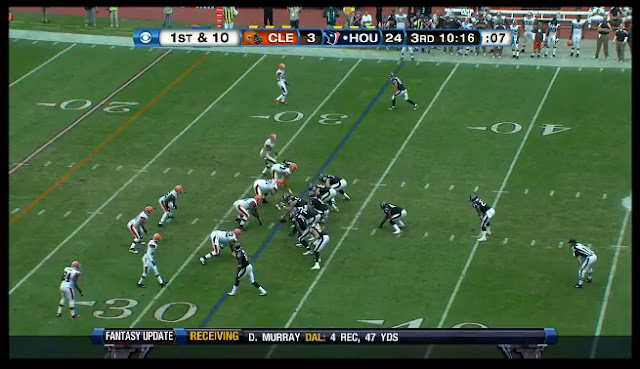 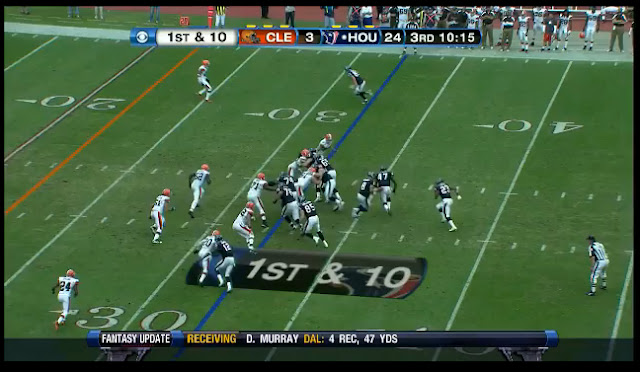 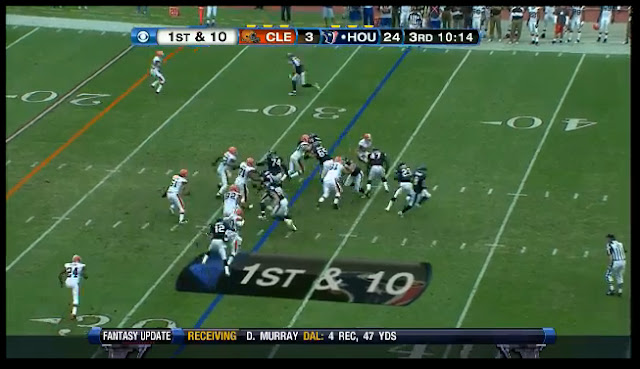 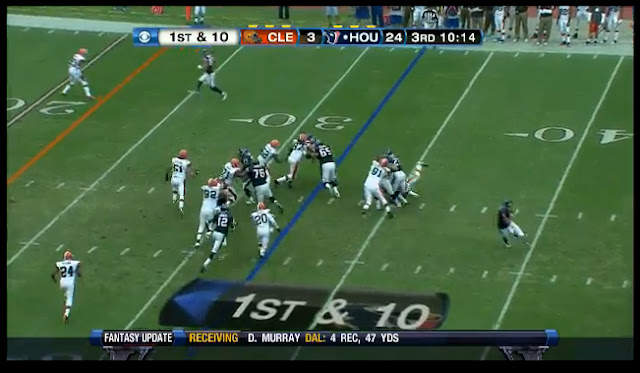 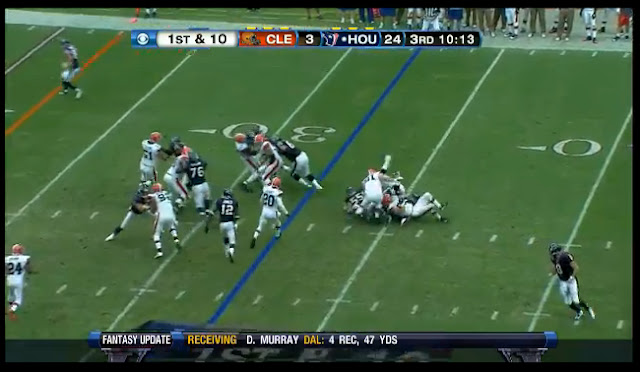 Next up: the Browns' Walkout OLB adjustment to their normal 4-3 Over front.