It looked like it would be a great night for the Cleveland Browns to showcase some of their young talent in front of the home crowd against the Philadelphia Eagles. With new owner Jimmy Haslam sitting in the Dawg Pound at the start of the game, Cleveland's offense got the ball first and Brandon Weeden looked sharp. The first play was a 28-yard connection with wide receiver Josh Gordon up the sideline. Weeden's next three passes included a 20-yard hookup with tight end Alex Smith, and a 12- and 6-yard completion to wide receiver Mohamed Massaquoi.

Cleveland had the ball two yards away from the end zone, and that is when things fell apart for the first stringers. A holding penalty set the ball back ten yards, and then poor blocking on a screen pass resulted in a fumble by Weeden that was recovered by the Eagles.

Two drives later, backed up in their own territory, running back Montario Hardesty fumbled. Eagles rookie quarterback Nick Foles, making the start in place of the injured Michael Vick, found tight end Brent Celek on a 7-yard touchdown pass three plays later. The Browns went three-and-out on their next drive, and a free rusher was able to block Reggie Hodges' punt. The Eagles recovered at the 14-yard line, and Foles got another touchdown pass two plays later to give the Eagles a 14-0 lead. 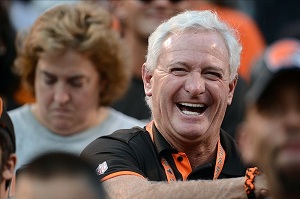 Team owner Jimmy Haslam III was in the
Dawg Pound at the start of the game.
Mandatory Credit: Eric P. Mull-USPRESSWIRE

Things didn't get better on Cleveland's next drive, as Weeden was hit hard on third down again for a sack. The Eagles started with good field position again and were able to kick a 41-yard field goal to go ahead 17-0. With the help of a penalty, the Browns were able to put together a decent drive under Weeden on their next possession, but they still had to settle for a 33-yard field goal by Phil Dawson. Cleveland went into the half down 17-3.

At the beginning of the second half, it looked like things might turn out brighter for Cleveland. With pressure coming in the face of Trent Edwards, safety David Sims had another pick six. The play was called back due to a poor call by the officials, as they flagged linebacker James-Michael Johnson for unnecessary roughness on Edwards. The Eagles put together a lengthy drive and almost lost the football down near the goal line, but the Eagles got back on top of the football and were able to score a touchdown on a screen pass to take a 24-3 lead.

Backup quarterback Colt McCoy then got his first real shot of the night for the Browns and put together a lengthy drive of his own that carried over into the fourth quarter, which ended on a 3-yard touchdown pass to tight end Evan Moore, cutting the deficit to 14 points at 24-10 Eagles.

After the Browns forced the Eagles to punt, Seneca Wallace entered the game for Browns and promptly threw an interception on his first pass. The Eagles tacked on a field goal to make it 27-10, and that is all she wrote.

I will have my full game review of the game up on Saturday or Sunday. Here are some quick stat highlights:

LB L.J. Fort led the way defensively with six tackles, and S David Sims had five tackles for the Browns.

The Browns had a rough night against the Eagles, dropping to 2-1 in the preseason. Cuts to 75 players are due Monday, and the team's final preseason game is Thursday against the Chicago Bears.