The Official Dawgs By Nature Fantasy Football league held its draft this past Saturday, and only two of the twelve participants were not able to be present. Whose team turned out to be the best? Take a look at everyone's rosters after the jump.

Each of the competitor's teams, in no particular order, are listed below: 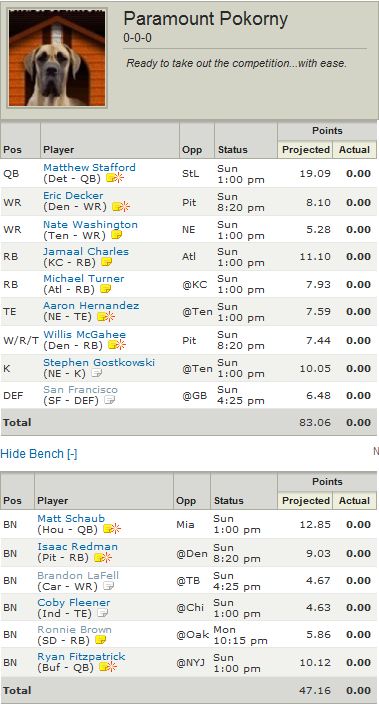 Pokorny Review: I ended up having the 12th pick in the draft, which was not an ideal spot for me. I came away comfortable with my picks at running back and quarterback. I am a firm believer that Jamaal Charles is rated too low due to his injury last year, and that the Chiefs will have a nice one-two punch with him and Hillis. I wanted to target a few players from Denver too because I felt Peyton Manning's supporting cast would be undervalued. I was very pleased to see Eric Decker on the receiving end of two Manning touchdowns in their third preseason game. I feel like my strongest position is at quarterback, so if someone else is in need of one during the year, maybe I can improve upon my wide receiver situation. 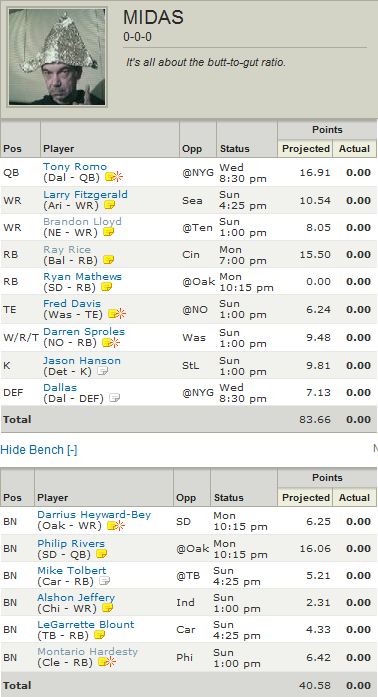 Pokorny Review: I try to stay away from Tony Romo in fantasy football because he has too many turnover/"WTF" type of games that will net zero points, and Philip Rivers had some consistency issues a year ago too. After Larry Fitzgerald, the receiver situation is a little thin -- after Wes Welker and the tight ends, I consider Brandon Lloyd the fourth wheel. The strength of this team is definitely at running back, where Ray Rice and Ryan Mathews can really do some damage later in the season. Darren Sproles is a great option for the flex position too. 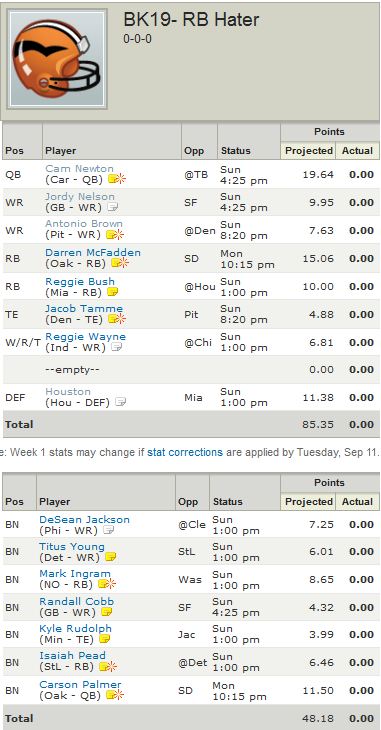 Pokorny Review: Who needs a kicker? Not Bernie19Kosar, apparently. I like the way this team is built -- there are some nice core players in Cam Newton, Jordy Nelson, and Darren McGadden. Then, there are four intriguing wide receiver prospects. Antonio Brown, as much as I hate to say it, should be a bigger star than Mike Wallace for the Steelers. DeSean Jackson is a good rebound candidate. Titus Young could emerge. Reggie Wayne could break out again with Andrew Luck. The running back depth is a bit shaky, but the wide receiver strength makes up for it. Houston's defense also has some great matchups this year with how weak their division rivals are. 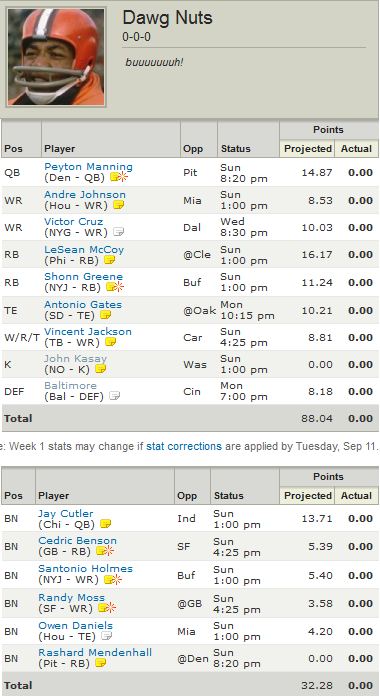 Pokorny Review: In my money league, I was able to get Peyton Manning in round 9 as my backup, which was a bargain. If he falters, Dawg Nuts' team will be hurt, because I never like Jay Cutler has a fantasy option. The top two receivers, Andre Johnson and Victor Cruz, are great finds. The top running back option, LeSean McCoy, is solid too. I question the depth a little if something happens to any of those guys, though. I think Baltimore's defense will suffer without Terrell Suggs. 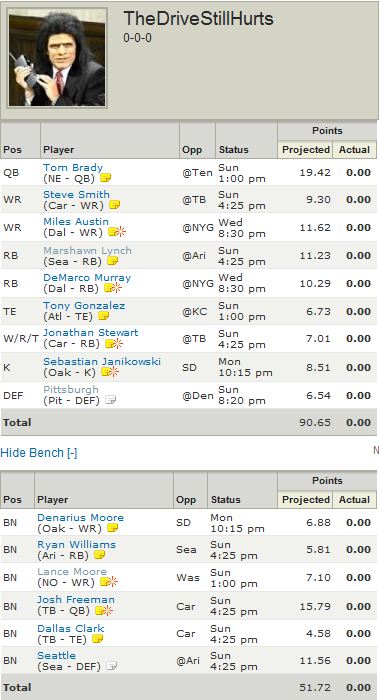 Pokorny Review: This is the price you pay for not attending the draft. Tom Brady is fine, but I see a lot of question marks after that. There really is not a dominant running back to speak of, as I could easily see DeMarco Murray not being able to live up to the hype. Miles Austin was big news...two years ago. This team is going to crash and burn. 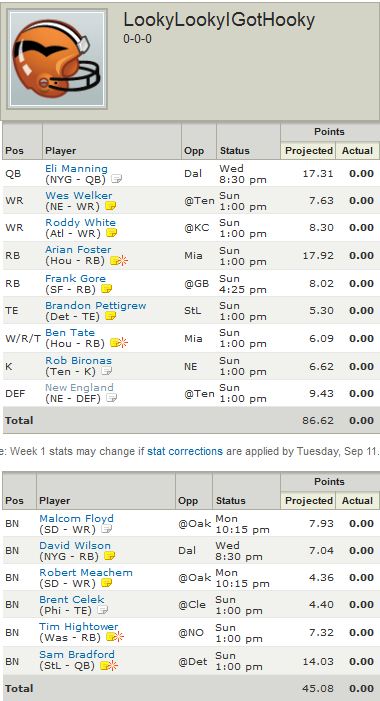 Pokorny Review: I feel like one half of the equation is filled at running back with Arian Foster. The penalty of having the first overall pick is having to wait awhile for your next stab at a couple of picks. The other half at running back, Frank Gore, is part of too large of a stable of backs for my liking. I like to see three starting backs on a roster, and rufio only has two. Roddy White and Wes Welker are solid top two receivers. Eli Manning is an elite quarterback in terms of play, but not in terms of fantasy football. Mediocrity with this team. 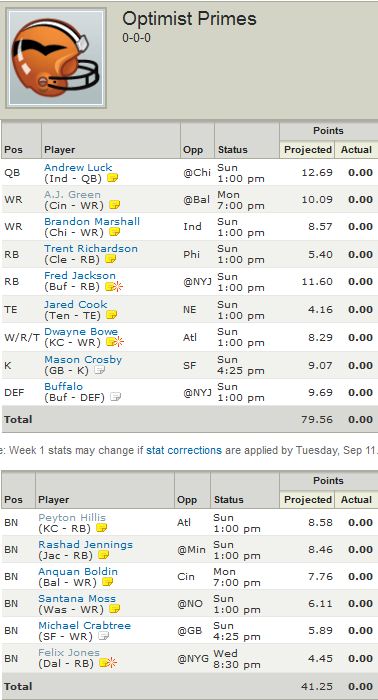 Pokorny Review: You'd have to be really optimistic to make a case for this team doing anything positive during the fantasy season. Andrew Luck as your starting and only quarterback? We also have our resident Cleveland Browns fan here, with Trent Richardson and former Brown Peyton Hillis being drafted. The tight end situation isn't the greatest. I don't like Brandon Marshall as a fantasy option, even if he is re-united with Cutler. Across the board, the starters and the backups are "meh." I'd give him an "F." 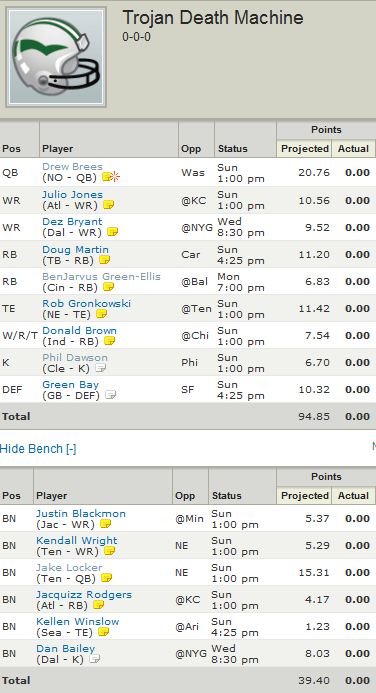 Pokorny Review: (Nods head in approval) This is a team that has a lot of potential, and we should find out early in the season if troy is a top contender. He has the big time players in Drew Brees, Rob Gronkowski, and Julio Jones. Running back might look shaky, but Doug Martin, BenJarvus Green-Ellis, and Donald Brown should all start. If at least two of them put up some pretty good numbers weekly, that's a lot of points. He also snagged two top rookie receivers, Justin Blackmon and Kendall Wright. Not bad. 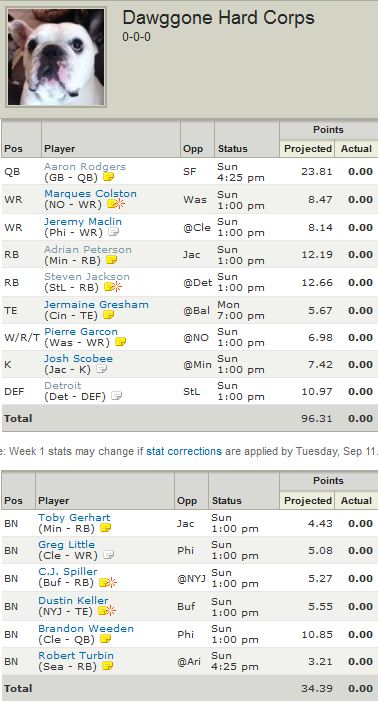 Pokorny Review: By virtue of getting Aaron Rodgers, this team can contend on any given week, even if the rest of the team sucks (not saying it does). Adrian Peterson and Steven Jackson would have been a nice combination a few years ago, but the jury is still out on those two picks. We'll have to see if they can stay healthy. Marques Colston is a good top option at wide receiver, but I think Pierre Garcon is overrated and Jeremy Maclin will drop off. We have another resident Browns fan here with Greg Little and Brandon Weeden on the bench..."just in case." 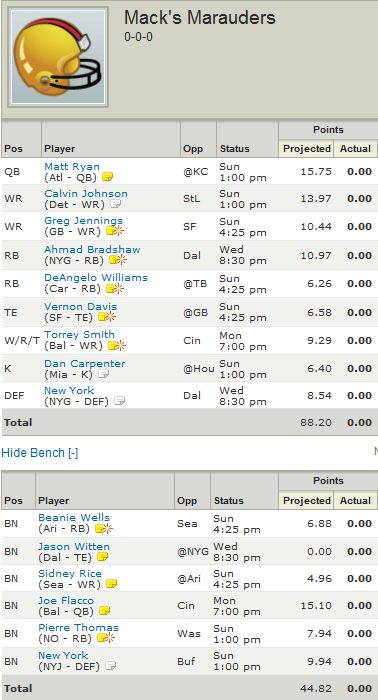 Pokorny Review: Thank god I'm not stuck with this running back situation. I don't want to pray on gameday about who will get the most touches at running back for Carolina, Arizona, or New Orleans. Even the Giants can be thrown into that mix. Calvin Johnson, Greg Jennings, and Torrey Smith are a nice trio of receivers, but I don't know if they are enough to carry this team. 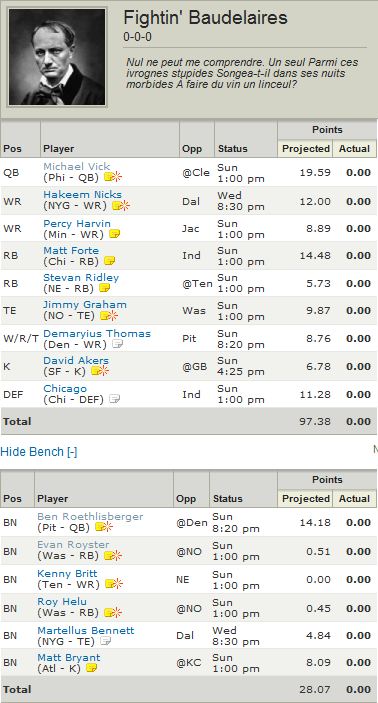 Pokorny Review: Les Fleurs was another victim of autodraft. It's funny how Michael Vick was often a No. 1 overall pick last year around fantasy football, and now he's fallen to the point where you don't even consider him a big-time fantasy threat. Ben Roethlisberger as the backup can't feel too good either -- what Browns fan wants to start and root for him to do well? In Chicago, Matt Forte is in for a reduced workload. Who knows who the Patriots will settle on at running back throughout the season. I like Demaryius Thomas and Evan Royster as sleeper picks, but sleeper picks aren't enough. Jimmy Graham at tight end is the only saving grace. As much as I hate this team, he does have the highest "projected total" of points, at least for Week 1. We'll see. 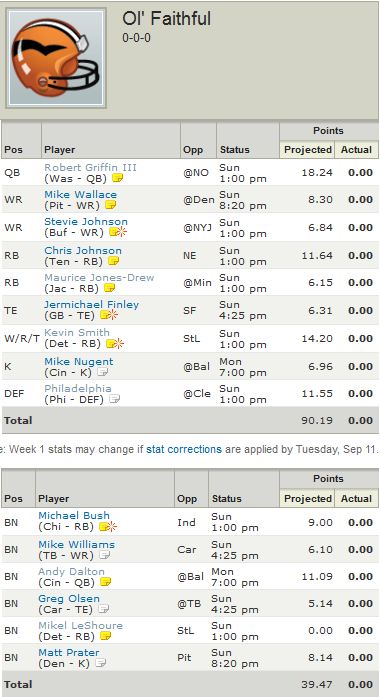 Pokorny Review: This is a team that drew a lot of flak during the draft. I can't believe two teams in the league are making Luck, and in this case, Robert Griffin III, their starting and only quarterback. I stayed as far away from Chris Johnson as I possibly could. If he was ever auto-drafted to my team, I'd cut him outright (...not really, but I'd feel like it). It's a bit risky taking two players who were in an extended holdout (Mike Wallace and Maurice-Jones Drew).

Please vote in the poll below on whose team you feel is the strongest. Let us know in the comments section too! And, to the league participants, feel free to engage in some trash talk. Don't mind some of my insults above -- it's all part of the game.

Yahoo! Fantasy Football supports SBNation.com and fantasy league families everywhere. In addition to the great drafting, trading, scoring and research that makes it the #1 free fantasy football game, this season also features a brand new mobile app and Pro Leagues, where you can compete for cash! Get ready for kickoff by signing up now!