The Cleveland Browns will be a young football team in 2012. We are going to start a bevy of young players and with all of the promise and talent they bring, they will also bring a lack of experience.

Even with a full offseason it's simply quite hard to get reps against every formation and every play you'll ever see in every situation (down and distance, time left, etc.). Because of that, units like an offensive line, linebacking corps, or receiving corps can take months or even years to gel with their teammates.

James Michael Johnson's performance in the Eagles game was a microcosm of our team so far in these meaningless preseason games: he demonstrated both his talent and his lack of experience.

In the 1st quarter, the Eagles had the ball down near our goal line. We were in normal 43 personnel to counter the Eagles' 21 personnel. We were running a form of Cover-1 (man), with two exceptions that we'll talk about later. The first is the MLB D'Qwell Jackson playing as a "rat in the hole." Additionally, Joe Haden and Eric Hagg have a "slice" concept on the slot receiver. Again, more on these later. 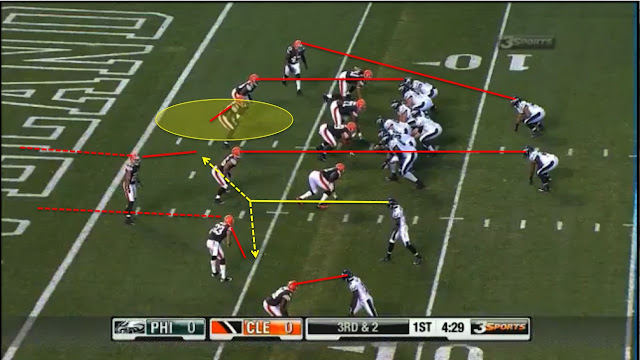 On this play, JMJ is responsible for covering TE Brent Celek, who stays in to block. There are various assignments a defender can have when their assignment stays in the protection, but it appears that Johnson drops into a short zone. 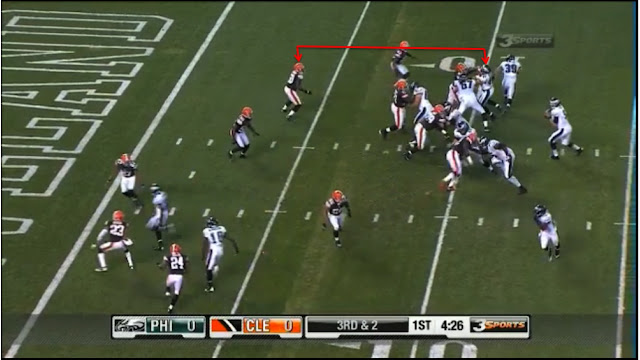 After a short time both linebackers in zone (Jackson, and now Johnson) go after the quarterback. It makes sense for Jackson, who has no man responsibility to go after QB Nick Foles to contain him as he begins to scramble. But the rest of the coverage is counting on James-Michael Johnson to account for Celek. 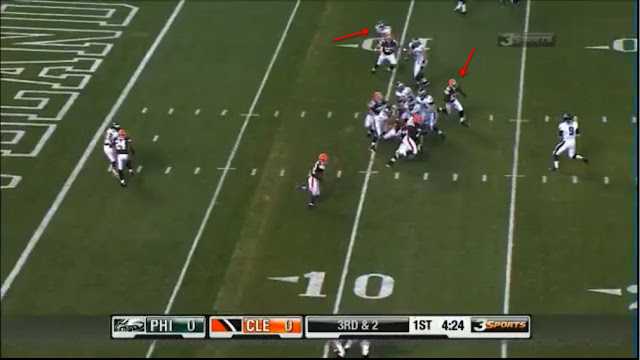 As Johnson runs after Foles, Celek leaves the protection and catches a pass. No one else has accounted for Celek. 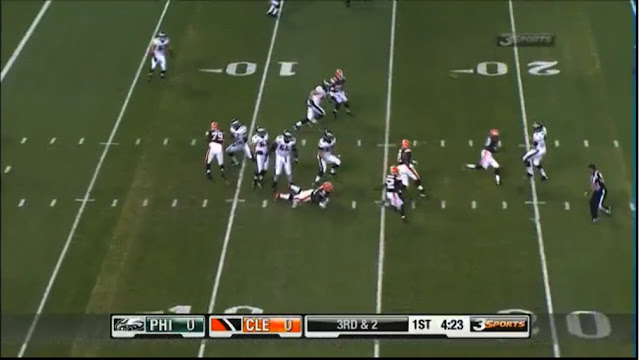 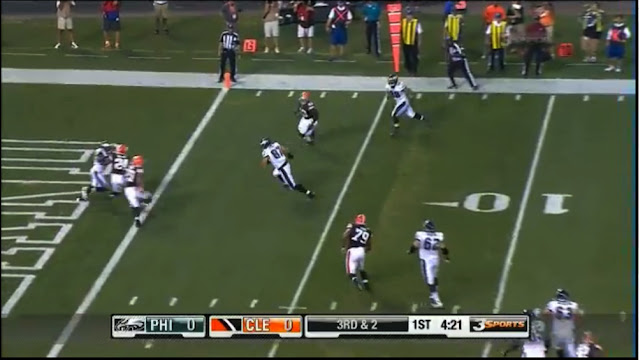 FS Eric Hagg comes flying in from his zone and nearly makes the tackle, but is apparently bumped off of Celek by CB Sheldon Brown. This is a key situation where JMJ must execute his assignment and play his part in coverage. Instead, no one has accounted for Celek and the Eagles score easily. 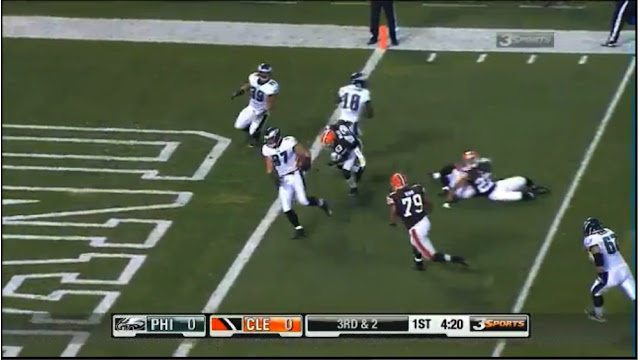 On another trip to the red zone, we were again in normal 43 personnel to counter 12 personnel by the Eagles. We ran the same exact coverage: Cover 1, "rat in the hole", "slice" on the slot. 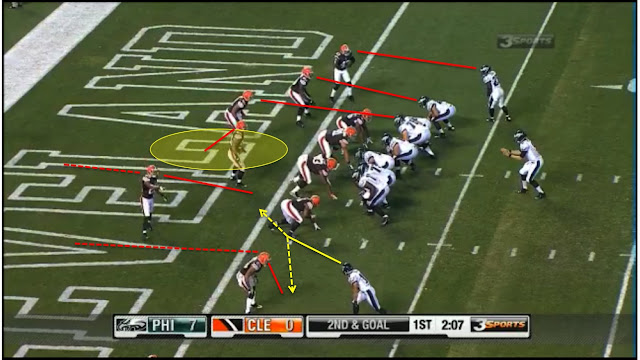 Though we will have favorite coverages down by the red zone, I do not expect us to be exactly this predictable. Let's go back to those two tweaks to our Cover-1 defense:

Rat in the hole

Teams call this a "rat in the hole," or "funnel" concept. Basically any short, inward release by the TE breaks this coverage (or more accurately, our run fit). To deal with inside releases, teams make a call: If the TE goes inside, the person covering him passes him to the "rat in the hole" (the zone defender) and then becomes the new zone defender/rat: 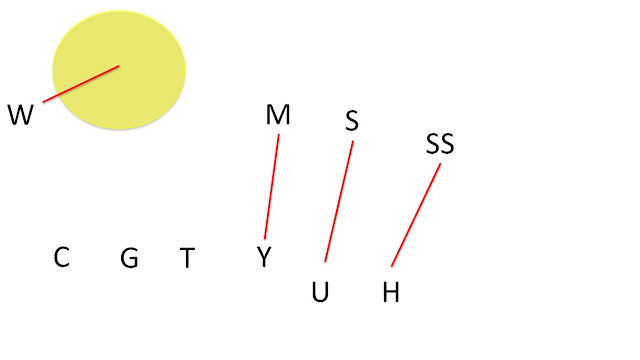 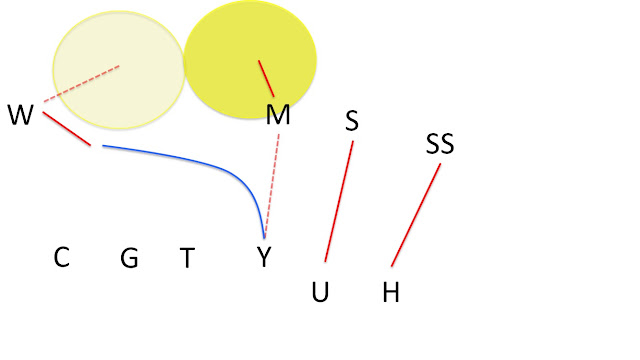 This coverage has been around since at least Buddy Ryan's heyday, and is useful for taking away one threat from the opposing offense. Bernie Kosar said during the broadcast that not a lot of teams run this concept, but regardless of popularity we ran it here twice.

Basically, Haden has outside leverage on the slot receiver and he's funneling him inside to Hagg. If the receiver breaks out, Haden stays with him man to man and Hagg zones off. If the receiver breaks inside, Hagg will cut under the route and take him man to man, with Haden zoning off. This is close to the "rat" concept (especially in the compressed space of the end zone) except it is 2 on 1 instead of 4 on 3. 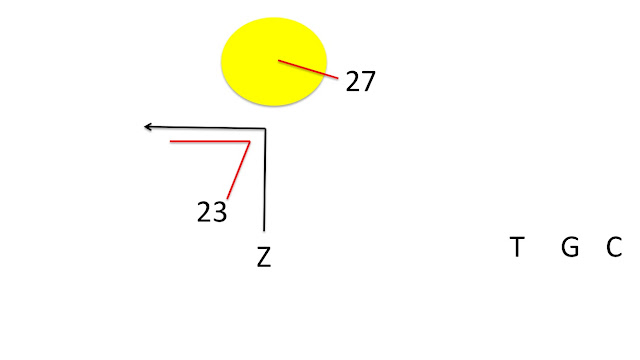 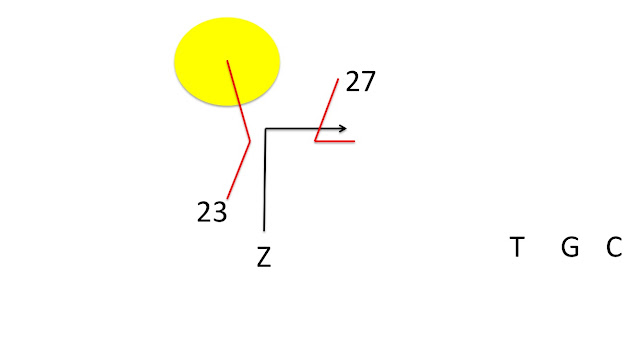 On this second trip to the red zone, the Eagles are running a "follow" concept from a bunch trips set, similar to this:

With Hagg inside to the right, the rat is free to concentrate on crossers coming from the left. Here you can see Maiava (the "rat") turning left and ready to cut the TE's crossing route. The other TE pushes vertical, taking LJ Fort with him man to man. TJ Ward maintains his outside leverage on the back as he goes into the flat. 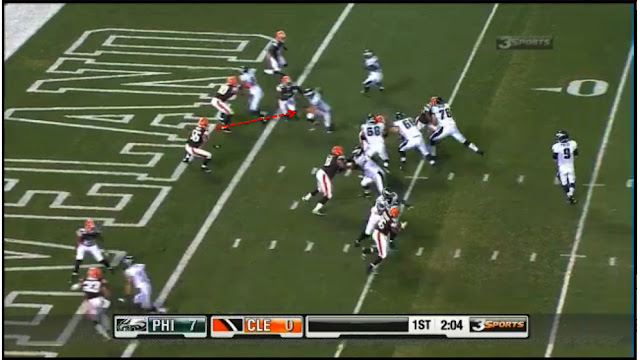 As the TE crosses, Maiava bodies him up. Ward has good outside leverage on the back and is funneling him inside. At this point Johnson should release the TE and become the new rat, see the back cutting inside, and light him up when the ball is thrown. Instead, Johnson does not release the TE in time, and Ward is now funnelling the back into help that isn't there. 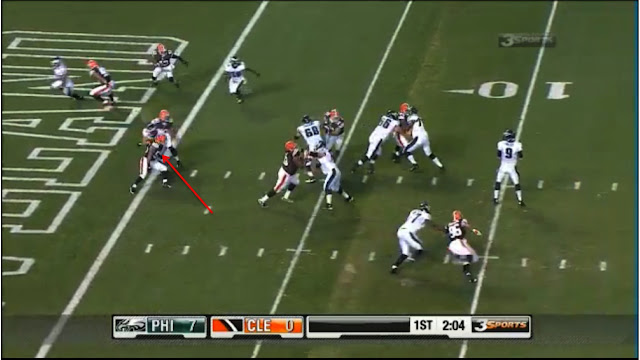 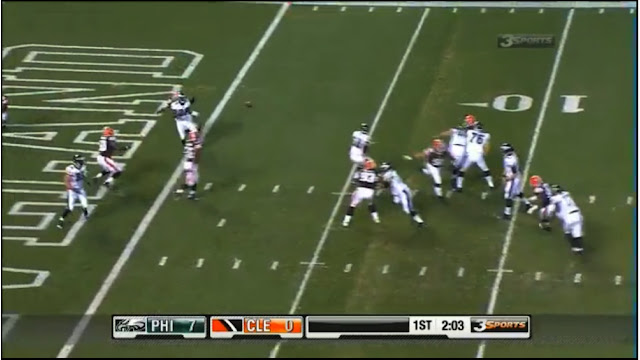 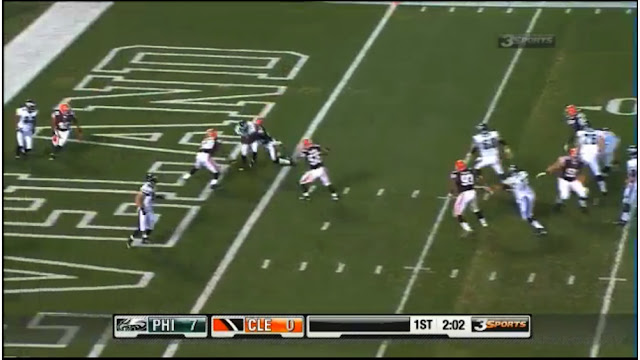 While Johnson might not be as mentally prepared as he needs to be, he has the talent to become an upgrade at linebacker if he can put it all together. One play that demonstrated this was his pass breakup midway through the 2nd quarter. 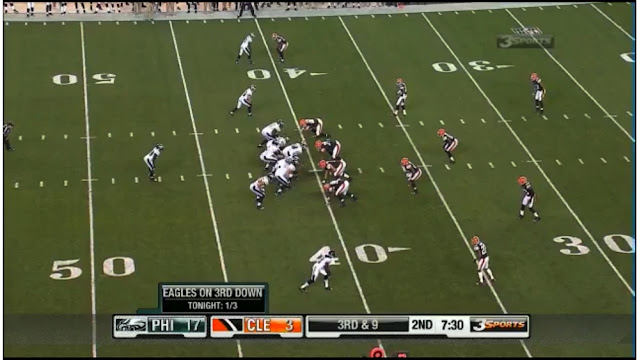 We played Cover 2 zone with JMJ as the "Tampa-2" middle linebacker responsible for dropping deep in the seam. On the snap, the Eagles ran play action, freezing the linebackers. Johnson is sucked up a few yards into his run responsibility, and immediately upon seeing Foles with the ball he begins to bail out: 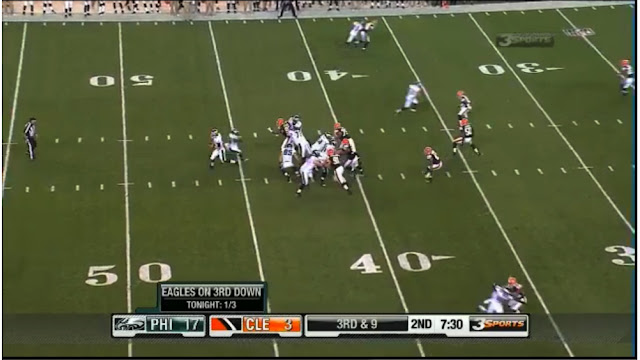 With the TE cutting across the back of the formation for the run fake, the only vertical threat Johnson has to cover into that deep "Tampa-2" zone is the slot WR to his right. Before Foles can even fully carry out his fake, Johnson is already dropping and has his eyes on the slot WR: 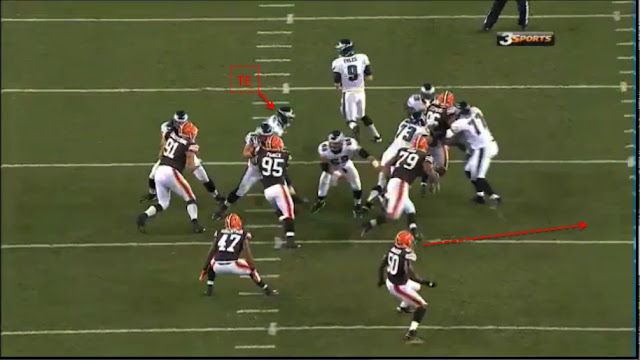 Johnson has to flip his hips and run with the WR, who is already deep: 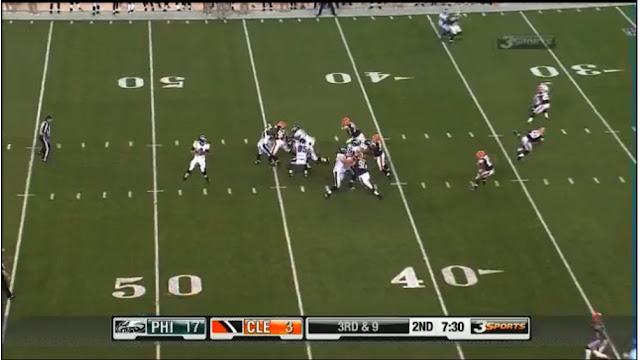 The safeties are being held wide by deep routes by the outside WRs, and have to wait to break on the ball. Johnson is ideally closer to the WR, but this is a good example of how defenders with the proper leverage can be effective without being perfect. 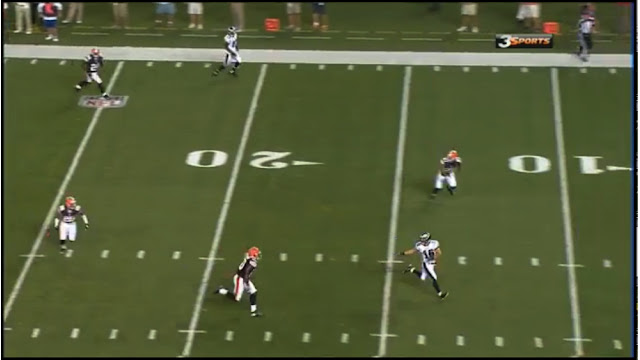 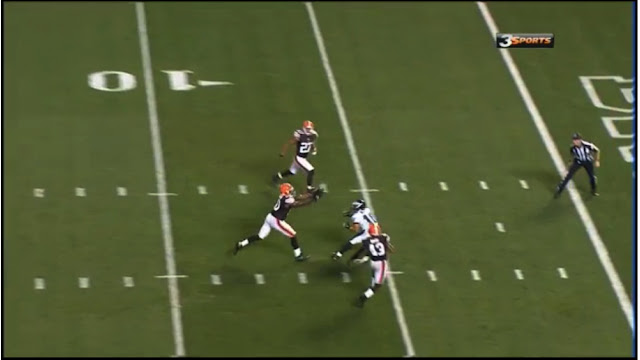 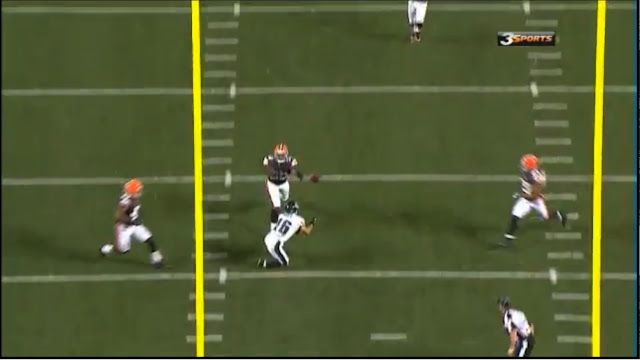 Johnson displays nice athleticism, closes on the receiver and breaks up the pass. If Johnson can continue make these kinds of plays and limit his mental gaffes he can be an above average starter in the NFL. Our success this season will likely depend on whether our young players like Johnson more frequently display their talent or their inexperience.