I was one of those fans in attendance, and while I appreciate the opportunity visit the stadium (for free) to see the Browns practice, compared to the previous years I have been there, I found it to be somewhat of a letdown in terms of excitement. Part of that might have had to do with the fact that just before I left home to head downtown, I had learned about Trent Richardson's surgery and Joe Haden's possible suspension. My recap of the event is after the jump. 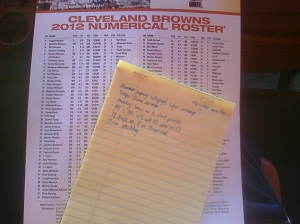 The early stages of the four pages of notes I scribbled, along with all of the players' jersey numbers available. 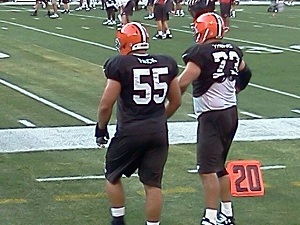 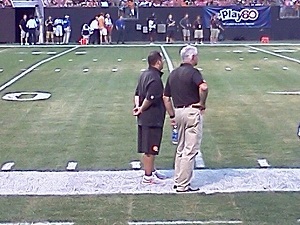 Please note that there could be a lot of errors in the reports above. I try to write down player jersey numbers as quick as possible while jotting notes too, but the action moves quick at times.

Hope you enjoyed. The Browns' first preseason game is Friday against the Lions. Word of advice to the Browns' organization in the future: don't schedule the stadium practice right before a preseason game. Make it so practice can be 2.5 hours in full pads, just like it is in Berea.