The Sunday Five: Preparing for Life Without Haden, and Improving the Offensive Line

Share All sharing options for: The Sunday Five: Preparing for Life Without Haden, and Improving the Offensive Line

In today's edition of "The Sunday Five," we talk about the Browns' situation at cornerback, two keys for the offensive line to improve this week, how the offense needs to take advantage of great field position, why Montario Hardesty should be inactive for Week 2, and a few other nuggets to cap off your pre-game digest.

The Browns are going to be without CB Joe Haden against the Bengals today as he begins serving his four-game suspension. When the Bengals have two receiver sets, Cleveland will opt to go with Sheldon Brown and Dimitri Patterson. In nickel packages, second-year man Buster Skrine will come in to play the outside, with Patterson going inside to cover the slot. One thing you have to moderately be concerned with heading into this game is the uncertainty of Sheldon Brown's health.

Brown is a warrior when it comes to suiting up on gameday, but he suffered a shoulder injury/neck stinger in Week 1 against the Eagles and had to leave the game. He was a full participant in practice all week, which would seem to point in a positive direction. Whether that limits his ability on gameday still remains to be seen. Rookie cornerback Trevin Wade is expected to be active after a strong preseason and should see some action in four-receiver sets. If anything happens to Brown, Wade received a lot of reps with the first-team defense during the preseason as the nickel corner. We could see a combination of Patterson and Skrine on the outside, with Wade in the slot.

Before the season started, I cited the Browns as having one of the best offensive lines in the division, and possibly in the AFC. In terms of potential, I still think they are right up there. In terms of their play on gameday, the unit still has a lot of room to improve. With that said, maybe their play is not as bad as it looks. Including the preseason, we have seen Cleveland's starting offensive line struggle twice: both times were against Philadelphia. In the latter game last week, the pass blocking improved, but the run blocking was still very shaky.

There are two keys I have for the offensive line in general this week, and one of them involves Brandon Weeden helping his guys out. On the play where Joe Thomas gave up a sack to Trent Cole last week, I think you could almost pin that one on Weeden. If you look in the photo below, Weeden is about ten yards behind the line of scrimmage with a ton of space to step up in the pocket in front of him. Granted, his decision is made early to attempt to heave the ball up the right sideline, but I think an adjustment can be made somewhere here without faulting Thomas too much. The second key is for the Browns to improve their run blocking out in space. I believe the team ran one pitch play last week, and we saw Trent Richardson put on a good move in the backfield to dodge one defender. Unfortunately, Alex Mack and Mitchell Schwartz could not drive on their guys very well, leading to a minimal gain. 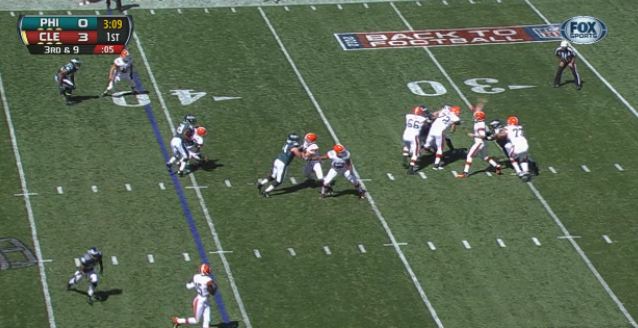 3. A poor offensive showing for the second week in a row will do a lot of damage to the credibility of Tom Heckert's top two draft picks. It won't necessarily be warranted long-term criticism, but the short-team criticism will be at an all-time high. Last week, the offense was handed a dream scenario. Take a look at where their drives started (there were 15 of them):

It's time for me to predict the gameday inactives for the Browns vs. Bengals game today. Things are a bit different this week with the return of Scott Fujita and the suspension of Joe Haden. Here are my seven projections for the Browns' Week 2 gameday inactives: QB Thaddeus Lewis, RB Montario Hardesty, WR Jordan Norwood, OT Oniel Cousins, LB James-Michael Johnson, LB Tank Carder, and S Ray Ventrone. It basically shapes up as the same inactives as last week, with Carder being inactive in favor of Fujita, and Ventrone being inactive due to his hand injury. After being inactive a week ago, Usama Young is expected to fill in for Ventrone's spot. Cousins practiced a little this week, but the Browns don't really need an extra offensive lineman on gameday; John Greco was active last week and never even played.

The "big" change you'll noticed is that I have Hardesty listed. Hardesty did not take a single snap on offense last week. This week, Ogbonnaya was listed as a full participant in practice as he recovers from a preseason ankle injury. He is more valued on special teams than Hardesty, and with Carder and Ventrone possibly inactive -- two guys who played a lot on special teams in Week 1 -- it would be worth having him active.

Here are a few notes and tidbits I was unable to mention during the week, but still wanted to cover. On Tuesday, the Browns released OG Jeff Shugarts from the practice squad. They replaced him with OL D.J. Young. Young was signed as an undrafted free agent by the Arizona Cardinals in 2011 and spent most of the year on their practice squad before being called up to their active roster in Week 17. Young hails from Michigan State University. It's interesting to notes that unlike Shugarts, who was a guard, Young is noted as being a left tackle. When Levi Brown went down for the Cardinals this offseason, Young started the team's first preseason game at left tackle. Obviously he didn't win the job, but you wonder if that spells any trouble for Oniel Cousins in the future. If Young looks good on the practice squad, it gives the Browns the option to waive Cousins at some point and then re-sign Shugarts to the practice squad.

In former Browns-related news around the league, after being inactive in Week 1, the Jaguars also gave up on wide receiver Brian Robiskie and released him. In Seattle, tight end Evan Moore only saw one snap on offense, but could see some more work in Week 2 as he gets more acclimated to the offense. Over in Oakland, I am a little giddy about the fact that Coye Francies was promoted to the team's active roster. Those who have read the site for awhile know that I always had an obsession with Francies' potential. In our final tidbit of news, the Browns reached an injury settlement with CB Antwuan Reed and DT Scott Paxson last week. The Akron Beacon Journal reports that the Browns can actually re-sign Paxson later in the season if they so choose to, which was a surprise to me. Reed cannot be re-signed by the Club, per the ABJ.